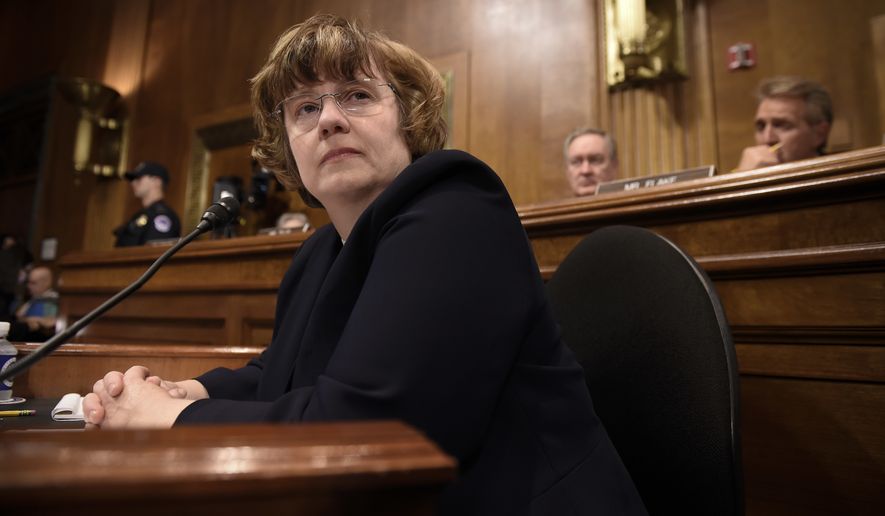 The prosecutor hired to question Christine Blasey Ford at the recent Judiciary Committee hearings, Rachel Mitchell, has written a memo to the committee.  Mitchell said she would never bring a case against Kavanaugh based on Ford’s testimony.  From the Washington Times:

The memo, written by the sex-crimes prosecutor Republicans hired to question Christine Blasey Ford and Judge Kavanaugh at last week’s dramatic hearing, points to numerous inconsistencies and lack of corroboration for Ms. Blasey Ford’s account of the sexual assault she says she suffered when they were in high school 36 years ago.

Rachel Mitchell, the prosecutor, said not only wouldn’t she bring a criminal case based on Ms. Blasey Ford’s account, but she also doubts it would even be a winning case in a civil suit, where the standards of proof are lower.

Ms. Mitchell said the case is even weaker than “he-said, she-said” because it’s completely uncorroborated.

TO: All Republican Senators

Please permit me this opportunity to present my independent assessment of Dr. Christine Blasey Ford’s allegations against Judge Brett Kavanaugh. Before I do this, I want to emphasize two important points:

“As I have said, I’m committed to providing a forum to both Dr. Ford and Judge Kavanaugh on Thursday that is safe, comfortable and dignified. The majority members have followed the bipartisan recommendation to hire as staff counsel for the committee an experienced career sex-crimes prosecutor to question the witnesses at Thursday’s hearing. The goal is to de-politicize the process and get to the truth, instead of grandstanding and giving senators an opportunity to launch their presidential campaigns. I’m very appreciative that Rachel Mitchell has stepped forward to serve in this important and serious role. Ms. Mitchell has been recognized in the legal community for her experience and objectivity. I’ve worked to give Dr. Ford an opportunity to share serious allegations with committee members in any format she’d like after learning of the allegations. I promised Dr. Ford that I would do everything in my power to avoid a repeat of the ‘circus’ atmosphere in the hearing room that we saw the week of September 4. I’ve taken this additional step to have questions asked by expert staff counsel to establish the most fair and respectful treatment of the witnesses possible.”

That is how I approached my job. There is no clear standard of proof for allegations made during the Senate’s confirmation process. But the world in which I work is the legal world, not the political world. Thus, I can only provide my assessment of Dr. Ford’s allegations in that legal context.

1 In the legal context, here is my bottom line: A “he said, she said” case is incredibly difficult to prove. But this case is even weaker than that. Dr. Ford identified other witnesses to the event, and those witnesses either refuted her allegations or failed to corroborate them. For the reasons discussed below, I do not think that a reasonable prosecutor would bring this case based on the evidence before the Committee. Nor do I believe that this evidence is sufficient to satisfy the preponderance-of-the-evidence standard.

Dr. Ford has not offered a consistent account of when the alleged assault happened.

Dr. Ford has struggled to identify Judge Kavanaugh as the assailant by name.

When speaking with her husband, Dr. Ford changed her description of the incident to become less specific.

Dr. Ford has no memory of key details of the night in question—details that could help corroborate her account.

Her inability to remember this detail raises significant questions. She told the Washington Post that the party took place near the Columbia CountryClub. The Club is more than 7 miles from her childhood home as the crow flies, and she testified that it was a roughly 20-minute drive from her childhood home. She also agreed for the first time in her testimony that she was driven somewhere that night, either to the party or from the party or both.  Dr. Ford was able to describe hiding in the bathroom, locking the door, and subsequently exiting the house. She also described wanting to make sure that she did not look like she had been attacked. oBut she has no memory of who drove her or when. Nor has anyone come forward to identify him or herself as the driver. o Given that this all took place before cell phones, arranging a ride home would nothave been easy. Indeed, she stated that she ran out of the house after coming downstairs and did not state that she made a phone call from the house before she did, or that she called anyone else thereafter.

Dr. Ford’s account of the alleged assault has not been corroborated by anyone she identified as having attended—including her lifelong friend.

Moreover, Dr. Ford testified that her friend Leland, apparently the only other girl at the party, did not follow up with Dr. Ford after the party to ask why she had suddenly disappeared.

Dr. Ford has not offered a consistent account of the alleged assault.

In her letter, she stated, “I locked the door behind me. Both loudly stumbled down the stairwell, at which point other persons at the house were talking with them.”  She testified that Judge Kavanaugh or Mark Judge turned up the music in the bedroom so that the people downstairs could not hear her scream. She testified that, after the incident, she ran into the bathroom, locked the door, and heard them going downstairs. But she maintained that she could not hear their conversation with others when they got downstairs. Instead, she testified that she “assum[ed]” a conversation took place.

According to the Washington Post’s account of her therapy notes, there were four boys in the bedroom in which she was assaulted. She told the Washington Post that the notes were erroneous because there were four boys at the party, but only two in the bedroom. o In her letter to Senator Feinstein, she said “me and 4 others” were present at the party. In her testimony, she said there were four boys in addition to Leland Keyser and herself. She could not remember the name of the fourth boy, and no one has come forward. o Dr. Ford listed Patrick “PJ” Smyth as a “bystander” in her statement to the polygrapher and in her July 6 text to the Washington Post, although she testified that it was inaccurate to call him a bystander. She did not list Leland Keyser even though they are good friends. Leland Keyser’s presence should have been more memorable than PJ Smyth’s.

Dr. Ford has struggled to recall important recent events relating to her allegations, and her testimony regarding recent events raises further questions about her memory.

Dr. Ford could not remember if she showed a full or partial set of therapy notes to

▪ She does not remember whether she showed the Post reporter the therapist’s notes or her own summary of those notes. The Washington Post article said that “portions” of her “therapist’s notes” were “provided by Ford and reviewed by” the Post. But in her testimony, Dr. Ford could not recall whether she summarized the notes for the reporter or showed her the actual records. o She does not remember if she actually had a copy of the notes when she texted the

▪ Dr. Ford said in her first WhatsApp message to the Post that she “ha[d] therapy notes talking about” the incident when she contacted the Post’s tipline. She testified that she had reviewed her therapy notes before contacting the Post to determine whether the mentioned anything about the alleged incident, but could not remember if she had a copy of those notes, as she said in her WhatsApp message, or merely reviewed them in her therapist’s office.

She claimed originally that she wished for her story to remain confidential, but the person operating the tipline at the Washington Post was the first person other than her therapist or husband to whom she disclosed the identity of her alleged attacker. She testified that she had a “sense of urgency to relay the information to the Senate and the president.” She did not contact the Senate, however, because she claims she “did not know how to do that.” She does not explain why she knew how to contact her Congresswoman but not her Senator.

It would also have been inappropriate to administer a polygraph to someone who was grieving.

Dr. Ford’s description of the psychological impact of the event raises questions.

The date of the hearing was delayed because the Committee was informed that her symptoms prevent her from flying. But she agreed during her testimony that she flies “fairly frequently for [her] hobbies and … work.” She flies to the mid- Atlantic at least once a year to visit her family. She has flown to Hawaii, French Polynesia, and Costa Rica. She also flew to Washington, D.C. for the hearing. Note too that her attorneys refused a private hearing or interview. Dr. Ford

testified that she was not “clear” on whether investigators were willing to travel to California to interview her. It therefore is not clear that her attorneys ever communicated Chairman Grassley’s offer to send investigators to meet her in California or wherever she wanted to meet to conduct the interview. 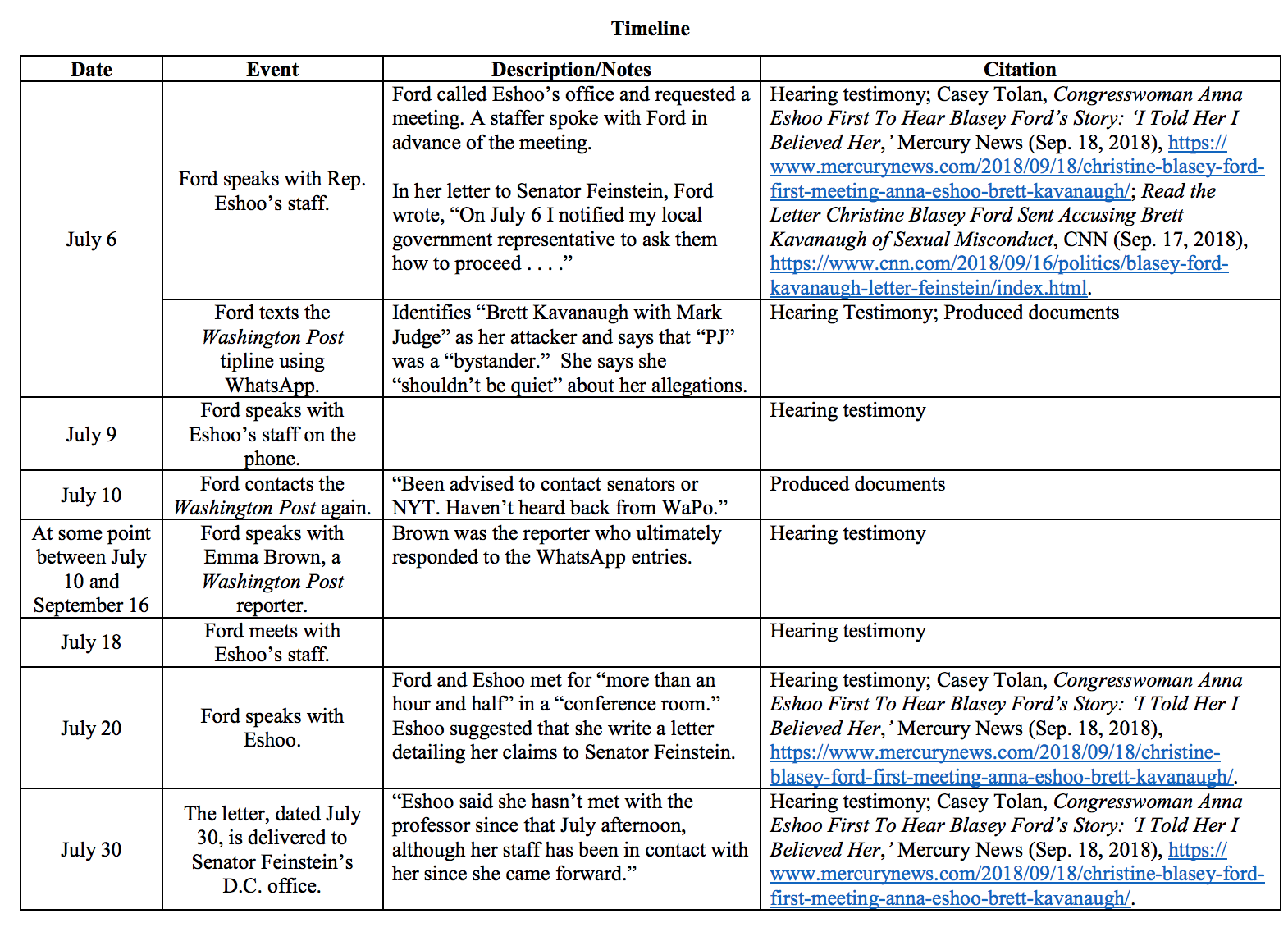 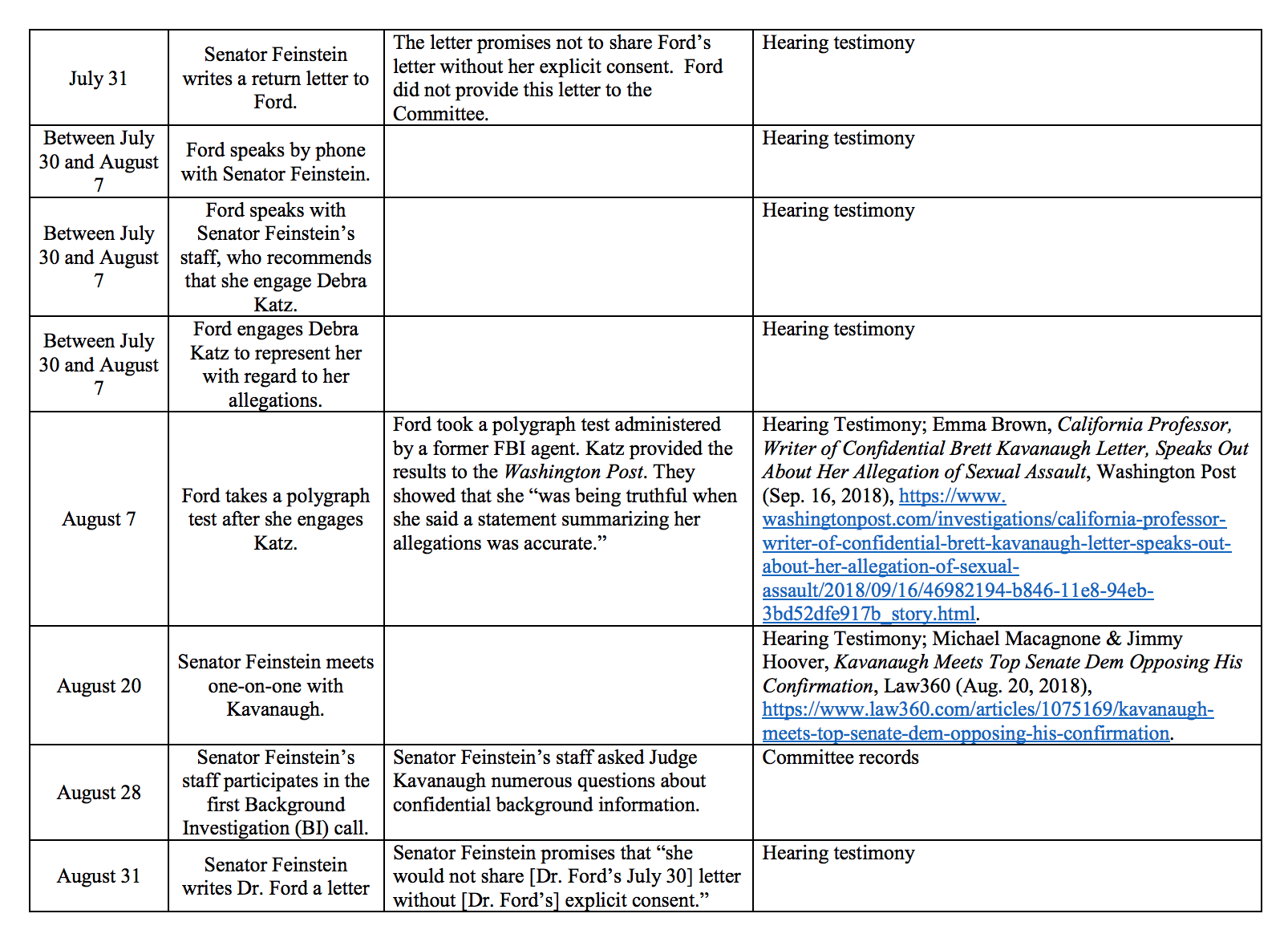 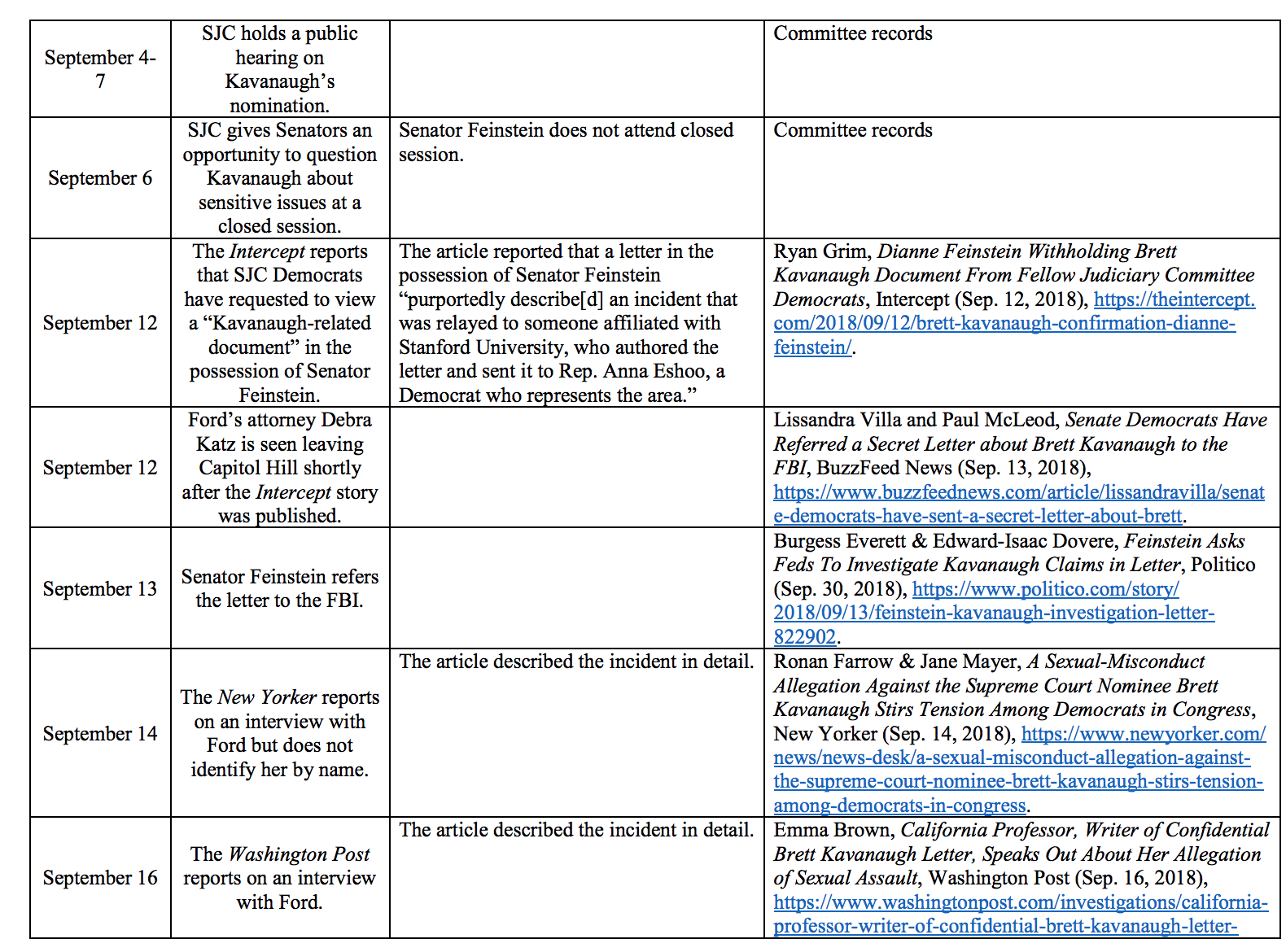