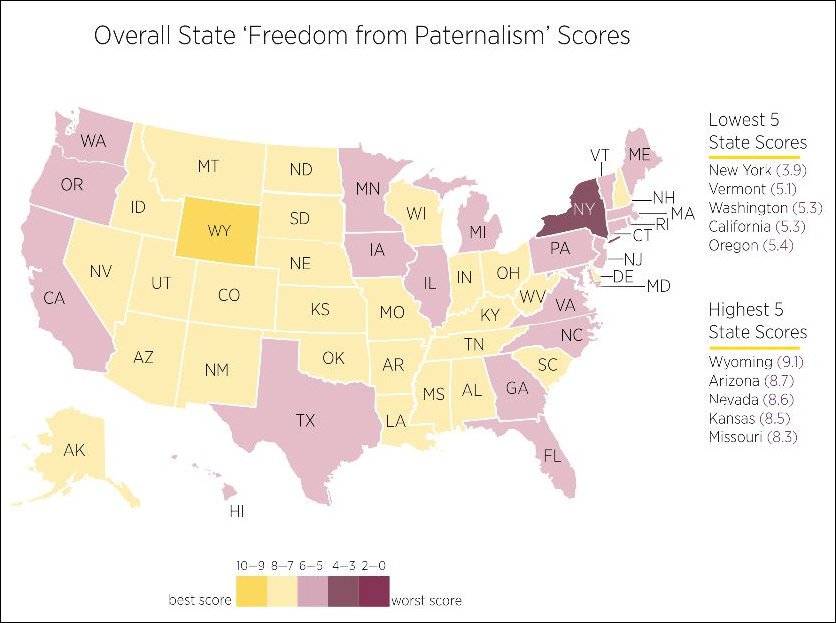 To put Steve Haner’s recent post about the Virginia lottery in broader perspective, I have displayed the “freedom from paternalism” ranking of the 50 states published this year by George Mason University’s Mercatus Center. Virginia ranks 39th in freedom from paternalism. The flip side of that finding is that the Old Dominion ranks as the 12th most paternalistic state in the country.

By “paternalistic,” Mercatus researchers Russell S. Sobel and Joshua C. Hall, professors at the Citadel and West Virginia University respectively, mean state policies that the political class has decided are for your own damn good.

If you don’t like a busybody government, then New York is the state from hell, with a ranking in a class all by itself. Vermont, Washington, and California are other hard-core busybody states. If you’re a freedom junky, head to Wyoming, the least meddlesome state in the country. Arizona, Nevada and Kansas also are among the least intrusive.

The Mercatus ranking breaks down paternalism into three buckets of policies — selective taxes, “saint subsidies,” and miscellaneous bans and regulations. Virginia scores pretty darned meddlesome across the board. On the less paternalistic side, Virginia has no soda tax and a low cigarette tax but it has a killer tax on distilled spirits.

The ranking encompasses such policies as plastic bag bans, happy hour restrictions, mandatory motorcycle helmets, fireworks restrictions, blood tests, social gambling and Internet gambling. To the point of Steve’s post about the state lottery, Mercatus does not include the presence of state lotteries, horse race betting, or casino gambling.

Why is Virginia so paternalistic? It is often observed that Virginia is either the southernmost Northern state or the northernmost Southern state. I’d hypothesize that we have incorporated the most meddlesome traits of both North and South — Bible Belt blue laws inherited from our Protestant past and the Northern progressives’ instinct for economic regulation on environmental, consumer and other grounds. One way or the other, if you’re a libertarian, you live in enemy occupied territory.

Well, when the lawmakers meet in downtown Richmond every January and propose over 2000 new laws each year, with over 1000 being passed and signed, is it any wonder that we have paternalism in Virginia? Nothing but a con job on ignorant taxpayers.

Also, the title should be Catholics, Corruption, and Paternalism. Far more fitting.

Good article. But there is a difference between a busybody government and making people pay for the health damage they cause. For example, since obesity and diabetes exact a huge – and I mean HUGE COST – on our health care system, I really like the idea of moderately steep sugar and fat taxes (e.g. on soda and excessively fatty foods like Big Macs) to cover the drain imposed by these unhealthy liquids and foods. Don’t want to pay the taxes? Then eat healthy. You see, Mr. Bacon, I believe people who do not give a crap about their health, also do not give a crap about us taxpayers. This is not an “imposition on their freedom,” but rather making them pay for the damage they have caused – and will cause. Obesity is not only very unhealthy, it is very expensive. If people want to indulge themselves, fine. They have the freedom to do so. But I want them to pay for it – and that includes ALL PEOPLE.

I like our ABC.
For those who desire to have the privatization of alcohol I say;
1) We don’t have minors shoplifting it.
2)You never hear of liquor store robberies in Virginia.
3)Then it is not on every corner there preying on the weak and poor.

For the chuckle;
Uranium mining, do we really need this?
If so won’t the Hildabeast just sell it to Russia?

Would work the same if each man had to pay for his own health care, as in days of old. There’s no faster way to get the message (healthier habits, etc.) to the brain than through the wallet.

Interesting choice of words… I see you….