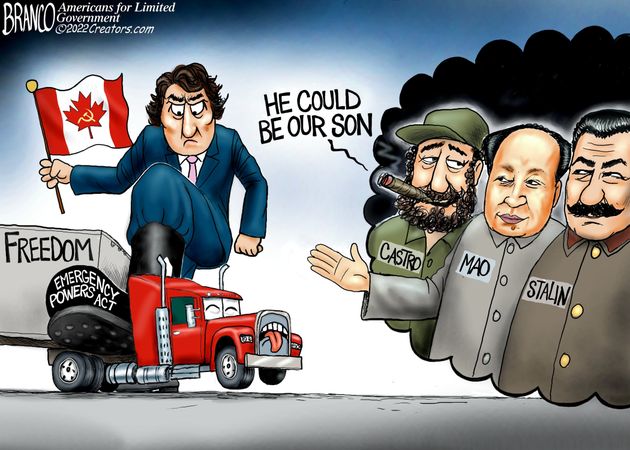 I was listening to the radio and a discussion took place about the Peopleâ€™s Convoy to DC.  The individual on the telephone said that he had contributed to the Convoy, but had gone to a local convenience store and purchased anonymous gift cards to send.  His point was that the global fascist takeover of Canada had caused him to think about how to contribute, and even though he was an American Citizen who favored the American trucker convoy he was changing his behavior.  Was his decision based on prudence or fear of eventual retribution?

A single mother in Canada with 4 children had her bank accounts and other financial instruments frozen.  She hadnâ€™t directly participated in the activities in Ottawa, but she had contributed to the Canadian Freedom Convoy 2022 using givesendgo.com.  This turned her into a target of Trudeauâ€™s communist and socialist government.  (There are additional concerns about her employment.  Would any of her three employers decide that she is a liability and terminate her employment.)

There are other interesting stories about Trudeauâ€™s tyranny:Â  A Canadian who has a podcast on Youtube was told that he should shut down as the commentary is too critical of Trudeau.Â  There is the leftist news mediaâ€™s use of doxxed information to contact people who contributed to the truckers.Â  There are also postings on Ottawa telephone poles that display the names of Ottawans who contributed to the truckers.Â  Obviously, all of this is for intimidation and retribution purposes.Â Â

What is most significant is that Trudeauâ€™s use of the Emergency Act has gone from temporary to control the trucker protests to permanent without any defined need.Â  To buttress the permanence, Trudeau has not only employed Canadian police but UN paramilitary forces.Â  Many of the arrested Canadian protestors are now being held for â€œmischief makingâ€ without the benefit of judicial process.Â  This is quite like what is being done in DC to the January 6th protestors.Â Â

How will the Canadian people react to the sudden loss of their liberty?Â  Will they fall for the totalitarian leftâ€™s idiotic idea that cries for freedom equate to extremism and racism?Â  Will they be consumed by fear of a â€œknock at the doorâ€?Â  Time will tell â€“ and I hope the bell will not toll for Americans. Â  (By the way, if you honk your horn twice that means â€œHeil, Hitlerâ€.)

In anticipation of the American trucker protestor coinciding with the Biden State of the Union, fencing is going up around the Capitol.  The DC police have been alerted and the National Guard has been recruited.  The Secret Service, FBI, and various intelligence agencies are also involved.  The American truckers have said that they will be peaceful and will protest the COVID mandates by driving around the DC Beltway and holding some freedom rallies away from the Capitol.

There are now obvious questions about the usage of the American Patriot Act.  While it is designed to deal with terrorism, what is to stop it from targeting a single mother of 4?  Will the politicians of the left who now control the Congress and Executive restrain themselves from employing this legalistic tool against average American citizens?  (The Canadian parliament, dominated by the communists and socialists, did NOT vote to roll back Trudeauâ€™s tyrannical power grab.  The message of the peaceful Canadian truckerâ€™s protest was thus rejected.)

One final thought here.Â  â€œPrudence is no doubt a valuable quality, but prudence which degenerates into timidity is very seldom a path to safetyâ€.Â  This is a quote by noted English statesman, Robert Cecil, 1st Earl of Salisbury â€“ who lived about 500 years ago.Â Â Â Â

Supposedly,Trudeau ended the emergency. Somebody apparently didnâ€™t get the message. Some 39 and counting truck business were put out of business after the emergency was ended. More dirty tricks from the tyrants.

“This turned her into a target of Trudeauâ€™s communist and socialist government.” What an insane thing to say

The bigger concern is how Information Technology (IT) has become the handmaiden of fascists. Fascists love centralized power that they control, and IT is the heartless plantation overseer that makes it happen.

We need a revolution of IT professionals that will organize and stand for constitutional rights just like the truckers are doing. We are now at the point where the Government can flip a switch and turn off your life. That is a big, big problem.

I was recently told that the major banks are instituting a social credit score to go along with the existing financial credit score. This is the Chinese system imported to America.

you were told that, were ya?

It is a problem. In fact, I recently read that New Hampshire was debating a bill to outlaw the practice. I would point you in the right direction but your comments indicate how intellectually lazy you are. You need the mental exercise. Look it up on something called G-O-O-G-L-E

He is a radical anti-American socialist. Problem is he never has anything to say of significance.

One of his stated goals (paraphrasing): is to “choke DC like a boa”, to punish the residents for how they voted

**news flash, DC doesnâ€™t have any congressional representation to vote for/against the mandates heâ€™s so against (that are also being rescinded as we speak so heâ€™s a little late to the party) so it doesnâ€™t matter how the residents of DC voted

And finally, good ol Mr Bob Bolus did time in the pokey for insurance fraud about a decade ago.

Another peach to hook your proverbial wagon to, ?â€â™‚ï¸

Being Scranton-born myself, I am surprised they got that many letters correct. And I doubt they have enough money for gas all the way to DC. I’ll find out next week.

I just gave them $25. Will be interested to see how I am treated under the Patriot act.

Unless there has been a radical change to my native land, that’s $5 for gas, and $20 for beer.

Then I should up the amount.

Iâ€™m sure he appreciates it to go towards replacing the 2 tires on his unroadworthy piece of shit truck. Have to wonder what else isnâ€™t up to par on that thing. Oooo, but if DOT pulled his ass over for a safety inspection to protect other people from his dumbass, that would be â€œtryannyâ€ (sic)

“Just to show the American people things are going the wrong way right now. Hopefully we can get back on track,”

Theyâ€™re sure showing something.

DC votes for the president is one example.

So does the rest of the US. Are you now advocating that any and every nitwit should go around protesting and harassing those who donâ€™t vote the way he or she thinks they should?

That’s exactly what the Left has been doing for the past 20 years. Ask Senators Manchin and Sinema how personal the attacks can be.

A friend of mine and I were discussing the recent death of an associate. My friend was wearing a MAGA cap. Out of the blue some lady came and began berating both of us. So I know just how personal these attacks can be. When you respond with personal attacks, as is the case with Martin, there is no point in trying to debate based on facts and reason. This is really troublesome because it is not possible for any sort of accommodation is facts and reason are replace by screaming and yelling.

Better yet, go get that shitbox truck fixed.

Can Republicans (again, I purposely didnâ€™t use the word conservative) not choose the numbskull faction as their hill to die on. And no, Iâ€™m not much into â€œwhataboutismâ€. How about clean your own house up first before whining about the neighborâ€™s

I was told that the Canadians still possess arms.

I was told that the Americans still possess arms. Do they have the stomach to fight. It appears that the Canadians are perfectly happy marching around, singing the national anthem, and doing nothing much now that the tyrant has crushed the trucker’s protest. Post WW2 a thug like Trudeau would have been strung up by his thumbs and whipped.

For Americans to actually take up arms, they need the support of one (an preferably several) governors. Absent that, they would be crushed.

The founders didnâ€™t need a political supporter of the king to tell them what to do.