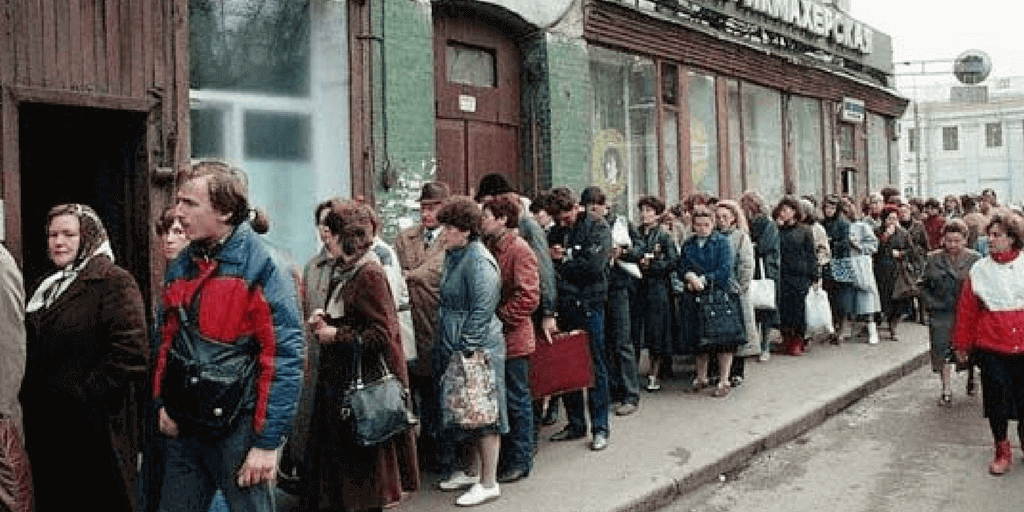 Public Shaming of a Hoarding Comrade

People used to ask me what we ate when I was growing up in communist Eastern Europe. Women were quite thin and beautiful, on the “Ceausescu diet.” We were not just told how much to eat by decree but food was quite scarce and highly rationed. If a person dared to stash more food than the Communist Party deemed necessary, that person paid dearly in fines and eventually jail. Of course the elite class, in the classless utopia of a socialist country on its way to communism, had its own stores and food supply at low prices, never having to suffer the indignity of a rumbling empty stomach.

The heaping single plates of meat I see in American restaurants today would feed a family of three for quite a while. My mom, who is quite thin now in her advanced age, joked that she is back to the Ceausescu era thinness. In those times, if a person was overweight, others told them with a tone of envy, how good and fat they looked; they had found enough food and prosperity to afford to eat and gain weight without being investigated, shamed at work, or fined.

When the dear leader wanted to visit a grocery, dairy, or bread store to see how “his people” lived, fresh bread loaves and milk bottles were trucked in and then taken away as soon as he left. Staples like cooking oil, sugar, flour, and butter were also brought in from the communist apparatchiks’ stores and then whisked away before anyone had a chance to purchase anything.

The bread, milk, butter, oil, flour, and sugar lines were part of daily life and the socialist milieu. Walking around money was not to bribe politicians but to purchase food or scratchy and splintery toilet paper in case one encountered a long line where something needful would be sold that day.

In addition to fines and possible jail time, food hoarders were publicly shamed in the local and national newspapers which were run by the Communist Party.  Since their address was also provided, the readers were expected to ostracize them and sometimes beat them for their greed.

Such was the case of Baciu Viorel from Tirgu-Mures, domiciled on 1 Brasov Street, who decided to stock food for himself, perhaps his extended family, and maybe intending to sell some for profit to those who did not have time or stamina to stand in endless lines. The economic police raided his house and found too many bottles of cooking oil (34) and 26 kg of sugar in his pantry. 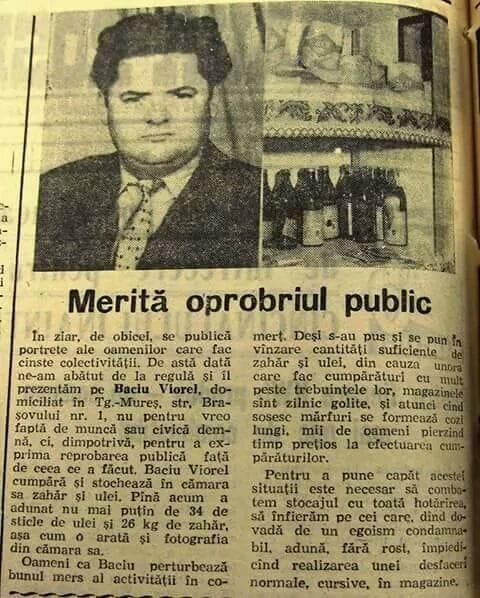 Obviously well-fed when compared to the gaunt proletariat, this man was presented as the enemy of the collective, to be condemned and derided. The 1980s article said that “Men like him disrupt normal commercial activity. Even though there are sufficient quantities of sugar and oil in stores, because of people like him who buy in excess of what they need, the stores are emptied daily. When food arrives, long lines form, causing thousands of people to lose precious time shopping. To end this situation, it is necessary to combat such hoarding, to brand those who are so selfish as to gather large quantities of food, interrupting normal commerce in stores.”

Having experienced the indignity of standing in endless lines in cold and hot weather to buy rationed food with rationing cards, food that often ran out before everyone in line had a chance to buy something, it is economically ludicrous to believe the Communist Party lies that one man’s hoarding disrupted delivery of enough food to the starving proletariat.

It was the inadequate supply of everything that caused severe shortages of many items that Westerners take for granted in economies based on supply and demand. It was the centralized planning of economically ignorant community organizers who formed the Communist Party rank and file who made ill-advised production, supply, and distribution decisions.

Did Viorel deserve public opprobrium because he tried to survive by selling extras on the black market, the market the ineptitude of a socialist/communist regime had created? Who can blame him for hoarding food when nobody knew if they would find anything to eat the next day, when people fought in lines over bones stripped clean of any meat? Yet people used those bones to make soup. Extras in the pantry insured survival for many days without having to stand in those awful lines every day.

Was Viorel causing the long lines? Of course not, but socialists and communists are not known to be rational thinkers, they are indoctrinated sheeple who memorize and repeat what they are told without question, in exchange for special benefits.

When it comes to survival, other people were willing to pay the black market higher price in order to have food for their families without standing in line.