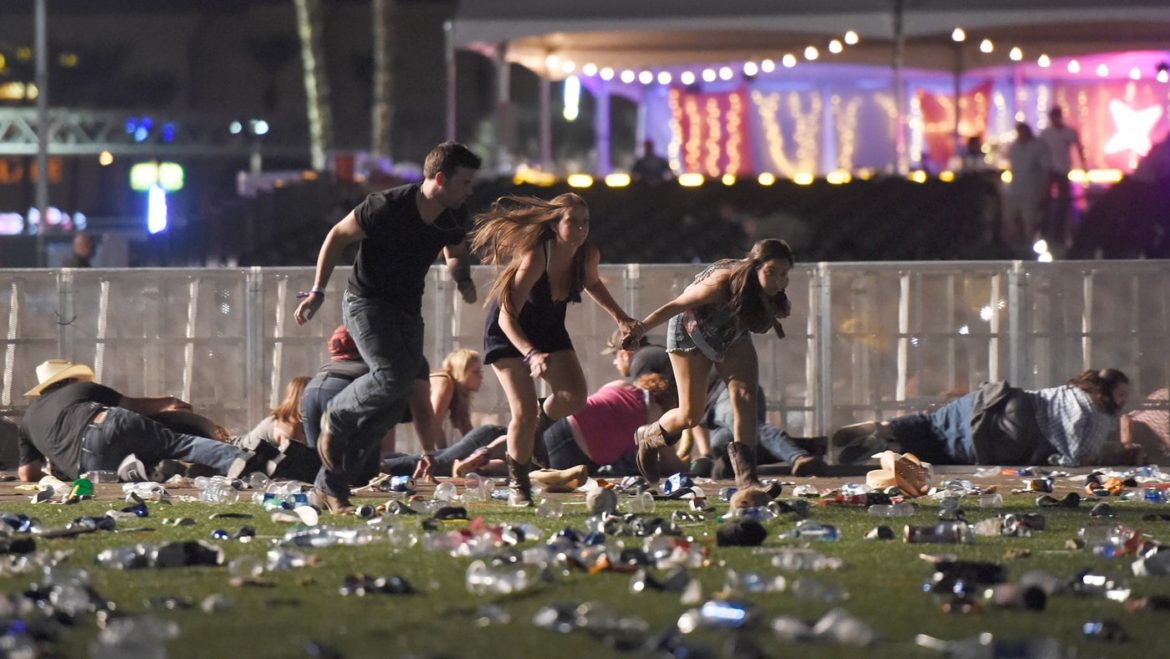 I start an article with a quote from Lt Colonel Tony Shaffer, “I think it’s shaping up to be a very deliberate act of terror. This is beyond dispute. The question becomes motive. Everybody seems to be searching for a motive. I would argue most of the clues of motive are right in front of us… It was a politically selected target… This is the perception base on information. The perception was going to be a lot of pro-gun folks there, Trump supporters at this concert. So therefore, I believe the perception was, by the shooter, by Paddock, this was a legitimate target of political expression. —- this may be something people don’t like to understand but the very reason that Hodgkinson did what he did, and I believe Paddock did what he did, is because the left has now encouraged the use of violence as an extension and use of political speech.”

Academics, entertainers and Democrat politicians have been screaming that the Trump presidency is illegitimate, and they have been doing so since the November 2016 election.  Each verbal and visual assault on Trump has gotten evermore shrill and violence oriented.  Campus leftists talk themselves into becoming emotionally outraged and attack conservatives or even liberals with non-conforming ideas.   Antifa, a product of the European socialist and communist ideology, freely admits that they will do whatever it takes to suppress any dissent from their orthodoxy.  BLM has essentially taken over the NFL playing field and the ticket buying fans be damned.  La Raza, and a wide variety of Democrat politicians, have said that they intend to destroy the borders of the United States.  The American Republic is under attack.

At this point, Shaffer’s analysis is the most cogent explanation of how the radical left in America is pushing psychopaths to commit violence in the name of social justice.  The chaos and outright anarchy stemming from the left creates a climate of instability not only in society but in the minds of already mentally confused individuals.  In the case of the Scalise shooting, the perpetrator was a Sanders supporter.  He felt justified in killing Republican leaders in government.  To say he was a violent radicalized leftist is indisputable.   Now, if Shaffer is correct, Paddock has taken a further step.  Not only is the killing of elected Republicans acceptable but also the killing of individual Republicans who believe in the Second Amendment and the Constitution.  These anti-constitutional ideas have been echoed by individuals in news organizations such as CBS and by college professors advocating the killing of white people to purify the nation.

I cannot state that Paddock is a psychopath.  He has virtually no electronic footprint and appears to be an “off the grid” ghost of some kind.  Thus, there are far too many facts still to be uncovered.  However, what is certain is that the left is pushing psychopaths to violence – and if they do not stop there will be much more violence with ever escalating death and injury numbers.

Interesting little aside. Hillary Clinton referred to her opponents as a “basket of deplorable” in September 2016. Paddock bought 33 addition rifles starting in October 2016 and ending in September 2017. If, as Warren suggests, Hillary’s comment goaded Paddock into committing the Las Vegas massacre, then Hillary owes an explanation and an apology. Doubt either will occur.

not surprised that you are making up stuff again – what about the stories that this guy was pushed to kill by the white supremacy movement and that he was reacting to all the pressure to rid the country of foreigners – oh wait, I made that up just as you made up the part about hillary – see, we won’t make any progress when you rely on the voices in your head or those coming from Alex Jones for reason

See, you are making stuff up, I am quoting from the news.

If you want me to make something up, how about this was a gun running bust gone bad and that is why the FBI is so closed mouth. Of course, my favorite is that Paddock was ISIS and had an attack team waiting to be armed by him but something happened at the last minute. After all, there was a woman screaming in the crowd that everyone was going to die some 45 minutes before the attack. Then there is your theory which is utterly nonsensical as most of folks in the crowd were white. However, maybe you have a point except it wasn’t the white supremacy movement but the antifa movement. Then again, maybe it was the black live matter movement and he is sympathetic with Rachel Dozegal. To be really sinister, maybe he was a cartel member and the cartel’s were getting too much heat because the border was actually being watched so this would allow them to move drugs across the border while the authorities were distracted. Then there is the “ghost” theory that he really never existed except to do this one evil deed.

I thought this was the party/group that put forth individual responsibility for ones actions? Or is it jump on the blame train at every opportunity because, I know, “they do it too”

If guns don’t kill people, people kill people then put the blame right where it lies, at the feet of the gunman.

This childish, tit for tat bs is ridiculous. “We” (read that as, you) are no different than “them”.

Apparently, you dismiss the possibility that mentally unstable people can be goaded into insane actions. By your logic, the antifa violence has nothing to do with the antifa ideology – wow!!!!! By the way, did the NAZI death camps have anything to do with an ideology???

Other than your first sentence, (and even that is a stretch) nothing in reply has anything to do with my post.

Here’s a hint though, hitting the caps lock doesn’t remotely add to the relevance of a word.

I usually spell NAZI with caps not for emphasis but because that is the way I have seen it spelled. And, no, I answered your comment. You can blame both an individual and a motivating ideology for violence like this.

Funny that when Gabby Gifford was shot and the left claimed that threatening comments from he likes of Sarah Palin were to blame, the right, correctly said to wait for the facts. Where is your pause here? You claim this nut acted because people protest Trump but you have not facts. Why are you so quick to lay blame here when you were so quick to complain then? I think it is because you are incapable of looking at any human interaction, tragedy, celebration, or even mundane life without trying to create a non-existent issue in the hopes that you gain some political traction – shame on you for dragging these dead and injured people into your political aspirations.

Boy, you sure missed the point —

Great article. This topic hasn’t been addressed enough. Political fights are the substitute for violence and war. Political fights work well to reconcile disputes when both sides understand/agree that violence must be avoided, so both sides are motivated to find political solutions. But when one side calculates that the other side is too timid to escalate the fight, the situation becomes far more dangerous.

That is what we are approaching now. The left is far, far more casual about their own violence because they know that the right generally abhors those tactics, and can be intimidated with threats of violence. The left is making a dangerous miscalculation by justifying or excusing their own violence, which just encourages more leftist violence. And the right is making a dangerous miscalculation by assuming this escalating political violence is only isolated and transitory. The left has been driven nearly insane by Hillary’s loss, and there hasn’t been adult leadership among Democrats to confront the truth and regroup. Even the smartest people on the left seem to be insanely irrational; and they spawn more hate than enlightenment among their followers.

Your first paragraph is right on target. You should submit an article on the difference between war and peace when it comes to conflict resolution.

Oh come on now. You certainly have more to say than that unless somewhere, deep inside, you know Warren and Shaffer are correct. And you certainly can’t deny the statements proposing violence as a solution all of which are coming from your leftist buddies.

left buddies?- it seems that the radical right are the ones pushing the nazi agenda and anti-govt/anarchy solutions

I guess you missed antifa but that is not surprising. As far as the NAZI agenda that died in about 1945. The current supposed NAZIs are clowns quite unlike antifa. I would also point out that the anarchists in Baltimore and Ferguson were Black leftists not radical rightists. And finally, the right is for smaller government closer to the people – thus more state and local control not federal intrusion via such things as the rapidly failing obamacare.