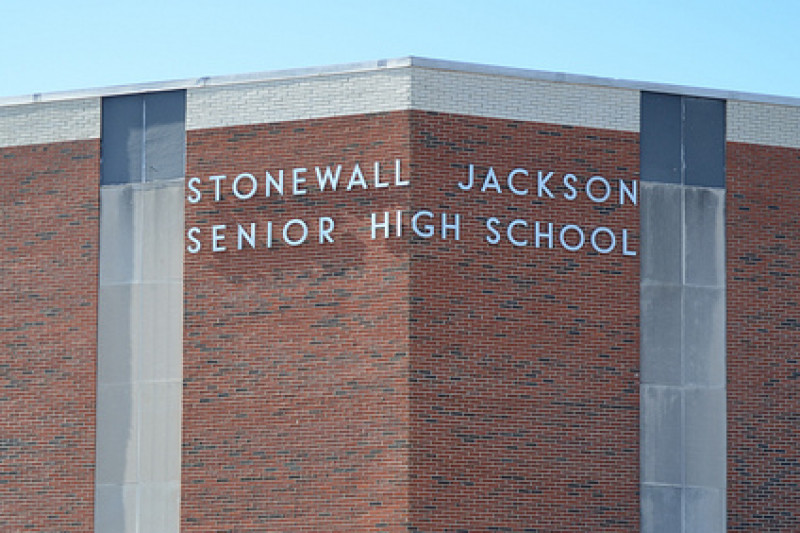 “Stonewall Jackson will certainly be honored in history, but he shouldn’t be celebrated with school names,” Sawyers said in an interview. “These aren’t people that should be looked up to with public money…This man actively fought to enslave people and prevent them from having an education and to sell off their children and their offspring. We shouldn’t have schools named after him. We just shouldn’t. It’s time to make those changes.”

I’m not the one who gave Stonewall Jackson his nickname,” Sawyers said. “It just so happens that he got it right here in Prince William County and it’s time to bring it to an end.”

(Would anyone in the world have heard of Manassas were it not for Stonewall Jackson?)

Chairman of the Board of Supervisors in Prince William County, and candidate for U.S. Senate, Corey Stewart,  has objected to this change in school names by saying it will never happen while he is Chairman.  (The ‘over my dead body approach’). Stewart says the schools were named after Stonewall Jackson “because . . . he was a good and honorable and noble man.”  Stewart has threatened to withhold funding for those schools if they proceed with a name change.  Stewart said”

Corey Stewart is correct.  Judging from the lack of response to the “Go Fund Me” page most citizens of Prince William County agree with him.

I think the bigger issue here is the amount of money involved in changing the name. While my child was rezoned to be sent to a high school further away because the two closest to us are overcrowded by 800+ and 600+ students and packed into ever increasing number of trailers, the bottom line is Ryan Sawyers is more intent on making a name for himself in his bid for Congress, rather than the welfare of the students in PWC.

OMG, this has been a strange day. First an eclipse, and then Jeanine Martin actually agrees with something Corey Stewart does.

Maybe I’ll go on this guy’s Go Fund Me Page, and pay him with Confederate money (LOL).

After i lost my previous job six months ago, i’ve had luck to find about this superb website that was a life saver… make $85 every hour and get paid at the end of each week …They offer online home-based work. My last month check after working with them for 3 months was $12000… Amazing thing about it was that only requirement for the job is basic typing and reliable internet…
If this interest you, try it out on following website❋❋❋OnlineNetCashMediaNetwork.Nice.

Correct me if I’m wrong, but there was an article in the WP about the horrible man who drive the car into the crowd and killed that woman. It cited his high school. It was not named after a Confederate General. There are no studies showing white kids that go to schools named after Confederate leaders turn out to be neo-nazis.

More leftists jumping on the bandwagon.

After spending half a million to rename Godwin school, now he wants to go after Stonewall Jackson Schools? If Ryan Sawyers were truly offended by the name Stonewall Jackson, why is it he insisted on changing the name of Godwin without even mentioning Stonewall Jackson? Someone apparently just told him that Jackson was a Southerner. I don’t think Sawyers realized that until a day or so ago.

Interesting that they won’t reveal a set of alternative names. How about Lucy and Charlie Brown. Or Snoopy. Maybe Mickey Mouse. Of Course we can always elevate some leftist icon like Steve Jobs now that he is dead.