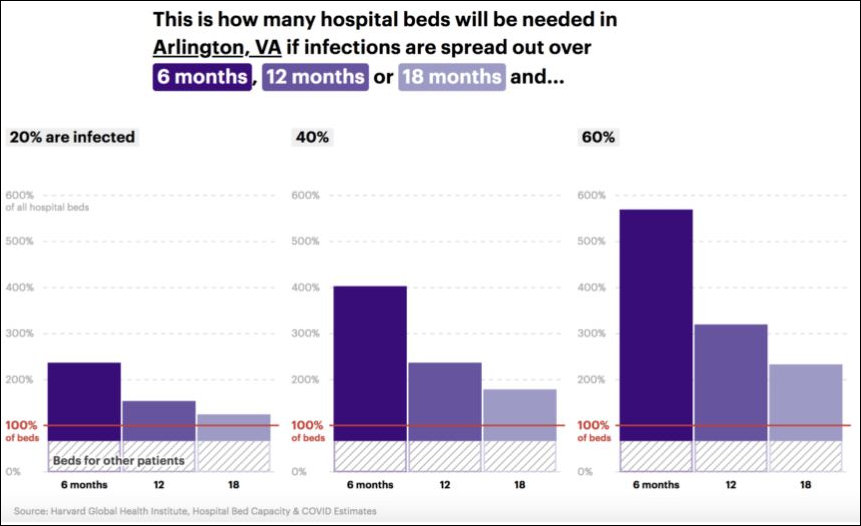 Two weeks ago, I raised the alarm: Virginia doesnâ€™t have enough hospital beds to cope with the COVID-19 virus; capacity was most constrained in Northern Virginia. Yesterday,Â Baconâ€™s Rebellion contributor Jim Sherlock explained why: Certificate of Public Need (COPN) regulation throttled the addition of hospital beds in the Northern Virginia area. NowÂ Virginia BusinessÂ magazineÂ â€” which is really stepping up its news coverage, by the way â€” explores the repercussions.

If only 20% of Virginia adults contracted COVID-19, hospitals in all metro regions across Virginia would be overwhelmed, according to data from the Harvard Global Health Institute.

The most staggering results from the Harvard study come from the Arlington hospital referral region (HHR) â€” which encompasses Fairfax County and other Northern Virginia localities. If 60% of adults were to become infected there, hospitals in the region would require an increase of nearly 600% more hospital beds to deal with the crisis. The Newport News region â€” which includes Williamsburg â€” takes a close second. Hospitals there would need nearly 500% more beds if 60% of the adult population were to be infected.

So, it is abundantly clear that Virginia does not have enough hospital beds if the COVID-19 virus continues spreading at an exponential rate. The big question is: What are we doing about it?

Virginia Business has some anecdotal answers.

One would think that the issue of acute-care hospital beds and ICU beds would be front and foremost in the minds of Northam administration officials. Maybe theyâ€™re doing something tangible to help, maybe they arenâ€™t. We just donâ€™t know, because theyâ€™re not saying. Listen to Peter Galuszkaâ€™s interview of state epidemiologist Lillian R. Peake (see previous post) for a exercise in vagueness. If this interview is any indication, the administration seems to be tracking and monitoring and interfacing a lot but not doing much.

Update:Â The Virginia MercuryÂ reports that Virginia has asked the U.S. Army Corps of Engineers to begin looking at hotels, dorms and arenas that can be converted into temporary â€œalternate care sitesâ€ to handle patients suffering from COVID-19.