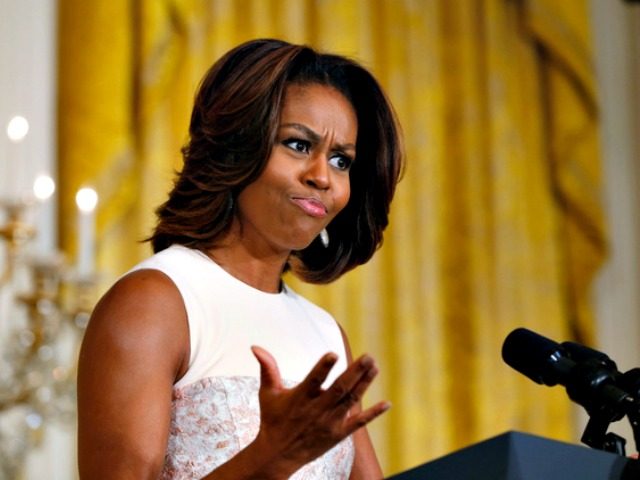 Here goes Michelle Obama again dividing our country.  She who once said “For the first time I’m proud of my country”.  She who tried to destroy children’s lunches by forcing kids to eat things they could not stand.  And now she who, in the ultimate in race baiting and division, said the following earlier this week: “At the State of the Union Address…. When you are in the room what you see is this real dichotomy.  It’s a feeling of color almost.  On one side of the room is literally gray and white.  On the other side of the room, there are yellows and blues and whites and greens.  Physically there’s a difference in color, in the tone, because on one side, all men, all white, on the other side some women, some people of color.  I look at that and I go, no wonder. No wonder we struggle, no wonder people don’t trust politics.  We’re not even noticing what these rooms look like”    http://dailycaller.com/2017/10/04/michelle-obama-all-men-all-white-gop-makes-people-distrust-politics/

This is disgusting race baiting.  The “post racial” president, Barack the Magnificent, who was supposed to bring an end to division and strife, has as his wife someone who says that white people can not be trusted.  And that the GOP is only full of white males.  Tell that to Carly Fiorina, who ran for President in 2016 and got delegates.  Tell that to Senators Ted Cruz and Marco Rubio, both of Cuban descent.  Tell that to former Louisiana Governor Bobby Jindal, of Indian descent.  Tell that to Senator Tim Scott of SC, who took Strom Thurmond’s place both in Congress and in the US Senate.  Marsha Blackburn of TN, Kristi Noem of SD.  Condoleeza Rice, the former Secretary of State during GW’s 2nd term.

Let’s go back in history a bit.  Take the late Jeanette Rankin of Montana, the first woman ever elected to the US House of Representatives from Montana, and she was a Republican.  The first African American US Senators were from Mississippi, Hiram Revels and Blanche Bruce.  And both of them were Republicans.  Frederick Douglass was a well known Republican.   It was only in the last 50 years that African Americans went for the Democratic Party.  Before that, it was Democrats who led the filibuster against the Civil Rights Act of 1965 (Sen Gore Sr. and Robert Byrd of WV – the former recruiter for the KKK), and it was Democrats like George Wallace and Bull Connor who turned the water cannons and attack dogs on African American men and women who marched for their right to vote.

I could go on and on forever, but as there are only so many hours in a day……..  But it is high time that people see Michelle and Barack Obama for what they really are and were – race baiters who divided us among ethnic and gender lines to make themselves look good.