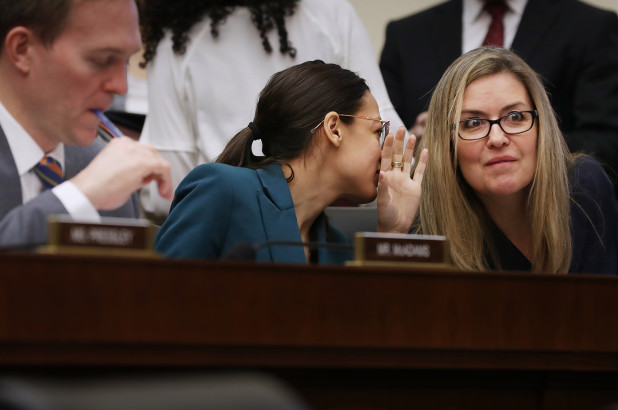 Alexandria Ocasio-Cortez (AOC) is arguably one of the least intelligent members of the US Congress. She was elected by a district that Nancy Pelosi has said would elect a glass of water if it were Democrat and that’s about what Brooklyn voters got.

There are a million memes out there decry AOC’s seemingly endless gaffes and simply ridiculous statements, the latest being that the US Government is running concentration camps along the US border.

Jennifer Wexton represents the Virginia 10th congressional district. She received her law degree from William and Mary in 1995 and has practiced law in both private practice and as Commonwealth Attorney and Judge. Wexton is a married mother of 2 children.

As you can see, the two freshman members of the House of Representatives have very little in common in their personal or professional lives.

They have very little in common at all until you look at their voting record. Would you be surprised that Wexton votes with AOC 94% of the time, according to the far left leaning ProPublica?

To be fair, agreeing with AOC on any one particular issue does not automatically revoke ones MENSA membership. Likewise, agreeing with Rand Paul or Ted Cruz on any single vote does not make one a constitutional scholar.

Loudoun and Fairfax counties are both in the Virginia 10th District, and both are predictably on most top ten lists of best-educated counties in the country. Ms. Weston’s educational and professional credentials were impressive enough not to warrant closer inspection of her intellectual prowess…until now.

Is it possible that Democrats will overlook absolutely everything, including intellect, to prevent a Republican from winning? Virginia Democrats seem determined to overlook a racist Governor and Attorney General. They also are still accepting of their Lieutenant Governor who may be a domestic abuser.

Are Alexandria Ocasio-Cortez and Jennifer Wexton two peas in an intellectual pod? It certainly looks that way on paper. Neither has voted in favor of any of the administration’s economic policies that are so wildly successful. (including the one with the economics degree)

Neither seems in favor of enforcing Clinton-era immigration laws. (including the one with the law degree). What are voters to think, that party politics are supposed to over-ride common sense, and that is ok?

The New York 14th voters are looking at primarying AOC next year with someone not likely to run off any more Amazons, and a bizarre blip in congressional history will be over. But what of the Virginia 10th?

Will Northern Virginia voters look closely at Congresswoman Wextons votes and determine if they were smart enough to represent us? Will she protect us from criminal illegal aliens, will she keep our taxes from rising? If not, a smart choice needs to be warming up in the bullpen.

AOC is winning the race to the bottom of the intellectual race. But Jennifer Wexton is only six percentage points behind. The trouble is, they could pull us all down with them! Demand smarter!