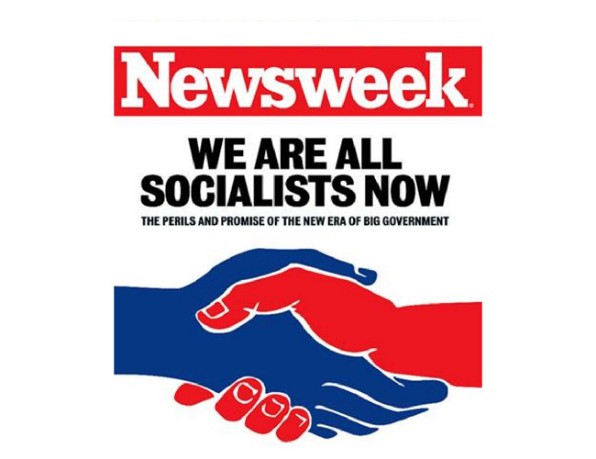 When the radical socialists in Congress and in the streets of America started giving more and more rhetorical and chanting time to Democratic Socialism, half of America were enchanted, and half of America laughed. Such a construct aimed at re-defining socialism the American way was not to be taken seriously but it was. Young Millennials, egged on by seasoned members of the Communist Party USA, were going to build a better America, a Democrat Socialist America, free of capitalism.

Their explanation was that all the former Communist Party tyrants who obliterated over 100 million of their own people and enslaved the rest for most of the twentieth century were bumbling idiots. These American socialist wannabes who did not understand economics, politics, or knew geography at all, were going to do it better and thus succeed.

Now the Democrat Socialist whippersnappers have the chance to build their American-style socialist â€œparadiseâ€ with the newly â€œelectedâ€ duo Biden/Harris. Eighty million Americans genuinely believed that an octogenarian with severe health issues and a 47-year lackluster career in Washington would be the best president for the United States. As Newsweek magazine wrote on its cover on February 16, 2009, â€œWe are all socialists now.â€

If you ask most of the resident supporters of socialism, what is democratic socialism, you will get just as many confused looks, lame attempts at definitions, and the lack of understanding of what they support. They want a â€œsocially owned economy,â€ a â€œworkersâ€™ self-management within a market socialist economy,â€ and a â€œdecentralized planned socialist economy.â€ But they have no idea what it means.

Millennials do not understand how a capitalist economy functions, what is the role of capital and profit in the development of a free market economy. They are also highly ignorant of what drove into the ground the mis-managed centralized economies of all the socialist countries of the twentieth century. They could research the economy of Venezuela, Cuba, North Korea, and China today but that is too much to ask of such brainwashed generations.

Even though the Communist Party through the Bolshevik activists promised worker self-management and a socially-owned economy, the proletariat was not allowed to manage themselves and received nothing except a meager pay, hard times, starvation, misery, long food lines, shortages of everything, endless rationing, labor exploitation by communist unions called syndicates, and gulags funded by the Communist Party that lorded over them with an iron fist via its Central Committee, the security police, and its highly centralized five-year planning of their devastating economies.

Had these American radical Marxist activists known a smidgen of history, they would have realized that the democratic socialism repackaged lies presented to them in the 21st century are repeats of those told a century ago by Bolsheviks dispatched around the globe by a well-funded cadre of communists on the payroll of bankers from the U.K. and America.

American students are now scholarly weak, ignorant, and thoroughly indoctrinated. They do not understand that security and prosperity cannot be legislated. You cannot make people equal by force of law, nor can you change their biology. You cannot steal from some and give to others in the name of social and economic justice.

You cannot legislate equal opportunity and equal outcomes. You cannot legislate inequality out of existence. Humans have been unequal since the beginning of time. Wealth and income disparity exist in the socialist economies centralized by the Communist Party and tech oligarchs.

Putting mom and pop stores and restaurants out of business creates more exploitation by large corporations that will function as oligarchies ruled by a centralized political committee of Democrat technocrats and billionaires.

Millennials should listen to and learn from those who escaped from the prison of the workersâ€™ socialist â€œparadise.â€ We lived under â€œDemocratic Socialism.â€ It was neither democratic nor did it care about the poor masses. On the contrary, the rulers stole all the wealth and property and put everyone in prison who was considered â€œbourgeois.â€ And you were part of the imagined â€œbourgeoisieâ€ if you owned a home or some land.

Under socialism ruled by the Communist Party, everyone was equally poor, miserable, and exploited with paltry wages, and no opportunity for education and progress. The poor people, that is the proletariat, had no opportunity for the constitutionally guaranteed self-governance; if they tried to demand anything they were promised, they were summarily dispatched to a gulag from which they never returned or worse yet, shot in front of their families to teach them a lesson they will never forget.

Democrat Socialists focus on redistribution of wealth by confiscating from those who worked to build wealth and giving it to those they see as having been exploited for the choices they made in life. D. Hamilton wrote that a â€œsocial democratic or democratic socialist Americaâ€ must protect minorities from â€œpredatory private employersâ€ who focus on profit and â€œexploit people and the planet.â€

To redress this exploitation, he proposes a federal job guarantee, a child trust, and reparations in a race-specific program. It is a welfare, wealth-redistribution scheme which, in his view would address the racial and economic injustice in this country.

Looking at Indiaâ€™s exodus of labor to Americaâ€™s high-tech jobs and our hiring of Indians (outsourcing) to do jobs that Americans used to do, highly skilled and educated Americans who are now unemployed because of it, it is easy to see that a job guarantee does not alleviate poverty.

Under the socialism I grew up in, everybody had a job, but it was not worth much economically and it only paid survival wages, way less than minimum wage in America. My people were what Roosevelt called â€œnecessitous menâ€ who were not â€œfree men.â€ Again, security and prosperity cannot be forced and legislated by politicians, bureaucrats, and philosophers.

Asking those who fled the socialist paradise she advocates, at great cost to them and their families, the stories are quite similar.  Living under socialism was starvation, no human dignity, a huge loss of personal freedoms, abject poverty, hunger, lack of necessities, lack of proper medical care, lack of medicines, severe oppression, loss of individuality for the good of the collective, justice for the Communist Party rulers only, and loss of private property and land.

Millennials should listen to those who escaped the socialist â€œparadiseâ€ Ocasio-Cortez promotes from her congressional platform.  Millennials should ignore the political rhetoric coming from highly unenlightened politicians with an agenda.