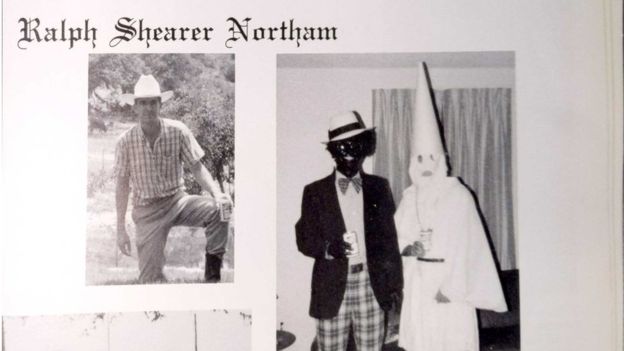 During his press conference yesterday, Virginia Governor Ralph Northam displayed shameless gall as he scolded Virginians specifically and Americans in general about their racism.

“Today we are here to be honest about our past and talk about our future,” Northam declared. “We have to confront where we’ve been in order to shape where we’re going.”  THIS coming from the man who first apologized for a photograph on his medical school yearbook page, and 24 hours later said no one — not even he — could prove whether he was in blackface or the KKK white hood.

During a bizarre press conference in February 2019, Gov. Northam told us how difficult it was to get shoe polish off his face after entering a Michael Jackson dance contest.  He even prepared to demonstrate the moonwalk dance routine until his wife whispered that it would not be appropriate under the circumstances. All the while, he was trying to convince Virginians that he didn’t know how the offensive photograph landed on his own yearbook page or how he acquired the nickname “Coonman.”

This is the same Ralph Northam who, during yesterday’s press conference, said, “The eyes can’t see what the mind doesn’t know.” I guess that’s why he keeps us in the dark about the yearbook page.  The Governor went on to speak about removing the statue of Robert E. Lee on Monument Avenue in Richmond, calling it “a symbol to shore up the cause of those who didn’t want unity after the Civil War,” those who wanted to “keep the system in place.”  What the Governor didn’t say was that the militant wing of the Democrat Party at that time was the Ku Klux Klan, whose uniforms were white robes, like the Klan photograph on Ralph Northam’s yearbook page.  It was the southern Democrat Party who wanted the “system” to survive.

“Symbols do matter,” declared Governor Northam yesterday.  He appealed to anyone watching, “My friends, I believe in a Virginia that studies its past in an honest way.  I believe in a Virginia that learns lessons from the past.  And we all know that our country needs that example right now. We need healing most of all.  Symbols do matter.”  (Symbols like blackface and Klan hoods, Governor?)

Watching yesterday’s press conference, I wondered why the African-Americans, who stood by the Governor praising his efforts to eradicate symbols of the Civil War and to promote honest conversations about our past, haven’t called for Ralph Northam to be honest about his disgraceful yearbook photo, the one he apologized for before he denied knowing about it?  The KKK hood is a sickening reminder of the very “system” he condemned when speaking about the Lee statue.  Why do they not hold him accountable, as they admonish us all to be held accountable for racism?

Governor Northam, don’t lecture Virginians about honesty and healing before you take the plank out of your own eye.  You say we need examples.  Why not be that example?  Admit your shameful part of the shameful past you now so mightily condemn.  Be honest. Ask for forgiveness.  Physician, heal thyself.

[…] the Bull Elephant, a Virginia publication for right of center Virginians.  Her entire column is here, and below are the opening […]