By most accounts, Kentucky Senator Rand Paul is the frontrunner for the 2016 GOP nod. In almost all of the major straw polls and in most of the scant scientific polling done to date, Sen. Paul maintains a lead over the likes of New Jersey Republican Governor Chris Christie, fellow Senators Marco Rubio (R-FL) and Ted Cruz (R-TX), and former Florida Republican Governor Jeb Bush. 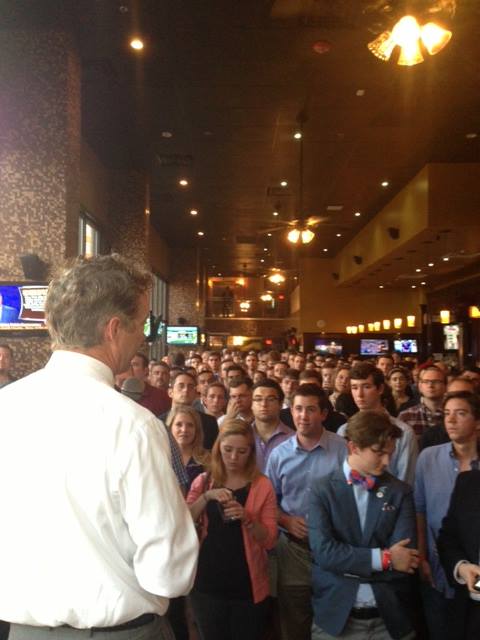 With respect to Virginia, Sen. Paul has a great deal of support within the conservative movement, and his father’s impressive presidential campaign organization here provides a very solid built-in base of activist support. Sen. Paul made news in Virginia with a visit Tuesday, where he was accompanied by Ken Cuccinelli and Pete Snyder on a tour to meet with business leaders and young professionals in Arlington. Cuccinelli, President of the Senate Conservatives Fund and former Virginia Attorney General, and Snyder, a former lieutenant governor candidate, did not offer endorsements of Sen. Paul, but were happy to make introductions to attendees at the packed events.

We like Sen. Paul, and share most of his libertarian outlook on the economy and the role of government. His views, and the unabashed way in which he presents them, have been a shot in the arm for a party that has been fairly lethargic on the national level since the close of the Bush administration. Indeed, we believe the libertarian philosophy increasingly looks likely to shape much of the future of the Republican Party. Young people increasingly tend toward libertarian ideals, and libertarians are much more likely to identify with Republicans (45%) than Democrats (5%), according to one survey. It is undeniable that Sen. Paul, and his father, have been able to extend the appeal of the Republican Party in ways no other leaders since Reagan have done.

It is equally undeniable, however, that Sen. Paul has a Ron Paul problem. When running for and serving as a Senator from Kentucky, Rand Paul has exhibited much savvier and more politically astute sensibilities than his father, demonstrating an ability to overcome some of the boulders libertarian ideology places in his path (e.g., the Civil Rights Act of 1964) in a way that Ron Paul was never able to do. But as 2016 nears, and as Sen. Paul emerges as a much more serious contender for the GOP nomination than his father ever imagined being, the elder Paul’s positions and public statements will gain a new level of scrutiny.

Exhibit Number 1: Ron Paul’s recent blog post on the controversy surrounding the downing of a Malaysian airliner over eastern Ukraine. Dr. Paul called the conclusion that Russians were behind the surface-to-air missile that brought down the flight nothing less than “government propaganda,” and like Vladimir Putin, Dr. Paul blames the whole thing on the United States.

We’re not going to engage in a detailed critique of what Dr. Paul wrote, but will say that such statements fit a long pattern. One such statement from last year sparked a visceral reaction from Del. Scott Lingamfelter, after Dr. Paul made a callous and insensitive statement about former Navy SEAL Chris Kyle, after Kyle had been murdered by a mentally unstable fellow veteran Kyle had been helping to readjust to civilian life. Paul even reportedly opposed the initial military action in Afghanistan, while the ruins of the World Trade Center still smoldered in lower Manhattan, on a “chickens home to roost” kind of basis.

Notice a recurring theme? Each of these episodes involve some sort of hostility toward American foreign policy (under both Republicans and Democrats), and in particular the use of military force. In this respect, the elder Paul has been described as having “the foreign policy views of Jeremiah Wright,” by Washington Post editor Charles Lane, and like Wright, Dr. Paul has been caught saying things that have people thinking he wants to give Israel “back” to the Arabs.

Don’t get us wrong. There is much to commend the intellectual basis for the Paulian “non-interventionism” approach to the United States’ role in the world, and it’s a philosophy that a lot of moderates and independents can buy into. But to your average Republican primary voter, when Ron Paul talks this way a lot of it strikes the ear as radical kookiness. A lot of voters who are attracted to the libertarian philosophy domestically are nonetheless skittish about what is tantamount to surrendering the world stage to bad actors who would fill the void left by a newly “non-interventionist” America. Rand Paul gets this, and to the extent he has spoken about foreign policy he has take a much more pragmatic approach than his dad, notably avoiding the sort of “blame America first” traps his father has fallen into on occasion.

But as long as Ron Paul continues to write and speak out on these issues, Rand will continue to have this problem among the voters who will choose the nominee in 2016. His opponents like Cruz, Christie, and Rubio will make sure of it.