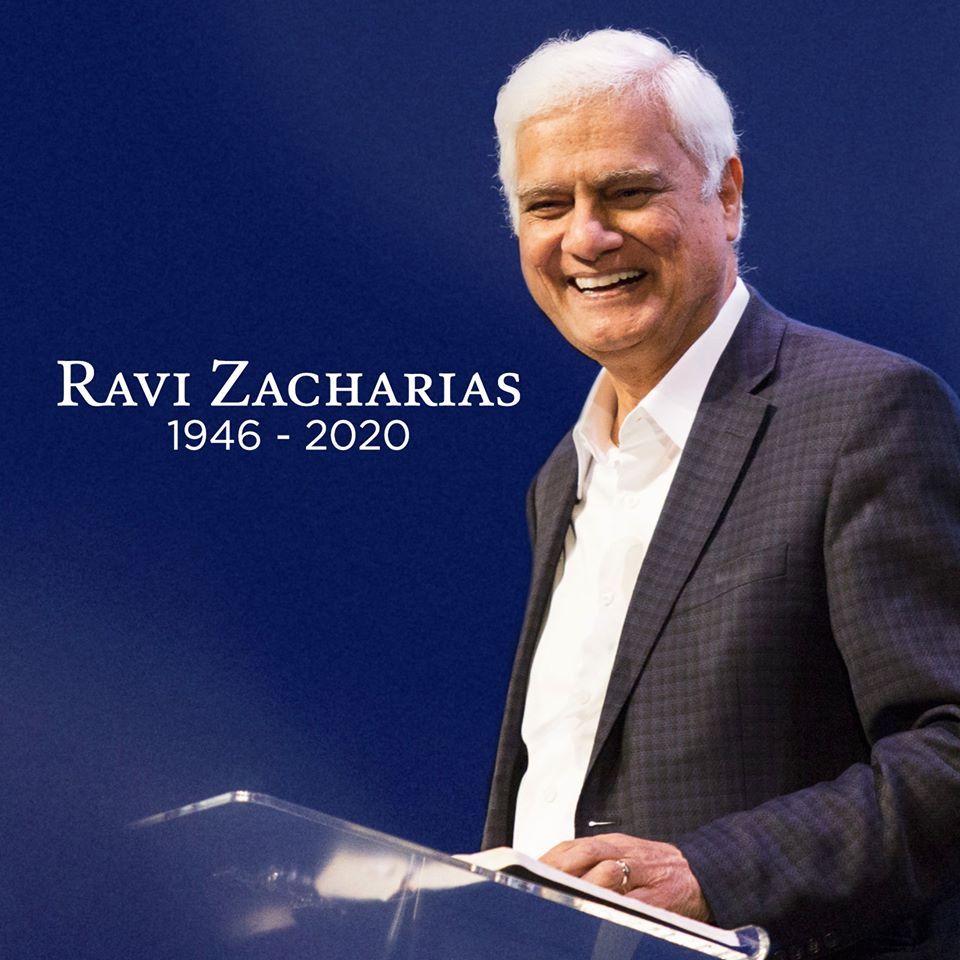 It is always fascinating how exceptional individuals come along in the mix of life with such extraordinary talents and gifts that they change the world because they change individual lives, one at a time.

So it was with Ravi Zacharias who died today, too early at 74.

Perhaps many have never heard of him, but he left a deep mark in the evangelical movement. And he greatly influenced thousands of evangelicals, including me, who determined to defend the Gospel in a secular era publicly.

Ravi was born in India, and as a teenager, feeling that life was meaningless, he attempted to kill himself with poison. As he told the story, he was lying in a hospital bed, and a Christian aide gave him a Bible, pointing to the Gospel of John, Chapter 14. It was verse 14:9 that gripped his imagination. “Because I live,” said Jesus, “you also will live.”

Ravi seized on that promise, believing that, “This may be my only hope: A new way of living. Life as defined by the Author of Life.” He devoted his life to Christ in that bed with the commitment to pursue the Truth, leaving “no stone unturned.”

In 1966, when he was 20 years old, he moved with his family to Canada, finishing college and post-graduate work, and began his ministry traveling across the world. One trip included preaching with Billy Graham in Europe, where he wrote he became aware of the lack of Christian apologetics, or the defense of the faith against objections. This calling on his ministry led to the founding of the Ravi Zacharias International Ministries, first in Canada, and later moving its headquarters to Georgia, with his wife, Margaret, whom he married in 1972, and three children.

With over thirty books, including bestsellers, to his credit, Ravi Zacharias became one of the most articulate, thoughtful, and fearless apologists in the Christian arena, traveling to many of the world’s most prestigious colleges to debate or defend the Christian message of God’s love and hope through Christ.

Following in the path scouted out by C.S. Lewis, C.K. Chesterton, and Francis Schaeffer, and in this century with Norman Geisler, Charles Colson, and Os Guinness, Ravi was a passionate instructor of the need for a purposefully articulated “Christian worldview” that was integrated and coherent. A worldview that challenged and answered secularism and atheism on the ancient questions of man’s purpose, as well as the new issues presented by modern science. He was a brilliant voice on stage, focused, and because of his interactions and understanding of Eastern religions, a winsome defender of the Christian claims.

His famous quote on Truth is still a benchmark. “Truth is not only a matter of offense, in that it makes certain assertions. It is also a matter of defense in that it must be able to make a cogent and sensible response to the counterpoints that are raised.”

Ravi taught countless evangelicals that to be faithful and successful carrying the Gospel into a secular world, Christians must answer four fundamental questions; the origin of life, the meaning of life, and morality and destiny in life. And, he believed and taught that the defense of Christianity came from logic, emotional connection with modernity, and using moral judgments.

He captured this in a well known quote; “Everyone – pantheist, atheist, skeptic, and polytheist – has to answer these questions:’ Where did I come from? How do I define right from wrong, and what happens to me when I die?’ Those are the fulcrum points for our existence.”

In announcing his passing, Ravi’s ministry stated that he “saw the objections and questions of others not as something to be rebuffed, but as a cry of the heart that had to be answered.”

He will be missed as a great and faithful man in an unfaithful era without apology. And, those of us who learned at his figurative feet, take on his task. That is a great legacy.

Ravi Zacharias Without Apology was last modified: May 19th, 2020 by Michael Giere