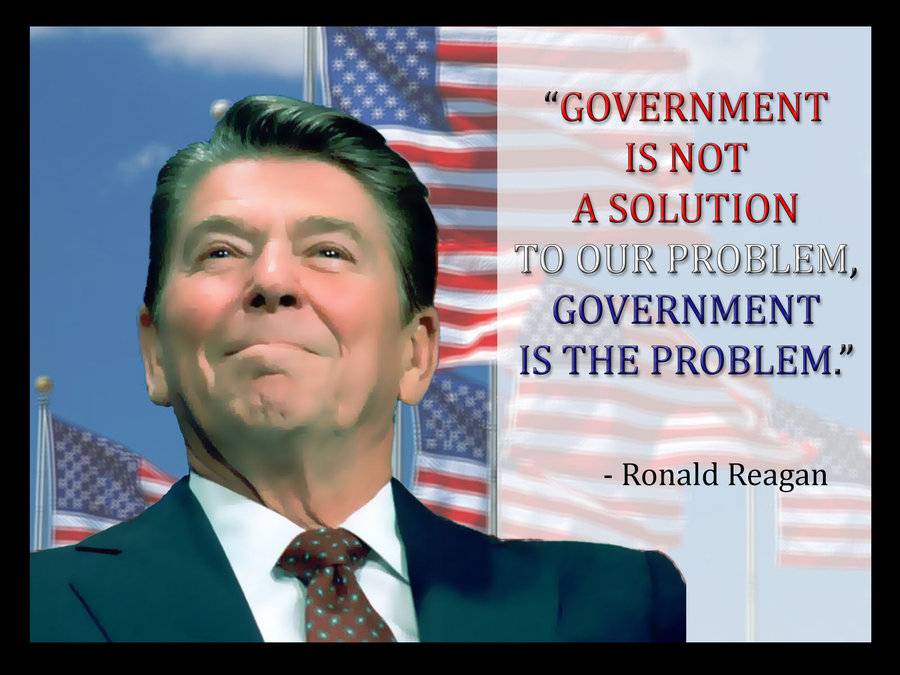 Reagan Redux Part 2: Trump gets the same reactions to early moves on taxes and deregulation

Reagan had James Watt at Interior, who previously led a conservative think tank in Colorado that wanted to undo a number of environmental rules, and Trump has Scott Pruitt, destined for EPA, and charter and religious schools advocate Betsy Devos as Education Secretary.

Putting pro-business anti-regulation people in charge of certain agencies did create some scandal.  A notable one occurred in 1982-83 inside the Environmental Protection Agency where a Reagan appointee, Anne Gorsuch, was held in contempt of Congress for refusing to release documents about whether EPA was not enforcing the new Superfund law.  One EPA political appointee went to jail for lying to Congress and Gorsuch, the mother of Supreme Court nominee Neil Gorsuch, was forced to resign.

In today’s piece, we will focus on the analogy between the Reagan and Trump efforts on domestic policy:

SOCIAL ISSUES:      Reagan’s embrace of the Moral Majority agenda, which opposed abortion and homosexuality, was a prime cause of Leftist outrage, especially in Hollywood and on college campuses.

In recent weeks, we have seen Hollywood and the music industry lash back at Trump at any chance – like the Grammy Awards last week.

But the liberal establishment was fearful of Reagan and the Moral Majority/Phyllis Schalfly/Pat Buchanan influence.  In reaction, lefitist TV producer Norman Lear formed “People for the American Way,” and in March 1982 rounded up a number of Hollywood celebrities to perform in a two-hour CBS show called, “I Love Liberty.”  Its attempt was to showcase the nation’s diversity, which Lear felt was under assault.  He had actors playing gays, the disabled and of course minorities, and the implication was , ‘Hey, these are people, too, and Reagan is ignoring them or sidelining them.’  It was histrionic at best.  Neither this nor the protests did anything to influence the 1982 midterm elections.  The GOP maintained Senate control, though it lost seats in the House.

BUDGET AND TAXES:  Like Trump, Reagan’s policies were protested around the country.  In I covered one such rally in Jersey City’s Liberty State Park in April 1981, shortly after Reagan survived an assassination attempt.

In my article, liberal New Jersey Gov Brendan Byrne denounced the budget cuts and military buildup.  He told the rally:

The Soviets are men like us, with children and hopes for a better ,more secure future.  It is time we recognize the soviets are not 10 feet tall, though it is sometimes convenient for the Pentagon to paint them as such.”

Byrne’s statement reflected a common Carter-era Democratic counter to Reagan at the time and that any cut in social programs was going to be disastrous.

I covered a May 1981 forum where Reagan’s cuts in legal aid were denounced.  Reagan was quoted saying legal aid for civil suits amounted to paying “a bunch of ambulance chasers doing their own thing at the expense of the poor.”  Sounds very Trumpian, no?  But the vitriol by the legal services people were just as polarizing.  One said, “President Johnson’s war on poverty is becoming President Reagan’s war against poor people.”  By the way, Legal Aid is still in existence.

DEREGULATION:  Trump’s deregulation moves have yet to create consternation, except with the pending nomination of Scott Pruitt to head the EPA.  But they will.

Under Reagan, deregulation had its moments, such as the EPA scandal, or when the USDA announced that ketchup would be considered a “vegetable” under school lunch guidelines.

But overall, deregulation had amazing benefits.  Under Attorney General William French Smith, the Justice department settled with AT&T, leading the monopoly to be divided into seven regional holding companies.  The selling of spectrum for cell phones created whole new companies like Cellular One (which later became Cingular Wireless and then was absorbed into AT&T).

Competition also ensued in satellite communications under Reagan’s “separate systems” policy, which was sort of like the AT&T breakup for wireless communications.  It is very possible that had there not been deregulation of AT&T and other monopolies like Comcast cellular service and satellite TV never would have occurred when they did.

I cover the Food & Drug Administration under Reagan and a scandal involving generic drug payola.  It led to a number of convictions and changes in the law, but overall generic drug deregulation under a 1984 Reagan backed law created whole new pharmaceutical companies such as Mylan, Barr and Teva.  Numerous biotechnology companies began due to Reagan-era streamlining of the biologics approval process and better patent protections, notably, Amgen and Genentech.

GAY AND LGBT ISSUES:  Although Trump has said nothing negative about gays and is generally positive about LGBT issues, the liberal intelligentsia chose to demonize him due to the DeVos appointment and the fact conservative Evangelical Christian Mike Pence is his vice president.

But Reagan was accused of being anti-gay, too, particularly his administration’s handling of the AIDS crisis.  Health agencies were accused of dragging their feet and essentially allowing gays to die, but his administration resisted efforts by conservatives to quarantine HIV-positive people. But despite having a Surgeon General, C. Everett Koop, who became popular due to his stress on condom use in sex, and his FDA approved the first AIDS drug, AZT, in less than 100 days, long after leaving office he was accused of letting gays die- notably a Bennetton commercial in the 1990s.

Stay tuned for Part 3 tomorrow: Reagan and Trump, excoriated by the Left, but successful in the outcome

Reagan Redux Part 3: Excoriated by the Left, but Ultimately Successful – The Bull Elephant February 20, 2017 at 12:20 pm

It is really just encouraging that there are more and more individuals that are not only accurately reflecting on the real politics of the Reagan administrations but are taking the time and making the effort to do so accurately and in detail. This is critically important in my opinion not just because the actual political events of the Reagan era have too often faded into a blend of myth, fantasy with a little manipulated fact thrown in to justify many specific modern individuals or group’s positions or policies by employing the Reagan name to support or justify their actions, but also because the Democratic left of today, as well as significant portions of the media, have spent a tremendous amount of effort in building and projecting a totally disingenuous and often outright false perception that the modern Trump Administration and it’s large voting base is some type of unprecedented, unsavory collection of American political deplorables.

What this modern voting coalition really is in truth is nothing nothing more then a re-insurgence of the silent majority base that swept Reagan and his administration’s reforms to political power in the 1980’s. The attempt to isolate the early Trump administration as some ahistorical aberration of the current state of American politics is just plain and simple falsehood and outright manipulation. Indeed the parallels between the two administrations (at least early on through Reagan never enjoyed a Congressional majority at any time during his presidency of 1981-1989) is striking and frankly amazing in both its rise to power and it’s commitment to voter campaign pledges.

What it also clearly shares is the left wing Democratic party’s rabid attempts at destabilization of a duly elected President. The bottom line here for younger voters is that the historical political cant you are being sold by the current Democratic left and it’s media allies is pure and simple unadulterated lies. Older voters fully realize we have been here before in our political history and that the base fear of the political left today, as it was in the 1980’s, is their lies, encouragement of social chaos, national security neglect and failures, as well as, outright economic injustices and discrimination having yet once again caught them out with the American public.

We have in truth a repeated outcome of complete and total rejection by the American public at the electoral ballot box in both eras. We have been given a second chance (a rare occurrence in life) having been able to just barely retreat from political and social consequences far more dire then those we faced in the 1980s. The message in my opinion is this – first the existing political situation isn’t new, we have been through it all before in the 1980’s. Second and more importantly though we need to get it “right” this historical cycle as I’m doubtful there will be a third opportunity and these forces of chaos only retreat they don’t ever really disappear as 1980s should have taught us but apparently didn’t.

Good article Ken. I look forward to reading parts 1 and 2 as well and only hope that President Trump and his administration will be even more eloquent that Reagan and his administration in distinguishing exactly how BIG GOVERNMENT is indeed not only a “problem” in and of itself but also directly influences our individual character as the people of the united States of America and how our lives pre-determine in large part the very fate of our nation. For while our framers once declared that there were indeed certain “self-evident truths” about our “unalienable rights”, they seem very much under great threat today, and cause me to wonder if we will indeed continue to cherish and protect them or try to sublimate them instead in favor of new contrary counterfeit ones created ex nihilo out of some misguided judicial, legislative, executive, or emotional based feeling or opinion. For such “opinion” in itself is often not based on what is truly reasonable in the long run but instead seriously threatens to undermine and ignore those very foundational rights and beliefs that have made us such a great nation in our past, but now sadly are being increasingly used to justify the legal stealing and re-distribution of what one 72 year old grandmother and her ten employees have spent decades building in the State of Washington in order to give what is hers to a gay customer and his ACLU attorneys. This is neither justice nor progress but a travesty of both.

Leave a Reply to Reagan Redux Part 3: Excoriated by the Left, but Ultimately Successful – The Bull Elephant Cancel Reply