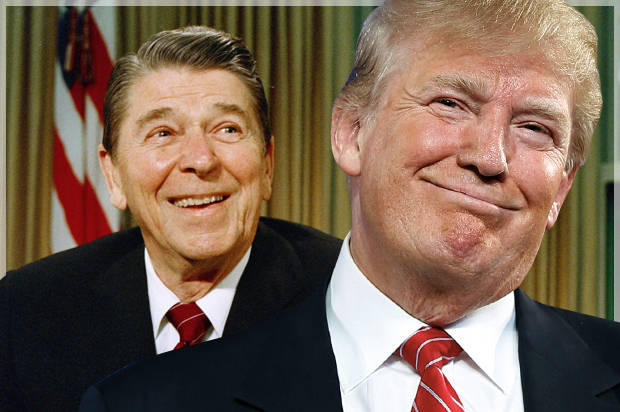 Reagan Redux Part 3: Excoriated by the Left, but Ultimately Successful

FINAL INSTALLMENT OF A THREE-PART SERIES. CLICK HERE FOR PART 1 AND PART 2.

President Ronald Reagan, like President Trump, was accused of creating his own set of truths; media pundits said he was living in a Hollywood world of heroes and villains.

Reagan received tons of criticism in the 1980 campaign for stating that pine trees created more pollution than cars (Pine trees do emit volatile organic carbons, which is a major source of ozone depletion). He also maintained that sulfur dioxide emitted from Mount St. Helens was greater than that emitted by cars over a 10-year period (not so). In 1985, Reagan praised P.W. Botha’s apartheid regime of South Africa for eliminating segregation, a blunder then-Press Secretary Larry Speakes had to correct a few days later.

Like Trump, Reagan – pretty much like most Republican presidents since Nixon — got accused of being proto-fascist and racist.

Despite being pro-Israel, having a number of Jewish appointees and publicly denouncing the Holocaust deniers, Reagan’s decision in 1981 to sell five airborne early warning and control system (AWACS) planes to Saudi Arabia drew outrage from Democrats and pro-Israel groups.

His comments in response to a question from ABC’s Sam Donaldson about whether he thought Martin Luther King was a communist drew outrage. Reagan responded: “I guess we’ll find out in 25 years,” referring to the fact King’s FBI file was sealed for that long. But Reagan signed the law creating the MLK Holiday.

Trump’s senior adviser, Steve Bannon, is being derided as an “Alt.Right,” a “fascist,” and a negative influence on Trump. All presidents have advisers who get demonized. For Reagan, his hardball guy was Pat Buchanan, who is accused of being an anti-Semite to this very day.

The neo-Nazi allegations escalated in the first four months of his second term in 1985 when Buchanan helped arrange for Reagan to join German Chancellor Helmut Kohl to lay a wreath at the Bitburg cemetery, where a number of Nazi SS officers were buried. Again, Jewish groups were up in arms, as were his liberal critics.

Despite all the negatives, Reagan and his people were undaunted and stuck with their conservative disruptor agenda. He won a huge landslide over Walter Mondale in 1984, who carried but Minnesota and DC. The GOP maintained control of the Senate until 1987. His vice president, George H.W. Bush, succeeded him.

Of course, Reagan had his failures, such as huge budget deficits, an irregular policy on Iran and Iraq, a failure to rein in welfare costs, which were only accomplished under Clinton, and of course, immigration across the Southern border. I am sure I can name more.

But if you read Parts I and II of this series, you will see the amazing results of the Reagan presidency. He will be remembered forever for helping bring down the Soviet Empire and liberating some 500 million people, despite the vehement opposition and fearmongering from Democrats. New industries and job creation was stellar. Some 15 million jobs were created under his watch.

Reagan ranks among the nation’s most successful presidents, coming in at number 9 in the C-SPAN’s Historians Survey on Presidential Leadership rankings, ahead of Lyndon Johnson, Woodrow Wilson, and Barack Obama. I believe Trump, if successful, could wind up high on that list, too.

Indeed, Reagan won an electoral landslide and a slim majority of the popular vote in 1980, while Trump lost the popular vote to Hillary Clinton—and big. So, Trump has come into office with a much-less-clearer mandate. Ironically, both used the campaign slogan “Make America Great Again.”

But Reagan never had both houses of Congress under his party’s control, just the U.S. Senate, but there were enough conservative pro-defense Democrats in the House to give him a majority on a number of legislative priorities, including tax and budget cuts.

He had to work through the mainstream media, and did not have the tools Trump has, such as Twitter and Fox News. But like Trump, Reagan and the Republicans frequently lashed out at the liberal media.

Hollywood and the universities were liberal and hotbeds of anti-Reagan activism, like we see today.

The liberal “resistance movement” we see unfolding with a vengeance against Trump is short sighted and will do as much to help to Democrats as the nuclear freeze demonstrations or that rally I covered in Jersey City.

But “Trump derangement syndrome” afflicts all-too-many in the Left, partly because of withdrawal these people are going through without President Obama at the helm.

It is apparent from Reagan that successful presidents are not interested in being popular, but achieving results. They have a well-defined vision and hire the best people to carry it out. They know how to work with legislators of both political parties and can form coalitions to get their agenda adopted.

Trump is unfazed by the resistance movement and the boycotts and temper tantrums being thrown by Democratic leaders in Congress.

We Republicans must not sit back and just needle your liberal friends or never Trumper friends on Facebook. You also have to take to the streets and demonstrate peacefully , write letters and emails to members of Congress and make phone calls. Above all, do what Michele Obama advised: “If they go low, we will go high.”

No doubt, Trump is bringing us on a wild ride. That’s what a disruptor does. But if Trump achieves Reaganesque results, and we see job growth, the demise of Islamofascist extremism and terrorism, better border control, and a market-driven health care system, the nation will be better for it, and so will the world.

President Trump will continue to put America first no matter how the media attacks him, the left and establishment right demonizes him, and no matter how much the Hollywierd crowd whines. I have and will continue to enjoy this wonderful “wild ride” as that Un-American crowd continues to weep and gnash their teeth. The more they flip out, the the more I get to laugh, and most importantly, the more President Trump wins! That means America wins for those of you slow on the uptake.

Mr. Reid – Congratulations on your election to the town council here in November.

Until Trump learns to behave in a civilized and responsible manner, he will continue to earn the brickbats of the left, and the exasperation of many Republicans and Independents. The issue often is not policy, it’s decorum and credibility.

How So?
I give a rats ass about decorum and credibility, gimme results.

What good is a U. S. president (or anybody) who lacks credibility? You must be one of those sycophants who would support Trump, even if he shot someone on Fifth Avenue. Didn’t you find that comment insulting?

Who the hell are you to judge whether the President has credibility or not.

Everyone is free to reach their own conclusion. Including me. You are free to do the same.

We are now in a world of public discoarse.

Is your misspelling of the word discourse a clever pun? If so, bravo. Very apropos.

Yep, I throw those in all the time as I seem to be murdlizing the English language.