Today’s disappointing news on the recount in Virginia’s neck-and-neck Attorney General race not only confirms that Democrat Herring likely widened his lead over Republican Obenshain by a slim margin, but it also (not unexpectedly) confirms that Democrats know how to turn out under-informed and under-prepared voters.

The WaPo is reporting that the Herring campaign has widened its lead to roughly 800 votes as a result of the recount efforts underway yesterday and Monday. (And curse you, Thor’s Hammer, for beating me to the “Publish” button!!)

The Virginia State Board of Elections circulated guidance to all recount officials to show them examples of ballots they should accept and reject. I understand from conversations with recount officials today that these types of examples were common among the under votes. Below are some of the types of markings that were accepted: 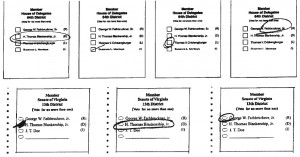 So, for all you Obenshain voters (and Cuccinelli, Jackson, and Dudenhefer voters, too), rest easy knowing your votes have been canceled out by people whose minds are not as sharp as the marking pens they so embarrassingly mis-used.

The full State Board of Elections guidance on what ballots to accept and which to reject can be found below.