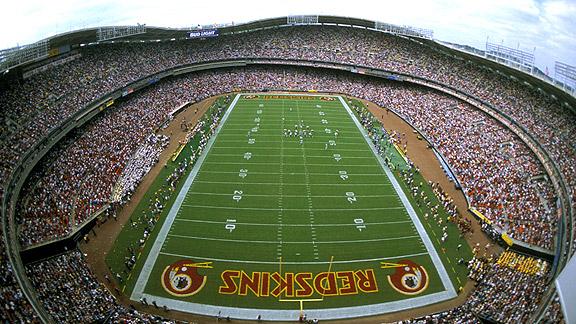 Redskins To Build a New Stadium

Washington Redskins owner Dan Snyder is meeting with architectural firms to begin planning for a new stadium for the Redskins. The team currently plays at the 17 year old FedEx field in Landover Maryland. The new stadium could be in Maryland, Virginia or DC, but Snyder would like it have the feel of the old RFK stadium and possibly be at that site.[read_more]

We’ve already seen some preliminary drawings and I’m going to be very retro with it,” he told CSN. “It’s gonna feel like RFK. It’s gonna move like RFK. I love that, I actually asked architectural firms to do it and they said that they can do it. I said that I think the lower bowl sections are going to want to rock the stadium like the old days.”

It has also been reported that a new Redskins’ stadium at the RFK site might be a domed stadium because Snyder is hoping to lure a Super Bowl to Washington,

“It ought to be here, it would be a fantastic accomplishment,” he said. “It’s the biggest sporting event in the globe. It’s the nation’s capital, it’s a no-brainer.”

Some fans think Dan Snyder is the ‘no-brainer’ in the Redskins organization but he is the owner of the third most valuable team in the NFL, currently valued at $1.7 Billion.