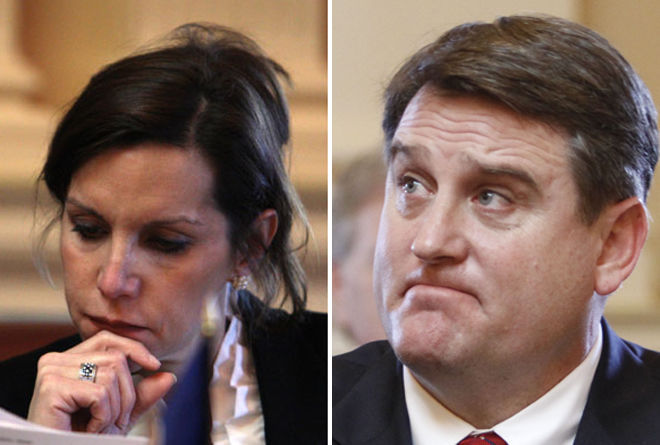 Reeves and Vogel will face off in court before the primary

Candidate for Lt. Governor state Senator Bryce Reeves has accused his opponent state Senator Jill Vogel of setting up a fake email account to send messages to Reeves’ supporters accusing him of having an affair. The emails came from Jill Vogel’s husband’s cell phone and their home IP address. Reeves has strenuously denied the accusations contained in the emails.

When Senator Vogel refused to turn over her electronics to an independent, third party, investigator, Senator Reeves filed a defamation lawsuit in Stafford County with subpoenas issued for Senator Vogel and her husband.   The Vogels have filed a motion to quash the subpoenas.  That hearing will be held June 9th, just days before the primary.

Also running for Lt. Governor is Delegate Glenn Davis who represents the 84th district in the House of Delegates.

Reeves and Vogel will face off in court before the primary was last modified: May 23rd, 2017 by Jeanine Martin

I’m curious what religion Jill Holtzman Vogel affiliates with. I can’t find a specific reference on the web about her religion — but her bios note that she received her bachelor’s degree from William and Mary in ‘government and religion.’ And she received her law degree from DePaul University (which I think is nominally Catholic).

Holtzman-Vogel should apologize and leave Virginia courts out of this election dispute.

It is good Reeves is moving forward, however, if only to remove one more of the false defenses (“Reeves isn’t pursuing this in court”) offered by sycophants.

How DARE Revees fight back?! He should be the gentleman and ROLL over and let Vogel say whatever she wants!

Right?! No. “The dog ate my homework” = my internet was hacked = BULLCRAP = Vogel’s lame excuse.

I would just about guarantee Vogel asks for a continuance.

That doesn’t mean it will be granted.

No, but if her online bio is correct, she can just write Reeves a check. Poof gone, like never happened!

Are all the candidates lawyers who kiss the power company ass?

No, Jill got her money the old fashion way, she inherited it. Holtzman Propane.

What ever happened in court?

Stewart takes no money from Dominion!

So who’s the dems running?

Three way primary. No one knows who the nominee will be

Three candidates with no experience in office. Justin Fairfax is probably the most likely to win.