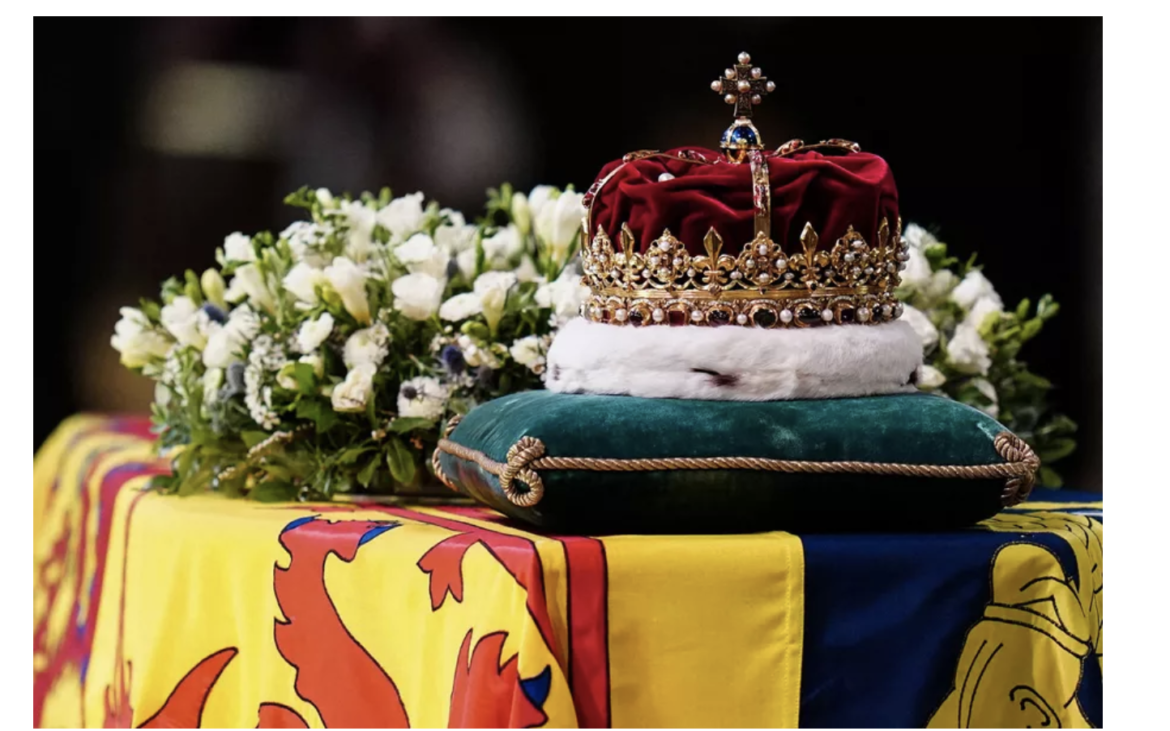 Her Majesty the Queen.  Elizabeth II, longest reigning monarch in British history, passed from this earthly life on September 8, 2022, at the age of 96.

Around the time of her passing, a double rainbow hung in the sky nearby Buckingham Palace.  Solemn commemorations followed in England, Scotland, Ireland and Wales testifying to Queen Elizabeth’s extraordinary life from her unexpected ascension to the throne in 1952 until her passing.  Seventy years in service to God, Country, the Commonwealth and Realms, and to her family spanned times of war and peace, upheaval and change.  Such is the history of humankind.

Amidst the calm and tumult of Queen Elizabeth’s 70-year reign, she represented a particular constancy, an enduring steadiness as she navigated historical animosities in search of greater understanding and cooperation.  Tributes extolled her warmth, dignity, compassion, love of family, depth of knowledge, intellectual curiosity, understanding of both history and current affairs, and focused devotion to her duty as Queen ordained by Almighty God. It is perhaps this last attribute that is so unique, that she would accept her Divinely ordained duty with humility in service to the people of the Commonwealth.

Elizabeth II concluded her Coronation Oath by declaring, “The things which I have here before promised, I will perform and keep.  So help me God.”  Clearly, she meant it.

The President of the United States, by tradition rather than Constitutional requirement, concludes his Oath of Office with these words: “So help me God.”  Who actually means it?

How many of our politicians here in America assume their elected positions with humility in service to the Republic and the people of their District or State? Or have a depth of historical knowledge, intellectual curiosity, or keen hindsight and foresight to guide their constituents toward a brighter day?

In his homily for the late Queen at her funeral in Westminster Abbey, Archbishop of Canterbury Justin Welby observed wisely: “People of loving service are rare in any walk of life.  Leaders of loving service are still rarer.  But in all cases those who serve will be loved and remembered when those who cling to power and privileges are long forgotten.”

At the Queen’s memorial service at St. Anne’s Cathedral in Belfast, Archbishop of the Church of Ireland John McDowell spoke of her work at reconciliation.  He noted that reconciliation is both a great New Testament word and a great civic word.  It speaks to the restoration of broken relationships, which the Queen pursued as a professed follower of Jesus Christ.

Describing the work of Queen Elizabeth II, Archbishop McDowell counseled, “Love listens far more than she speaks.  So a few words in an unfamiliar tongue and a judicious sentence or two of heartfelt regret and wisdom, said far more than ceaseless volubility. …. Although love is easily injured, she keeps no record of wrongs and extends the open hand of sincerity and friendship, with courage, to create an environment and an atmosphere where reconciliation has a chance.”  Again, her demeanor and actions attested to her solid Christian faith.

We live in an era of instant self-promotion through social media. Each day brings fresh opportunities for clever memes.  It is increasingly difficult to separate fact from fiction. What of our rantings and ravings will survive to be recognized and celebrated 70 years hence?  What deserves to be remembered and celebrated?  What are Duty and Honor and Service and Faith?

I reflected upon these questions as I watched the commemorations honoring the late Queen.  There was an overarching solemn dignity and reverence to the atmosphere, whether in the double rainbow outside Buckingham Palace, or in crowds lining streets and outside residences, or inside magnificent churches or parliaments where political rancor still exists.  It was a time of solemn and peaceful reflection, the likes of which we probably will never witness again for such a world leader.

That calm commemoration stood in such stark contrast to the current upheaval here in America.  The very foundation of our Constitutional order is shaking.  Historic statues are defaced or toppled. History is re-written.  Law and order become more and more capricious.  The Administrative State usurps Congressional prerogatives, often with no consequences.  Our southern border is open to drug smugglers, human traffickers and terrorists.  The President refers to his political opponents as threats “to the very foundations of our Republic,” further enflaming divisions sowed by sinister provocateurs.

We are in dark times over here across the Pond.  No question.  Our current condition may be answering Benjamin Franklin’s admonition when asked what he and the Founders had given the nascent country: “A Republic, if you can keep it.”  Can we keep it?

What will it take to restore civil society and rediscover the blessings of our Constitutional Republic?  Perhaps we start with a dedication to Service, Duty, Honor, and Country.  And Faith.

CT, beautiful and true reflections. The physical beauty of our nation is being whittled away – yet our greatest threat is that the notions of sacrifice, valor, courage, duty and honor are being destroyed from the inside out. The America people are on their own. Their government, schools and “ruling class” has complexly abandoned any notion of service and duty. Of simple goodness. That is not a partisan issue – it is true of both parties. Where are our leaders? What of our future? Like all history, sadly, it will be written after a great struggle.

Well as John Cleese points out, England is not really a British country anymore. Last week there was a massive street brawl between second generation immigrants from Pakistan and second generation immigrants from India in Leicester…with a few recently immigrated thrown in. So much for the British melting pot. The queen is about as relevant to the actual populations as Confederate statues are to the burgeoning Latino populations of Richmond. Both can go and then the new residents can elect their own queen, or put up statues of Poncho Villa on Monument Ave.