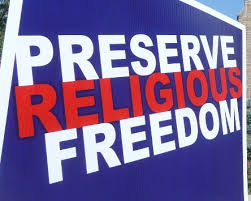 â€œHard choices,â€ writes Roberts, â€œarise when people of faith exercise religion in ways that may seem to conflict with the new right to same-sex marriage.â€ People who, â€œas a matter of conscience, cannot accept gay marriage,â€ as Justice Roberts describes them, are not merely facing hard choices; they are now in conflict with the United States government.

The â€œhard choicesâ€ now pit the power and resources of the federal, state and even local governments against individuals, churches, businesses, nonprofit organizations, colleges, home schoolers, and all legally recognized — and regulated — human endeavors that communicate and act in ways consistent with the religious and ancient tenet that marriage is exclusively between one man and one woman.

To enforce this new right, there will be government investigations by a vast array of alphabet-soup named agencies — EEOC, DHS, DOJ, FTC, FCC, DOL, HUD, IRS, etc. — against believers in traditional marriage. It will be an assault on First Amendment rights of conscience, of course, but compounded and made possible by the erosion of the Fourth Amendment, which was written to protect our security against unreasonable searches and seizures by government.

Religious conservatives who think the Fourth Amendment applies only to police will learn otherwise. Government bureaucrats with power to search and seize literature, private records, private emails, notes of sermons, and donor and membership lists using judge-less â€œadministrative subpoenasâ€ will disrupt and bully practices of faith.

Bureaucrats are unaccountable to the electoral process. They are mostly untrained in, or often disdainful of, the Bill of Rights. They will use costly administrative investigations to impose unreasonable interpretations of their power over religious conservatives. The Declaration of Independence refers to this as “sen[ding] hither swarms of officers to harass our people.”

What many religious conservatives may not know is that the Fourth Amendment exists in large part because of abuse of religious freedom.

The Fourth Amendment is brief but complex, and reads as follows:

In Professor William Cuddihyâ€™s treatise, The Fourth Amendment: Origins and Original Meaning 602 â€“ 1791, he explains how abusive investigations against religious freedom in 16th century England â€œawakened the movement for a right against unreasonable search and seizure.â€ Professor Cuddihy explains: â€œThe most vigorous, far-reaching searches before 1642 aimed at persons and books that criticized the Crown or the established church . . . and evolved into a system that regulated many aspects of political as well as religious life.â€ (Emphasis added.)

In 1550, the Privy Council (advisors to the Crown, or what in America might be the White House Cabinet) directed searches at Oxford University to confiscate Catholic publications. A 1588 proclamation â€œinstructed all public officers â€˜that they should with all care and diligence, in all places . . . inquire and search for all . . . [Catholic] bulls (patents and charters) . . . libels, books . . . and pamphlets,â€™ and for the disseminators of them as well,â€ Cuddihy explains with meticulous citation to historic sources.

Resistance to these abusive searches occurred. Jesuit priests and nuns were holed up in walls and hiding places during searches, and were constantly on the run. Printing presses were moved from town to town so that religious literature could keep being printed.

The focus of abusive religious investigations was turned when the Catholic Queen Mary took the throne. Cambridge University was investigated for Protestant literature. Searches were also directed at the anonymous author and religious dissenter, Martin Marprelate.

It is unquestionable that protection of religious liberty was a major factor in the eventual adoption of the Fourth Amendment.

Through judicial decisions, acts of Congress, and shear abuses of the rule of law by the executive branch and administrative agencies, the Fourth Amendmentâ€™s protection of our security have been severely eroded over the past 80-plus years. As noted above, the Fourth Amendment is complex, and what religious conservatives need to know to protect their rights is too long for purposes of this article.

The first thing that religious conservatives may do, however, is work to eliminate administrative subpoenas, which are issued unilaterally by bureaucrat agencies without approval of neutral judges, and without the requirement of â€œprobable causeâ€ required by the Fourth Amendment.

A proposed state constitutional amendment introduced by two conservatives in Virginia would eliminate judge-less administrative subpoenas. Thatâ€™s a start. In the mean time, proponents of traditional marriage need to get busy learning why the Fourth Amendment is essential to protecting religious liberty and our other First Amendment rights to speak, publish and assemble peaceably.

Wheeeee! This slippery slope is fun!

Maybe these guys should find a religion that doesn’t insist they be bigots.