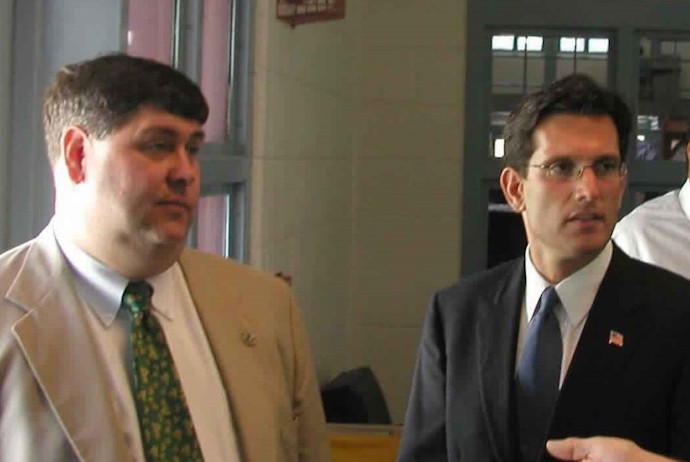 (Apologies for the long post…skip the background if you’re familiar already).

In 2014, Dave Brat’s campaign to defeat then-Majority Leader Eric Cantor for the GOP nomination was universally regarded as a long shot effort.  What began the turnaround in perceptions—where Brat’s idealistic grassroots supporters got the first inkling of what lay ahead—came at the Henrico GOP Mass Meeting.

At that meeting, key Cantor loyalists had planned to “slate” Henrico’s district convention delegation to suppress all dissenting viewpoints.  Grassroots organizers anticipated this, and turned out more votes in a successful bid to stop the effort.  This gained a small but significant amount of coverage in conservative media as evidence of Cantor’s vulnerability in his own back yard.

Next came the 7th District Convention, where Cantor’s right hand party man, 7th District GOP Chairman Linwood Cobb, was facing a challenge from a political unknown, Fred Gruber, who was almost literally dragged into the contest by Brat’s supporters.  While Cantor’s folks might have been caught off guard at the Henrico Mass Meeting, they were fully mobilized for the district convention.  The result?  Cobb lost by 4 points, a seismic event in Virginia politics—and a sign of things to come.  Pols and politicos not just from around Virginia, but around the country, began to take notice of the trouble brewing for Cantor when his money and power couldn’t preserve his grip on the local party in his own district.

A great deal more of that money and power subsequently came to bear in the Cantor’s primary race.  Cantor’s chief consultant, Ray Allen, characteristically went for overkill.  In an attempt to crush the upstart challenger with truckloads of negative mailers and non-stop negative radio and TV ads (both of which undoubtedly made Allen a small fortune), Allen instead drove up Dave Brat’s overall name identification and drove down Eric Cantor’s positives.  Solidifying his moniker of “Worst Consultant Ever,” Allen’s handiwork could be seen in the results of the primary, where ironically those voters outside the Richmond media market (i.e., beyond Ray Allen’s aerial bombardment) were the ones most supportive of Cantor.

Brat’s victory shocked the political world, as we all know.  Since then, with the widely held (but mistaken) belief that the Cantor/Brat race was all about immigration, Cantor’s allies on Capitol Hill killed comprehensive immigration reform.  Brat’s victory in the General Election then helped energize conservatives in the House, many of whom coalesced into the Freedom Caucus.  Eventually, and with the help of several other intervening factors of course, this led to the resignation of Speaker John Boehner, and Majority Whip Kevin McCarthy stepping aside for the job that was to be Eric Cantor’s.

The Empire Strikes Back

Since their June 2014 embarrassment, the Empire has been plotting its revenge against Dave Brat’s Rebel Alliance, and have been dropping hints about the vast resources and support they will unleash against the usurpers in 2016.  A new organization called the Virginia Conservative Network was established to counter some of the enthusiasm of the kind of people supporting Dave Brat around the state, and to channel resources and coordinate efforts on behalf of like-minded personnel.  As we previously reported:

[O]ne of the workshop sessions [at VCN’s inaugural event] was entitled, “Reclaiming the Elephant.” There is a lot of meaning packed into that title, but just on the surface there is an implication that something that is rightfully theirs has been taken, and needs to be seized back. We’re sure a lot of this came with window dressing about tending to the Republican brand, etc., but underneath it all, the thing being reclaimed is simply power for its own sake. If it was truly about messaging and electoral temperament, how can one fault (and conspicuously exclude) a man who won a landslide campaigning–quite literally–on the Virginia Republican Creed?

But now we know a nomination fight is indeed going to happen.  This week, we’ve gotten confirmation of the earlier reports that Henrico Sheriff Mike Wade is going to lead the “establishment” charge.  According to the Times-Dispatch, Wade confirms he is running against Dave Brat, and signaled that he will make this announcement prior to this Saturday’s 7th District GOP Committee meeting.

Sheriff Wade, according to sources who have spoken to The Bull Elephant on the condition they remain anonymous, is being backed by a host of familiar longtime Cantor allies, including prominent consultants, lobbyists, and past and present GOP officials.  We’ve also been told a certain talented young insider will likely be named as Sheriff Wade’s campaign manager; this person declined comment when asked to confirm.

Return of The Jedi

(OK…I’ll stop with the Star Wars references).  Brat’s supporters know the counterpunch is coming, and are motivated, organized, and prepared to work even harder than they did in 2014.

Tuesday night, at a meeting of the Henrico Tea Party, it was announced to raucous applause from the roughly 75 attendees that Goochland GOP Chairman Ben Slone would be running to take the place of Fred Gruber as 7th District Chairman when Gruber steps down at the end of his term this spring.  Slone is a popular figure respected on both sides of the convention/primary divide, and will be tough to beat.

No candidate has yet announced an intention to run against Slone, though we are told Cantor’s allies have attempted to recruit the very impressive former Henrico County Commonwealth’s Attorney candidate Tony Pham, who has apparently declined to take up the challenge.  Tony is a great asset for the GOP, and I hope he is keeping his powder dry for a future run for public office. 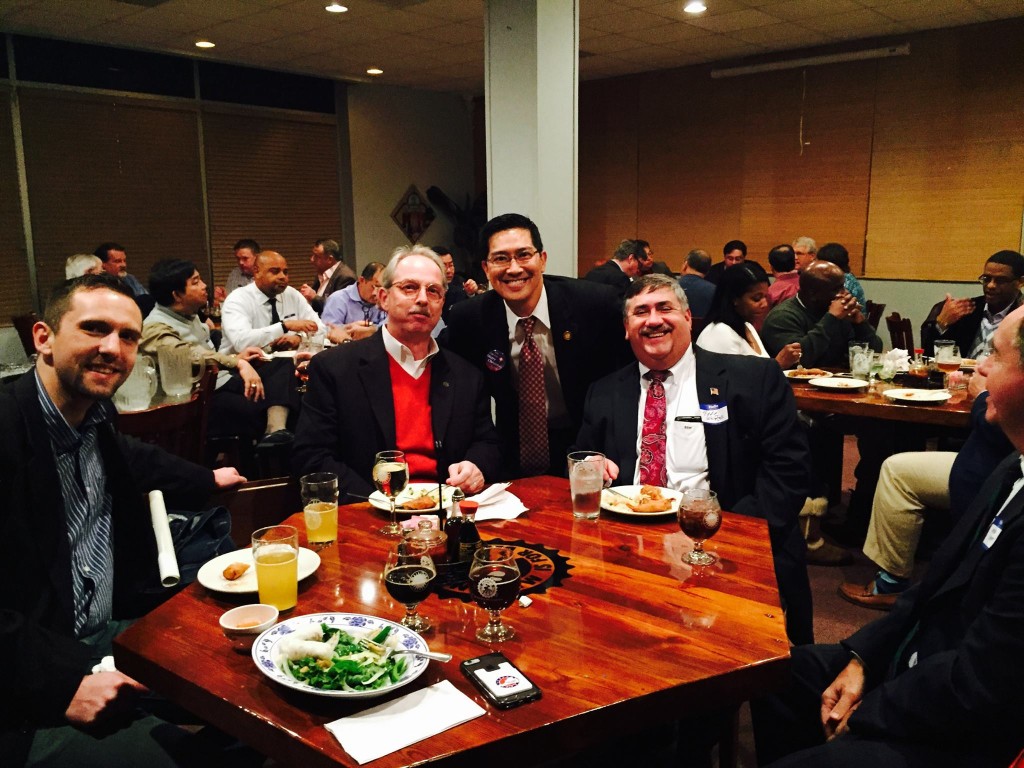 Also featured at Tuesday night’s Henrico Tea Party meeting was conservative activist leader Russ Moulton, who figured largely in the 2014 intra-party contests in the 7th District.  At one point during a talk meant to get the assembled activists excited for the upcoming contests, Moulton apparently asked for all those who were endorsing Dave Brat to stand up.  Almost everyone stood up, including Senator-elect Siobhan Dunnavant (R-Henrico) and Del. John O’Bannon (R-Richmond).  Only one person in the room remained seated: Del. Jimmie Massie (R-Richmond).

As mentioned above, the 7th District Republican Committee is holding a meeting this Saturday, January 9.  The chief item of business will be for the committee to select the method by which the nominee for the 7th District Congressional seat will be chosen.

Rep. Brat has indicated his preference is to be nominated by a party-run convention, to be held concurrently with the convention the 7th District is already required to hold to elect its chairman, representatives to the State Central Committee, national convention delegates, and presidential elector.  However, unlike with members of the General Assembly, the Incumbent Protection Act does not give members of Congress complete authority to determine their own method of renomination.  The code reads, in relevant part, as follows:

Thus, if Brat wanted a primary, he could force one, but the law does not allow him to force a convention (even if he wanted to).

Brat opponents/Cantor loyalists still make up at least a bare majority of the 7th District Committee, however (there have been no regular intraparty elections since the June 2014 primary).  Consequently, many on the committee do not want to give Brat what he’s asked for.  Instead, the plan for the “establishment” folks is to force a party-run canvass, which they believe will allow them to (a) appear to be compromising between a primary and a convention; and (b) still maximize the money advantage they believe their candidate will enjoy over Rep. Brat.

If you’re in the 7th District and want to come show your support for Rep. Brat (or, for that matter, Sheriff Wade), the District Committee meeting will be at the Henrico Government Center on Saturday, and will start at 4:30 PM.