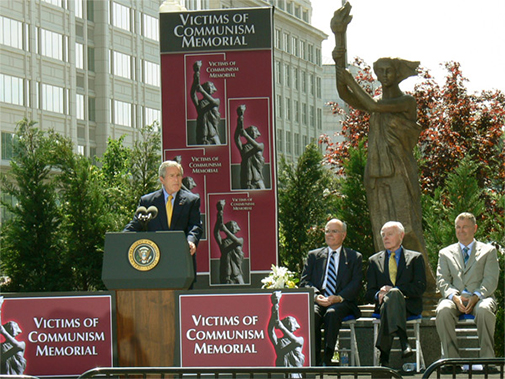 Remembering the victims of communism and Tiananmen Square

Socialism may be making a comeback, but freedom and democracy will defeat the idealistic collectivists

Both Churchill and George Santayana said basically the same thing about 40 years apart –that if you fail to learn from history (the past) you are destined to repeat it.

This week in 1989, Chinese students engaged in protests seeking democratic reforms in Beijing’s   Tiananmen Square. Their protest was crushed by People’s Liberation Army tanks and soldiers, even though five months forward, the Berlin Wall would begin to fall and a number of Soviet satellites in Eastern Europe.

Sadly, our youth over the last 30 or 40 years has been spoon-fed sanitized concepts about socialism and Big Government by public education and higher ed, so a number of young people have no memory of these scenes nor the harsh reality of communism.

And how many among us know that there is monument in DC, fashioned after the papier mache Statue of Liberty the Chinese students made in June 1989, to memorialize the 100 million who died under various communist regimes in the 20th Century?

There is.  It’s the Victims of Communism memorial  at the corner of Massachusetts and New Jersey Avenues NW in Washington, DC.  If you have not seen it, it is well worth visiting; the result of 15 years of effort and fundraising.

President George W. Bush and a number of members of Congress spoke at the June 12, 2007, dedication – that day picked because it marked the 20th anniversary of Ronald Reagan’s “tear down this wall” speech before the Brandenberg Gate in Berlin.

“We have an obligation to future generations to record the crimes of the 20th century so they will not be repeated.  Freedom is precious and cannot be taken for granted.  Evil is real and given the chance, men hardened by unspeakable ideologies till take the lives of millions to retain power.”:

He also noted the monument chosen for the memorial was not a replication of the Berlin Wall, or the GULAGs, or the horrible symbols of communist oppression.  Instead, it was the Lady Liberty statue designed much like what the Chinese students erected in Tiananmen Square 30 years ago. “A symbol of hope,” he said.

A number of members of Congress who helped guide the project spoke, but none was more heartfelt and passionate than the late Rep. Tom Lantos (D-CA), the only Holocaust survivor to date to serve in Congress.

Lantos, who died the following February, survived Hitler’s camps as a Jewish teen in Hungary and briefly lived under Hungarian communism before emigrating to the U.S.  He and his wife, Annette, were Jews saved by Swedish diplomat Raoul Wallenberg, himself captured by Soviet agents and kept in prison till his death.

In his thick Hungarian accent, Lantos said the U.S. is an “a -historical society,” perhaps a reference to how we forget history.

His speech was prophetic, stating “the upcoming generation barely knows what communism is.  It was considered the Wave of the Future, the Future belonged to them, and it took a handful of powerful political leaders in this country and elsewhere [of all political parties] to recognize the difference between free and open societies and communist tyranny.”

Lantos said it was “it was my privilege to fight against Nazism and communism and now against Islamic terrorism, which is determined to take us back 13 centuries.” He later attacked then Iranian dictator Mahmoud Ahmadinejad and the Taliban, referring to both as “Islamic fascism.”

The speech nearly made me cry as it is sad there are no Democrats like this in national office anymore.   Watch the entire dedication on YouTube

The sad part of the Tiananmen Square protests is that the George HW Bush Administration and other Western Nations failed to counter Premier Li Peng’s sending in the tanks to crush the revolt, as China was open for business!  This Wall Street Journal opinion piece tells of the West’s failure to stand up to the “Butchers of Beijing”

Bill Clinton, who defeated Bush for re-election in 1992, had the gall at the 1992 Democratic Convention to say Bush 41 had coddled “dictators from Baghdad to Beijing,” but once in office in 1993, with the promise of millions in Chinese donations to help his re-election and the DNC, and sucked in by the globalist lobbyist, Clinton sold super computers to China and made the fatal decision in 2000 to allow China “most favored nation status” in trade – essentially, throwing some 5 million Americans out of manufacturing jobs.

China has married communism with state-run capitalism.  Some 1 million Uighur Muslims in Western China are being uprooted and sent to re-education camps, and none of the Islamists on the Left have uttered a word, nor has the Trump administration and big business.

As a result, we are dependent on China for a lot and it remains to be seen whether President Trump’s tariff war can force Beijing to give in.

Going back to Tom Lantos.  He noted that the 1956 Hungarian uprising, like the 1989 Tiananmen Square protests, did not result in democracy.  “It had no chance of success,” Lantos said of the Hungarian revolt. “It was not a failure but delayed victory.”

We all hope the people of China, North Korea, Vietnam, Cuba and the few other remaining communist nations will taste that victory some day soon.  We also can hope that Americans will not succumb to Democratic Socialism which is still socialism by a nicer sounding name.