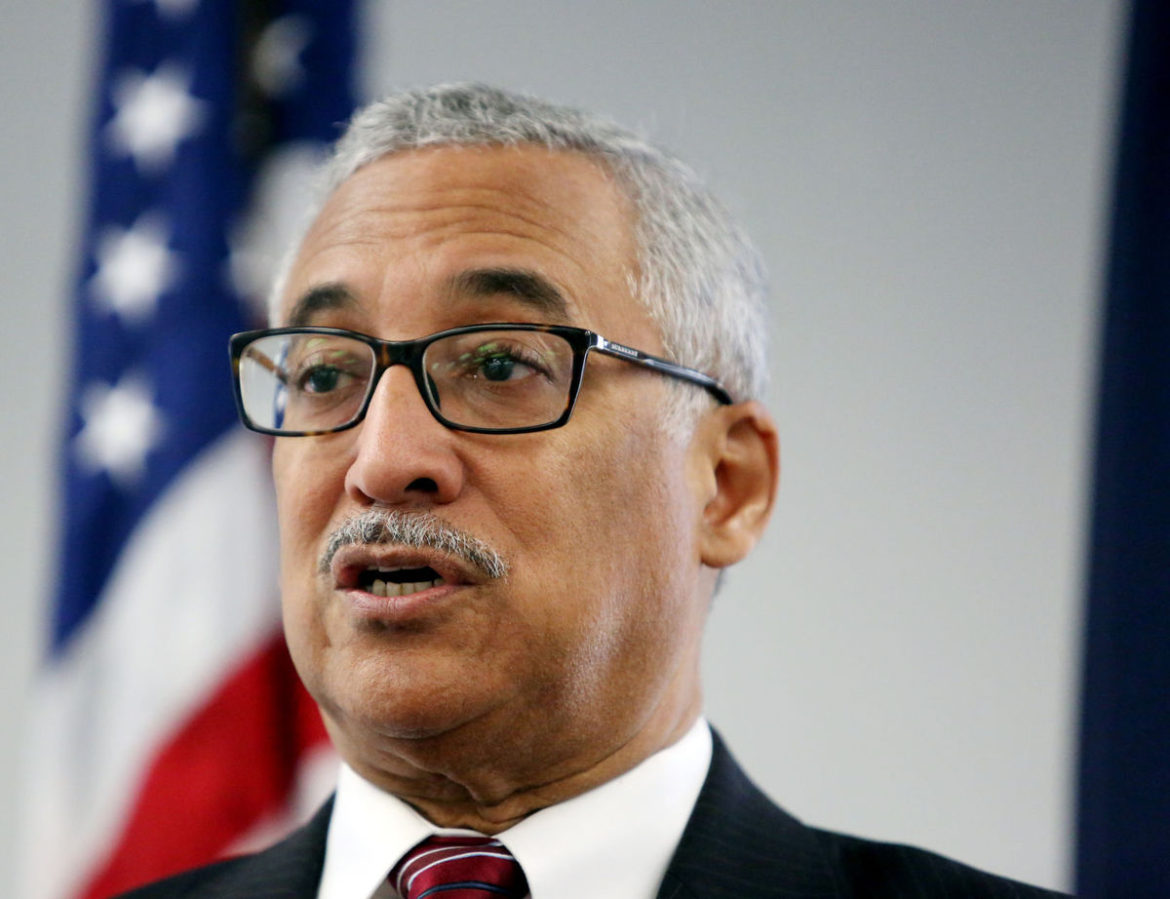 M. Reese Everson, speaking at a press conference in Arlington, claimed that when she rejected the congressman’s advances, she was fired and blackballed from finding other work as a congressional aide. She said she eventually fell into destitution.

Scott in a statement denied any wrongdoing and called the allegation “false.” He claimed Everson was working with a Republican known for peddling conspiracies.

“I absolutely deny this allegation of misconduct,” he said in the statement issued shortly after Everson’s press conference. “I have never sexually harassed anyone in my 25 years of service in the United States Congress, or in my 40 years of public service, or at any other time.”

Today, a former Congressional Black Caucus Foundation fellow, backed by a Republican operative known for dabbling in outlandish conspiracy theories, falsely alleged an act of sexual harassment against me. I absolutely deny this allegation of misconduct. I have never sexually harassed anyone in my 25 years of service in the United States Congress, or in my 40 years of public service, or at any other time. Sexual harassment and assault are serious issues deserving of critical attention and review. No one should be subjected to sexual harassment or be treated unfairly. I have fought to promote and ensure that in my political and professional life and I live by it personally. The recent national discussion about sexual harassment is valued and important to our work to continue to make the workplace free from harassment and discrimination. False allegations will squander this momentous opportunity for dialogue on meaningful change in the workplace. I am confident that this false allegation will be seen for what it is when the facts are adequately reviewed.”

Very odd. Law enforcement with many years in his district, tell a story that he swings from the other side.

Could it be both ways?

1.raising public awareness of how extensive this problem,
2.warning people to watch what they say and do (sorry, you can call it ‘political correctness’ and hate it, or you can realize that people SHOULD be treated fairly, respectfully, and properly under the law and under morality), and
3.reforming many institutions, businesses, agencies, services, etc that very much needed to be reformed

I agree it’s a good thing but not for any of your 3 reasons. I think this moral panic is a good thing because it exposes leftism for what it is, and the more that happens, the better. It’s delightful to watch leftists go absolutely crazy eating their own. It is best enjoyed with tea and crumpets. Just when I think the left can’t get anymore insane they outdo themselves lol. I’m waiting for leftists to propose a “man tax”, whereby all men are required to pay 10% more in taxes because of the ills they cause in society lol.

Don’t feed them any crazy ideas. Look at what is happening in Sweden because the feminazis rule the place. Stupidity abounds.

Oh it’s happened here in the United States before …

Unsurprisingly, New Jersey, Michigan, and California were among the places that tried to do it … some things never change. Society has zero sympathy for single men with money in their pocket lol (or men in general as far as it goes)

Men are the engines of productivity in a society.

I’m curious what you meant by this, you mean low birth rates ? That’s happening here too! Birth rates hit an all time low again this year in the United States.

I attribute it to … well .. I’ll let Mr. Frank Harper from 1902 say it. He expressed his frustration with women who constantly asked him why he wasn’t married and he suggested this response – “Madam, that query can best be answered by your own sex”.

Sweden is inviting invasion in the name of compassion. In its attempt to be a humanitarian superpower, it is willfully destroying itself. And, who is in power throughout Sweden, radical liberal women.

I did not cause any “ills on society”.
I wholeheartedly deny those unfounded allegations.
This is clearly an attack on my white privilege. That is the same privilege everyone else has; to get thier lazy butts out of the warm covers and head out to work in the cold and be thankful that the wind in not blowing gusty today.
If there were a man tax today the projections would fall short, a man does his job.
1)Where is the wall?
2)Why hasn’t DACA ended?
3)When are all the illegals going home?
4)When are they going to “make sure everyone is using the HB program properly “?

Man is defined by the ability to keep his word.
Word not kept on these four campaign promises, not to “manly”.

W,
Please correct me if I am wrong.
1)DACA could end with an Executive Order issued by the POTUS just as it was initiated.
2) Funding allocation would come from our Republican Majority in the House and Senate.
(Although Mexico is supposed to “pay for it”)
3) Nor have I seen any change in policy by the POTUS to make employers compliant with HB regulations.

Please remember I was the very 1st and loudest Trump supporter on TBE.
I personally feel the blame of others does not warrant a free pass on accountability. I do not cast a vote for my candidates and turn away to let them have no accountability no matter who they are or think they are.
Campaign Trump was tougher than President Trump on illegal immigration.
Not an exhibition Americanism to be seen as of yet.
The blame game does not carry any weight with me.
I think we hired a Contractor to do the scope of work he had proposed and he has yet to deliver.
Contract will soon be null and voided.

The tax plan is good for me. It is not complete reform if it does not address payroll fraud.
The tax plan will have minimal benefits to my employees compared to fixing payroll fraud.
My employees are smart enough to understand the tax plan will not give them job security or allow their wages to increase within a illegal workforce for that there will have to be a minimum wage mandate.
I suspect we are witnesses to the Art of the Deal in reverse. We are only getting about 10% promised of scope of work to be done.
Yes when my employees bend over to work they have to fear being sexually assaulted by our Representatives not doing their jobs.

After the obamacare debacle, Trump doesn’t want to hand any ammunition to the Democrats until he has an actual accomplishment. I am willing to give him more time as the Republican Congress has been delinquent on its promises.

I do understand you counter argument but….
If you give the Republicans the candy (tax breaks) Why would they deliver on anything else, they never have before.
The careless Party gave us Obamacare.
The could care less Party well they could care less.

In the words of Megan Kelly the night Obama beat MCain;
“grab your tax cut and get out of town”

There’s more than one way to drain the swamp. Pretty soon there won’t be any Congress critters left.

This is what happens when guilt by accusation takes hold. I don’t like Scott politics but look at what is happening. This woman was fired and now sees a payday opportunity. If Scott paid off or pays off for convenience, then he is toast.