Congressman Rigell is showing little respect this week to the hardworking grassroots in his district with his latest decision to continue his support of a fundraiser for Virginia Beach Mayor Will Sessoms this Friday that will feature Democrat Governor McAuliffe as the “Special Guest” for the evening.

It is difficult to understand why Rigell would want to stick his neck out for the Virginia Beach mayor or be associated with any fundraising event that involves Mr. Medicaid Expansion himself, Governor McAuliffe, but after speaking with Rigell’s office today that is exactly where it stands.

Sessoms is considered by many Republicans to be a habitual turncoat in the Virginia Beach Republican Party.  Although the position of mayor in Virginia Beach is officially a nonpartisan office, as Rigell’s office repeatedly pointed out, Sessoms represents himself as a Republican and has been a member of the VA Beach Republican Committee when he is not getting thrown out for supporting Democrats. Ironically, Sessoms supported Jody Wagner over Bill Bolling for lieutenant governor; Warner over Gilmore for U.S. Senate; Northam over Jackson for lieutenant governor; and McAuliffe over Cuccinelli for governor.  Sessoms has repeatedly advocated for tax increases, bigger budgets and more debt as mayor. He was also part of the slating cabal that unsuccessfully attempted to disenfranchise over 900 delegates to the Second District Republican Convention. 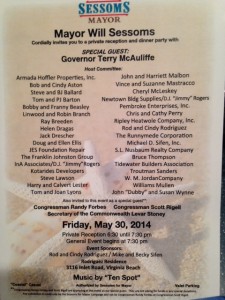 What is more disturbing is the continued support of this event after Rigell’s office learned that Governor McAuliffe would be the headliner. Both Rigell and Congressman Randy Forbes were listed as “special invited guests.” You can’t blame someone for being listed as invited, as Rigell’s office was quick to point out. The problem becomes the response once you find that your name has been associated with something you do not support.

Congressman Forbes’ office responded quickly with a statement distancing themselves from the event and expressing a clear desire that they not be associated with it:

Rigell’s office dismissed any controversy around the invitation and expressed no desire to distance the Congressman from the event. His staff simply said that Rigell is the only Virginia congressman who continuously votes for the conservative Republican Study Committee budget in the House, and that stance should speak volumes.

The problem is that our Virginia Republicans are embroiled in a bitter battle with McAuliffe over Medicaid expansion. McAuliffe made Medicaid expansion one of his top priorities during his campaign and Sessoms was quick to jump on that train and help McAuliffe during his campaign. Now we have the Sessom/McAuliffe fundraiser, in the midst of the Medicaid Expansion standoff, and Rigell, unlike Rep. Randy Forbes, is unwilling to disassociate himself from the event. The grassroots have fought hard to elect Cuccinelli, oppose Medicaid Expansion, and grow the Republican Party. Suffice it to say, many grassroots Republicans in the 2nd District are not happy.

Waverly Woods, a Republican and Chairwoman of the Hampton Roads Tea Party, held nothing back in her response to the situation:

Words are hard to find when describing this flyer. To think any “Red Blooded Conservative ” would support Mayor Sessoms after all he has done to destroy the Republican Party by supporting one Democrat after another. To call Mayor Sessoms anything less than a turncoat is just being too polite. Who in their right mind (friend or not) would want to risk political suicide with such a toxic Mayor? I think the Republican Party has been through enough. The taxpayers sure have!