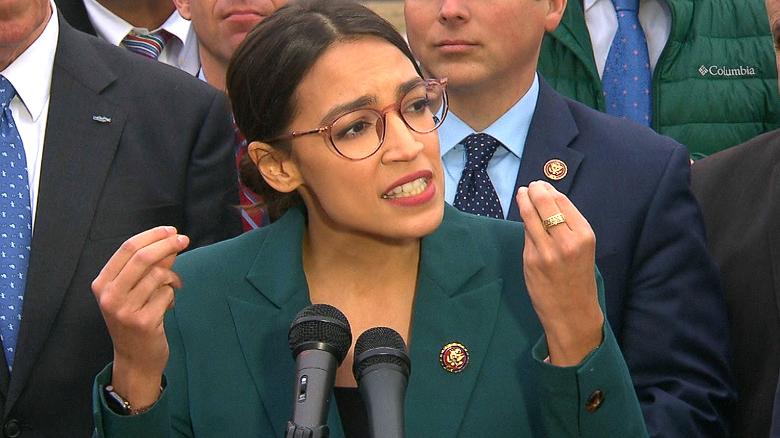 Repealing the laws of physics

One of the more famous or infamous stories of politics involved a meeting at which the science and engineering community met with a number of newly minted Democrat legislators and their assistants.  The meeting started off with a Democrat assistant proposing a series of new “imaginative” ideas. Suddenly, a scientist who had enough of the gibberish shouted out “That defies the laws of physics”. The reply of the Democrat presenter was a classic, “Well, if it is a law, then we will just repeal it”.  (And that pretty much describes what the current crop of Democrat socialists knows about things scientific.)

The new darling of the left, Congresswoman Alexandria Ocasio-Cortez, has proposed a number of truly interesting green initiatives among which are the elimination of air travel. News reports state that she plans to replace airplanes with trains.  While it is known that trains can travel on, over and through land, their ability to travel across the seas is somewhat in doubt. See 1935 Labor Day hurricane, rogue waves, seaquakes, and tsunamis.

To make things truly significant on a personal level, AOC has proposed to reconfigure every structure in America with energy saving and ecological measures in mind.  However, I think she needs to use her economics degree to figure out how many tens or even hundreds of trillions of dollars this would take. Yes, I suspect many, many trillions and who knows who would actually do all of the work.  Jimmy Carter’s Habitat for Humanity only has so many helpers and the world only has so many people.

Possibly the most interesting part of AOC’s Green proposal is the elimination of carbon-based fuels.  This would not only eliminate oil, gas, and coal but wood and straw as well. If she were to achieve such a significant goal, the human race would be quickly propelled back into the stone age – and that assumes that the human race could still exist.  Of course, that may be the eco-socialist agenda, save the planet by eliminating humans from the planet.

It is hard to imagine that anybody with a brain would vote for ideas like these.  However, if the recent congressional election demonstrates anything, it is that rabid emotions can overwhelm facts, reason and self-interest.  Taking it one step further, the socialist promise of freebies and welfare for all even promises to repeal the laws of physics (and all the other hard sciences).  The problem is that physics, like individual liberty, is a stubborn thing.

Steven Hawking is quoted as saying “While physics and mathematics may tell us how the universe began, they are not much use in predicting human behavior because there are far too many equations to solve.  I’m no better than anyone else at understanding what makes people tick, particularly women”. I suggest to the now deceased Steven that he eliminate “particularly women” and substitute “particularly uneducated. thoughtless and/or lazy people”.