Reports of Cuccinelli Campaign Demise Have Been Greatly Exaggerated 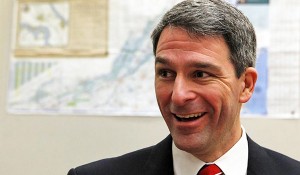 The Look of a Winner

Another day, another poll. But this one has people finally awakening to the electoral fundamentals in the race to become Virginia’s next governor. Despite what some chicken littles and doom mongers would have you believe, Ken Cuccinelli is still very much alive. In fact, he’s going to win.

How is this possible? Despite the lack of a cohesive messaging from the campaign, and despite the relentlessly negative news, the fundamentals in Virginia still favor the Republican this year.

This is being borne out by the latest poll figures, which show considerable tightening in the gap between Cuccinelli and his sleazy death investor rival, Terry McAuliffe. The results from Quinnipiac College’s poll were published earlier today, and show McAuliffe with only a 4 point edge, down from last week’s 7 point lead. (Great discussion by Norm on this here). This poll, in contrast to most others, incorporates attitudes among the people most likely to vote next week to get a sampling that includes more self-identified Republicans than Democrats. Most other polling has been done using models heavily influenced by the 2012 turnout model favoring Democrats by a wide margin.

This is not unexpected. In fact, I expect other polls–even those clinging to turnout models inapplicable to the Virginia electorate this year–will also tighten in the coming days. [UPDATE: Another new poll today shows the race tightening, as expected. Rasmussen shows a 10 point shift in the race in Ken Cuccinelli’s favor.]

Three weeks ago I wrote a post called Why Ken Cuccinelli Will Win, outlining the major reasons why the polling hadn’t then caught up with where the electorate is likely to be come November 5.  The points are as follow, but check out the earlier post for more in-depth discussion.

I recognize this is still a close race, and that Ken might lose.  But I also recognize that the Virginia GOP is a much more vibrant and committed organization than its counterpart.  I also know we’ve had an unprecedented ground game this year in terms of making personal contact with potential voters, while the Democrats are largely relying on work done in previous campaigns.  Do I know 100% how this is going to turn out?

No.  But, my money is on Ken Cuccinelli.