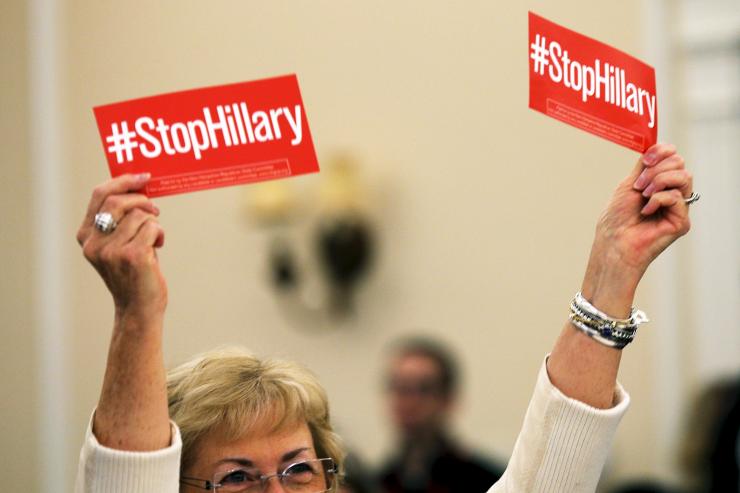 Republican Chances to Take the White House in 2016

Based on polling data available, 2016 is going to be a tough year for Republicans.

In the last two presidential elections, Barack Obama was able to easily crush John McCain and Mitt Romney. The Republicans have done well in the off years, but we haven’t won the Presidential Election since sitting President George Bush was challenged by a fairly weak John Kerry in 2004. Prior to that, we lost the popular vote in 2000 to Gore and only secured the presidency based on the vote of Supreme Court Justice Sandra Day O’Conner. And before that, you’d have to go back to 1988 when George HW Bush won the presidency immediately following his stint as Vice President for two terms with Reagan.

The demographics in this country have changed in the last few decades, to the point where Republicans just have a hard time winning with the Presidential electorate. Maybe we’re past the tipping point where too many voters are dependent on the Government for sustenance and therefore continue to vote for more and bigger government through the Democratic Party. The only chance the GOP seems to have is to actually grow that Big Tent we always hear about. We can’t just depend on people over 65 and Whites to win. We need to go after constituencies we’ve never fought for before. And we need to nominate a Republican who can win over not just the GOP base but also independents and disaffected democrats.

Looking at the electoral map, Republicans are at a disadvantage at this point. No matter who we nominate, we can count on winning 191 electoral votes just by the candidate having an R after their name. These guaranteed states are: AK, AZ, UT, ID, MT, WY, ND, SD, NE, KS, OK, TX, LA, AR, MO, MS, AL, GA, SC, TN, KY, IN and WV. But in order to win the candidate must win 79 more electoral votes in the Battle Ground States.

It’s fairly early in the Presidential nominating cycle at this point, but there is already a plethora of polling data available. Below I have come up with an infographic to visually show how each potential Republican Nominee would do in the general election versus Hilary Clinton in these battle ground states.

There is not data available for all the candidates and some states have more polling data than others. But essentially I’ve taken the average margin versus Hillary of each Republican expected to run and compiled the data together to see who stands the best chance in the general election. No matter who the candidate it is, this polling data tells us it’s going to be an uphill battle.

A few notes about Methodology:

Looking at the data above can be a little bit overwhelming, but I think the easiest way to analyze it is to look at what states each candidate needs to win in order to break 270 and also looking at their respective chances in each of those states.

I think the wisest way to see which candidate can win is to look at the very last state they need to win to break over 270, or the marginal state needed for victory. So this would assume that they were able to win every state where their chances are higher than this 270-breaking state.

Marco Rubio emerges as the one most likely to win. By winning NC and PA, where his chances are 38% each, he amasses 274 total delegates and becomes the next President. This 38% chance is the equivalent of saying if Rubio is able to win every state where he polls within 2.4% of Hillary Clinton, then he’ll win.

This data is summarized graphically below: 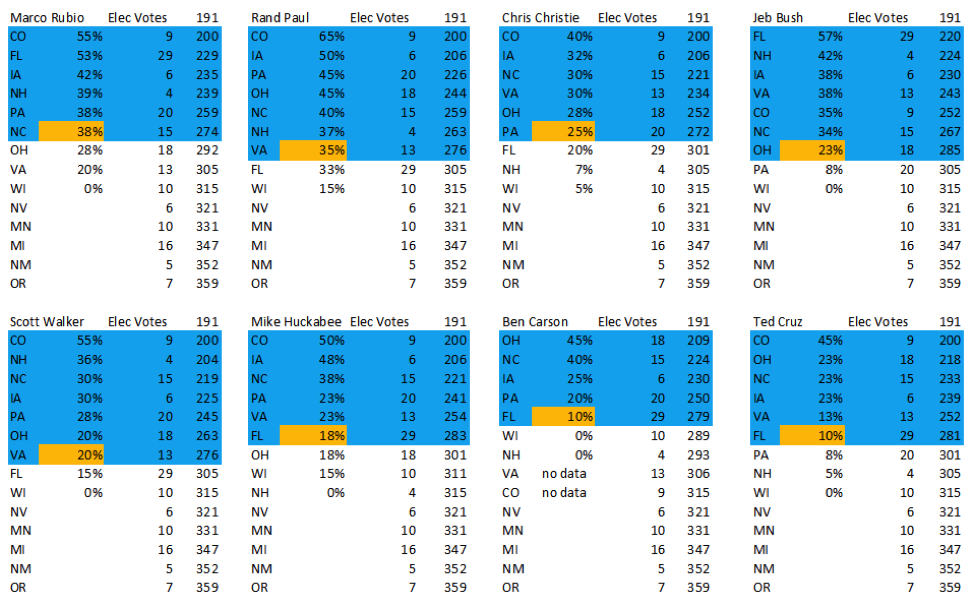 In conclusion, if the Republicans want to win the presidency in 2016, they need to unite around a candidate who is most able to beat Hillary Clinton. Right now that candidate is either Marco Rubio or Rand Paul.

It’s time for GOP voters to unite behind the electable candidates. The John McCain’s and Mitt Romney’s of this world are not good enough. I’m sick and tired of losing in November. Let’s unite and do what’s necessary to win.

Nick Bukowski is a happily married millennial with 3 young daughters, residing in Front Royal, VA. He became a Republican activist during the 2008 presidential cycle and even more so during 2012. He dabbles in political commentary and has a passion for pouring over polling data. He considers himself part of the liberty movement in Virginia and is determined to not just elect Republicans but elect good Republicans who actually follow the Republican creed. And hold them accountable when they don't.