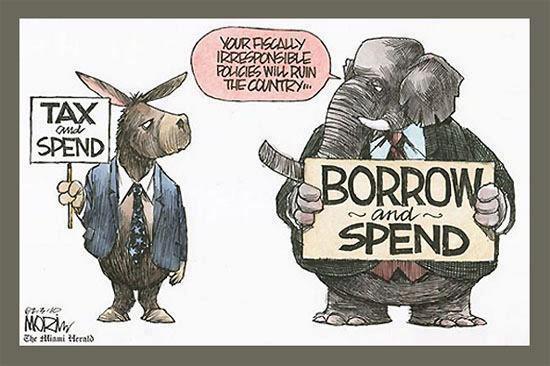 The Republican Party Sucks: Fine…Then DO Something About It

That doesn’t mean we ought to hand Hillary Clinton the White House. No… No. No it doesn’t. Even my libertarian, constitutionalist, and conservative brethren – you too. We don’t hand Hillary Clinton the White House. We don’t do that regardless how terrible the Republican Nominee might be. We don’t help elect our own death blow. All the anti-Trump folks complain about what a liar he is – take heart, he is a liar. All those ridiculous and stupid things he’s claimed he’ll do will never happen. Why? Because he doesn’t really intend to do them. I’m not sure he intends to do anything in particular.

I’m not preaching party unity or the party line. Things are bad and they need to change, but there are ways of changing things that simply do not involve Hillary Clinton in the Oval Office.

For the last three years I’ve written to libertarians, constitutionalists, and conservatives; maybe I should amend that to include establishment types who have finally discovered that when you unharness the federal government from the Constitution, anything is possible. Half the stuff Trump has said he’ll do is actually possible. If that scares you, then you need to get some Constitution in your life. Join us – the malcontented Contrarian Republican base. All these establishment types are scared to death of Donald Trump because they realize their leaders have destroyed the document which would protect us from such strong and intractable personalities.

I encourage everyone who opposes the likes of Hillary Clinton to join their local and state Republican Party in order to build a more libertarian, constitutional, and conservative opposition to the Democrats and their leftist agenda. Yes, that means supporting awful nominees. It means voting for Barbara Comstock because she’s the most conservative person you can elect in the 10th District. It means when things go all screwy and you nominate Mitt Romney, John McCain, or Donald Trump, you still vote Republican. I means supporting the nominees after the real battles (The Primaries) are resolved.

If Rand Paul or Ted Cruz had won the nomination, there would still be a #NeverPaul or a #NeverCruz movement. The establishment would not have stood for it. It’s the libertarians, constitutionalists, and conservatives fueling the establishments #NeverTrump movement. They are milking us. They want us to help elect Hillary Clinton so that they can nominate an establishment candidate of their choice in 2020. That’s the truth. Don’t get played. Don’t serve the people you’ve been fighting against for years.

I’ll take no pleasure in voting for Donald Trump, but we can primary him in four years. In fact, if he doesn’t get us into more wars and debt, then you can bet the Establishment will primary him with as establishment a candidate as they can find in 4 years. Probably Paul Ryan. Conservatives better be ready to counter with a candidate of their own.

Everything has changed. The civil war within the Republican Party has reached the top. Everything and anything is possible. Don’t overreact. Prepare. Take the party back. But if you think that means that you can force all the establishment types out of the Republican Party and still win, you’re wrong. You can’t can’t run off all the GOP’s money and expect to win. You can’t scream, “The Republicans are ruled by the wealthy elite” and then complain when the wealthy elite stop donating to the Republican Party. If you think that means being able to control the party with money while marginalizing “the base”, then you are wrong. If you think this Big Tent survives without us all working and compromising together, you are simply wrong. So wrong.

The Republican Party Sucks: Fine…Then DO Something About It was last modified: June 7th, 2016 by Steven Brodie Tucker

Mr. Tucker, can you provide one concrete piece of informaton that indicates Donald Trump won’t behave EXACTLY as Hillary Clinton would in the Oval Office? Anything that he’s ever done? Ever?

If you can’t, you’re basically asking me to vote for Hillary in a man’s suit, relabeled as a Republican.

I agree wholeheartedly. Especially the part about working to support your favored candidate/policy/platform BEFORE the nominations are a fait accompli. Now is the time to support our nominee and win the election, and stop fighting the battle that is already behind us.