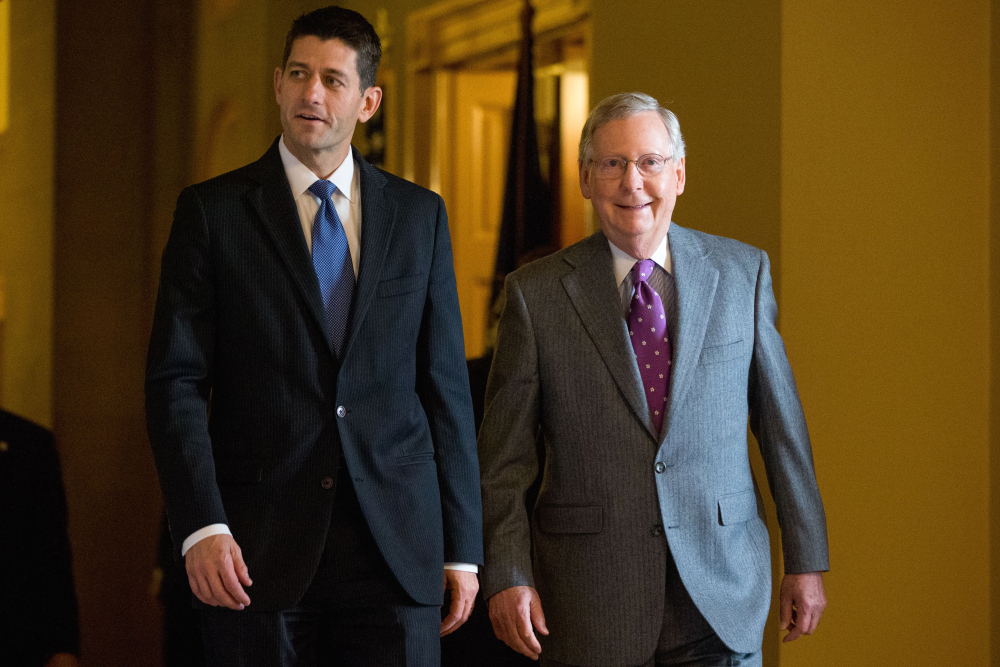 Yeah, I know there are a few exceptions, but those exceptions are rarer than photos of Miley Cyrus in clothes.

We have the Speaker of the House, the Majority Leader in the Senate and other outraged so-called leaders of the Party who are having absolute meltdowns about a clumsy tongue-lashing Donald Trump offered to a judge overseeing an ongoing class action lawsuit over Trump University, a real estate investing seminar program that has since ceased operation.

These Republicans have never attacked Democrats like this. Ever.

Let’s stipulate that Trump went a definition too far. And what he did say obscured the larger point he was trying to make; the judge in question is a member of several La Raza affiliates. Not the Hispanic Legal Association, or the Mexican-American Bar Association, mind you – but La Raza. It means “The Race.” For those of us who have followed the organization, and by extension its affiliates, we know them to be ultra-radical leftists, obsessed with tribalism and themselves the “very definition of racist,” as Speaker Ryan fumed – at the wrong target.

Trump should have stuck with that.

However, let’s take a gander at our feckless, virtually worthless Republican leadership and their minions and see how they have reacted to the actual people trying to “transform” and destroy the U.S – the radical Democrats.

Let’s start with the racist president. Barack Obama wrote two very boring books about his very unaccomplished life up to that point; and in those books he expressly and directly attacks “white” people, their greed, and their inherent racism. Reading the books, you come away with the feeling he simply doesn’t like white folks much. This is amplified by his 20 year association with one of the most virulent racists in the country, the Rev. Jeremiah Wright, not to mention Obama’s mentorship by radical communist, racist and pornographer, Frank Marshall Davis, and his close association with American communists in the Weather Underground. (Did I forget to mention the fact that we still have zero – zero – knowledge of his days at Columbia U, where not one person has ever come forward that knew him there; nor have we ever seen his sealed Harvard records nor his musings? And there is so much more.)

Have you ever heard one of our so-called leaders mention any of this; did McCain, Romney? Nope. They acted like teenaged girls at their first pool party.

Obama has rampaged through the Constitution, flagrantly violated the law, promoted discord and racism, set fire to the Middle East, left men to die in a hell-hole far away, knowingly imported illegals and circumvented the law by executive action, and the list goes on and on. Where is the level of outrage from our Republicans over any of this? Do they use the power of the purse, do they defend themselves, do they attack and educate the public. Do they do anything?

Yes; they give him more money, they cower and bootlick. It’s all they know how to do.

Republicans never fight back. We’re labeled killers, racists, virtually every day. (Who can forget Nancy Pelosi’s despicable accusations, out and out lies and fabrications? Silence from the Republicans. Or the truly evil remarks by Harry Reid? Nothing from Republicans. Crickets.)

Republican officialdom has so little self-respect and, one must assume, interest, that they seem now to actually revel in taking a beating. I’m sure there is a psychological name for that.

I’ll never forget Hurricane Andrew; I was part of the first Bush Administration officials to get on the ground and I learned how useless most Republican politicians were, first hand. I was stunned as day after day all I heard in the media, driven by the Democrats, was about how Republicans had a callous disregard about the massive catastrophe; we let people die; we were unprepared; Bush didn’t care. It was the most vile, blatant lie; and yet the Republicans never responded. Instead, Bush’s son doubled down on Katrina a decade later.

That’s what Republican’s do.

So count me in Trump’s corner on this. I don’t give a hoot. “Call me anything you want; but be prepared to fight if you do.”  I like it. I’m glad to see the attacks. Keep ‘em coming I say.

I’m an ‘ol Reagan conservative (with real credentials and a pedigree going back four decades, unlike most the so-called conservative critics of Trump), and The Donald was not my first choice; but now I’ll stand on these barricades with him all day long. He is now the leader.

It is a hill worth dying on; because it’s the last battle my friends. There is no next time.