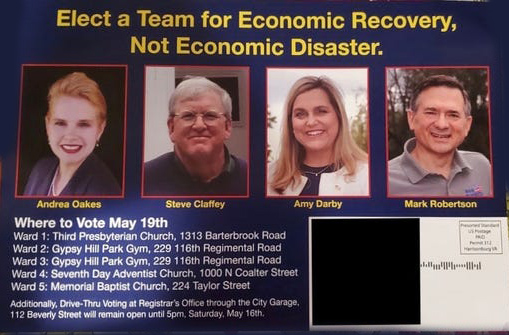 Republicans win big in May 19 municipal elections in Virginia

Ignored by the mainstream media was the fact that Republican-endorsed candidates won some key local elections May 19 in what are supposed to be non-partisan town and city elections, but which are often hedged by both political parties.

And, a number of these winners are non-white and female.

â€œAcross Virginia, Republicans flipped Democrat seats and outperformed all expectations  â€œThe contrast between President Trumpâ€™s leadership and Governor Northamâ€™s god-complex filtered down and made the difference in local elections. National movements start at the grassroots, and proud Virginia Republicans are ready to carry this momentum into November!â€

He gave no specifics, but here are some examples:

But the biggest upset of the night was in Staunton where three conservative challengers and one incumbent swept the City Council races.

The GOP wins were discussed at length on the blog Blue Virginia,

â€œThe conservative slates â€¦ran as a unit and highlighted the Second Amendment as a key issue in their campaigns. For background,  click here:

â€œBottom line is that the strategies worked, flipping both from D to R, but the change in Staunton is stunning almost beyond words.

â€œA city that voted for Barack Obama, twice, voted for Hillary Clinton, voted for Terry McAuliffe and Ralph Northam, even gave a solid majority to Jennifer Lewis in her 2018 congressional run against [U.S. Rep] Ben Cline, is now controlled by Republicans.â€

The writer adds:  â€œI talked to a high-ranking Virginia Democratic elected official this morning, and the personâ€™s thought was that the Staunton results *could be* a â€œcanary in the coal mineâ€ here in Virginia, not so much this November, but quite possibly in November 2021.â€

We can only hope.  Democrats have done their utmost to retain power by scrapping photo ID at the polls, allowing ex-felons to vote, allowing illegal aliens to get driverâ€™s licenses and requiring no reasons to get an absentee ballot.  They also would like all-mail-in voting.

Gov. Northam attempted to move all the town and city elections from May 5 to November, ostensibly to obviate folks having to come to the polls and risk getting coronavirus, but in reality it was a ploy to drown any potential Republican candidates for municipal races in what could be another anti-Trump â€œBlue wave.â€

But the bill died in the April 21 special session and so elections were held May 19.  In Loudoun County, the Supreme Court granted Lovettsville, Middleburg and Purcellville the option to hold them June 16, which is beyond Northamâ€™s June 10 stay-at-home order.  I expect there will be successful GOP candidates in these town races.

As often is the case in Virginia, Republicans tend to do well with low turnout and the coronavirus pandemic led to low turnout in many communities, though Staunton reported turnout comparable to gubernatorial races.

The challenge for Republicans is being more competitive in November elections and turn anti-Trump suburbanites to vote for GOP local and state candidates.  Outreach is a major focus of my campaign to serve on the RPV State Central Committee (3d district) www.KenReid.org

The other challenge is for the GOP to do more to help local candidates, which I have lamented since my time serving in local elected office in Leesburg (2006 to 2017).

In contrast, the Democrats in recent years have recruited candidates and marshaled resources for them — as evidenced by how the DNC and liberal groups pumped millions into Virginiaâ€™s 2019 General Assembly, Commonwealthâ€™s Attorney and county supervisor races.  There are several groups that offer fundraising help â€“ Act Blue â€“ and training, notably the National Democratic Training Committee (NDTC) https://traindemocrats.org/ and Runforsomething.org.

Conservatives count on the Leadership Institute (LI) in Arlington VA and now American Majority to provide campaign training for conservative municipal candidates.  LI is the pre-eminent training group but it has an old-line model with limited distance learning and fees for its courses.

In contrast, NDTCâ€™s free webinars draw as many as 400 candidates online at a time.

I hope the RNC and RPV will not just celebrate the victories of municipal candidates in news releases, but help them succeed in office and help re-elect them with money, manpower and mentoring.  Mayors and councilmembers are tomorrowâ€™s General Assembly members and members of Congress.

To see results from the May 19 Virginia elections, click here.

Republicans win big in May 19 municipal elections in Virginia was last modified: May 25th, 2020 by Guest Contributor Ken Reid