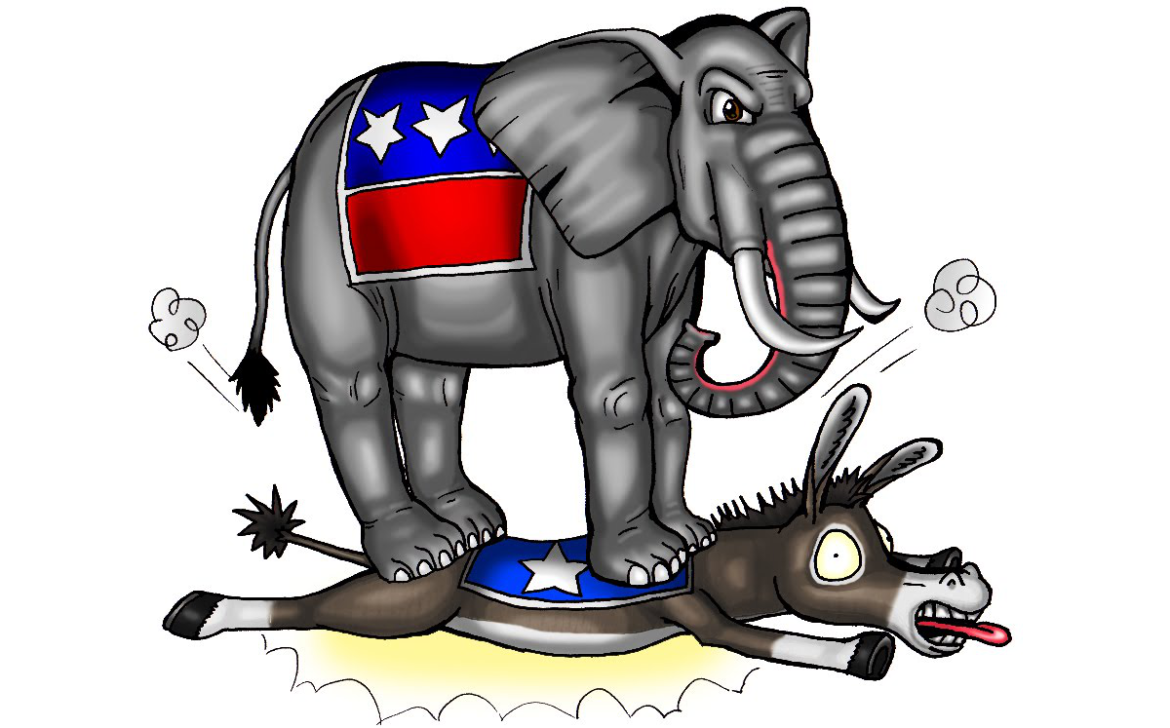 Republicans Winning is the Point

Several days ago I was scrolling through Facebook when I stumbled upon a highly animated discussion about whether or not Barbara Comstock should be contested with a primary opponent.  This was after she voted for the Defense Department’s funding of transsexual surgery, or something to that effect.  A subject I’m sure is front and center on every Republican’s mind.  Nothing says combat readiness like a platoon of gender confused soldiers.

As I was reading various responses, I came upon this little gem from Brian Schoeneman.  I have written in several other articles about my interest in Root Cause Analysis.  This quote encapsulates the main problem (root cause) between Republican Establishment (GOP-e) and Conservatives (GOP-c) members.

“Brian W. Schoeneman I’m not confused in my thinking at all – Rs winning is the point of the Republican Party.  How those folks govern is up to them, not the party.  The party’s primary role is to get our candidates elected.  You want to play ideological patty cakes, that’s fine, but that’s not the party’s job.”

First, let me say that I consider Brian a friend.  We worked on several projects together while he was on the Fairfax County Electoral Board, and he has the same concern for open and honest elections that I have working with the Virginia Voters Alliance.  Please don’t take this article as a screed against Brian personally; it is not, but I do think his quote perfectly encapsulates the fissure between the establishment and conservative wings of the Republican Party, not just in Virginia but also in the rest of the country.

Let me begin by defining some terms.  There is evidently confusion around the term, “establishment”, since I have heard fellow Republicans, even Republican Party of Virginia (RPV) Leadership, claim that they don’t know what Republican Establishment means anymore.

Attracting such go along, get along politicians inbreeds an ideological flexibility that has no problem, when a Republican like Arlen Specter leaves the party, becomes a Democrat, and casts the deciding vote for Obamacare.  See also Governor Charlie Crist from Florida, who bailed on the party when he decided he was going to lose the nomination for Senate in 2010.

Virginia has had its share of flexible GOP-e Republicans in the form of Bill Bolling (Ken C. was not willing to wait in line), Boyd Marcus (sell-out), and most recently Joe May, who having lost his Delegate seat in the General Assembly to a Conservative, had no trouble jumping into bed with the Democrat Party in his “independent” bid for State Senate (I have proof).

In general terms, GOP-e types are big-government politicos who appease their base voters with the pretense of fiscal conservatism, but are moderate or even liberal in regard to the size and role of government.  GOP-e politicians tend to treat Conservative issues as a buffet of political dishes; selecting several hot button issues like “Right to Life” or Second Amendment rights, to stake their claim as a Conservative.

These Republicans are indistinguishable from Democrats in their voting record and governance approach, hence their ease in abandoning the Republican Party.  Their allegiance is to their political power, crony capitalist donors, lobbyists, and special interest groups, taxing and spending like their Democrat counterparts.

What I am referring to by referencing GOP-e is the following:

We are getting to experience this first hand with their reluctance in both the House and Senate to do what they campaigned on for seven years, to actually repeal Obamacare and replace it with a market driven healthcare policy.  Turns out the repeal legislation sent to Obama, knowing it would be vetoed, was just a head fake to get re-elected.

I would recommend the article in Breitbart by Michael Patrick Leahy, about a scathing speech Pat Caddell made at CPAC 2013 about the cozy racketeering relationships in Republican consultant and leadership circles.  You can go here to read the article.

Conservative positions are fairly straight forward.  GOP Conservatives (GOP-c) are the wing of the Republican Party that has its roots in the campaigns and administration of Barry Goldwater and Ronald Reagan.  GOP-c is characterized by smaller, Constitutional government, ending deficit spending, reducing the national debt, strong military and borders, and principled stands on important issues of governance.

So let’s take a moment to analyze Brian’s Facebook statement.

“I’m not confused in my thinking at all” – Well Brian, like many other Republicans, you have bought into the conventional wisdom and Virginia’s Republican culture of accepting a weak RPV.  This culture expects party members to write a check when asked, put a yard sign in the yard, show-up and vote on Election Day, and otherwise keep your mouth shut and opinions to yourself and let the “professionals” run the government.

The TEA Party movement brought a new set of ideas to RPV.  They were not willing to write a check just because a candidate gave lip service to Republican ideals.  They showed up on Election Day to vote, but were unwilling to vote for a candidate just because they claimed an “R” behind their name.  They also were not willing to sit down and be quiet when it came to criticizing the performance of their elected officials.  They took to heart that our elected representatives were in office to represent Citizens in the Federal Government.

We expected our elected officials to govern like they campaigned and were willing to hold them accountable when they deserted their campaign promises.  Needless to say, the GOP-e went into culture shock at the very idea that these political neophytes demanded accountability of their elected officials.  Obviously some of the GOP-e politicians have not acknowledged the change in culture.

“Rs winning is the point of the Republican Party.”  – Obviously putting Republicans in seats of authority is the point.  No disagreement there from any GOP-c party member.  The problem is the party’s acceptance of donating and working for a Republican, either new or incumbent, who violates their campaign promises and who exhibit apparent flexibility in abandoning any semblance of Conservative positions on issues.

RPV, if not the Republican National Committee (RNC), has bought into the political consulting class that advises the party to avoid any and all positions on Conservative issues.  The idea is if no one knows your actual position on issues, you cannot be held accountable when you vote against your constituents.

Also, by avoiding issue positions, people will vote for you based on your obsequious personality, so your election becomes a referendum on your being a nice person.  Culture shock alert:  campaigns should be about substantive issues, instead of personality.  I am personally sick and tired of hearing from a RINO politician (Republican In Name Only) about their being a nice person and therefore deserving of my vote.  Guess what, all politicians are nice people, even Democrats.

“How those folks govern is up to them, not the party.”  – Really?  This is the crux of the problem between GOP-e and GOP-c.  We should not be electing candidates to govern us based on their predilections on policies that are detrimental to upholding the Constitution and the Republican Creed at a minimum.  With a weak political party, one that does not take a position on issues, the elected official feels unconstrained in how they vote.  With no guidance from the party, they are free to cross the aisle and vote with their friendly Democrat buddies.

I hope to eventually see a change in the party culture, where a District Chair tells the sitting Congressional Representative that their voting record in Congress is so contrary to the issue positions of the party, that the District and its Units will not support that incumbent’s reelection.

“The party’s primary role is to get our candidates elected.” – Yes, this is true, except when the candidate has a contentious, unaccountable attitude toward the voters that are responsible for putting and keeping him/her in office.

“You want to play ideological patty cakes, that’s fine, but that’s not the party’s job.” – I don’t consider the Republican Party’s responsibility to identify and craft positions on important matters to the voters as playing ideological patty cakes.  It is a correct statement, however, in that it is currently not the party’s job to determine positions on issues.  This attitude and standard practice is the main reason the Party is in such a quandary between GOP-e and GOP-c.  It is also the reason the country is in such a mess as it is today.  We let our elected officials govern the way they wished and not the way they told us they were going to govern.

Until RPV decides to be a party of issues and accountability of our elected officials and stop this infatuation with personalities and waiting in line for your turn to run, we will continue to be a minority party with the remainder of our majority sitting on the side lines waiting for the party to take a stand.

Later in the same Facebook discussion thread, Brian mentioned that fellow Republicans can have varied interpretations of the Republican Creed.  If that is true, maybe the Creed needs to be tightened up and be more specific.  We have the same problem with the Constitution where the left has used the “Necessary and Proper” clause, the “General Welfare” clause, and the “Commerce” clause to expand the role of the Federal government.

In case you are still confused by the differences between GOP-e and GOP-c, here is a limited list of a few names with which you may be familiar: