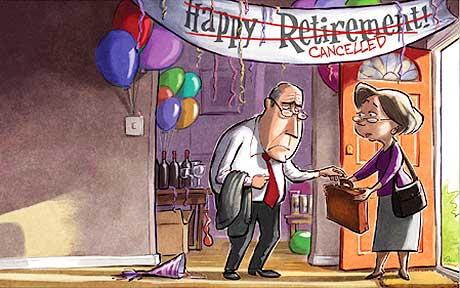 My grandpa liked to say there were “lies, damned lies and statistics.” I think Mark Twain said it first, but whoever it was, he had a point about statistics sometimes being twisted to create something that’s worse than a lie. I thought of that when I read an article by the noted columnist Bruce Bartlett (“Setting a Realistic Retirement Age”). Mr. Bartlett believes the retirement age should be raised. He bases his argument on life-expectancy.

Life-expectancy in the USA was below 65 in 1935, but is in the high 70s today. This made Mr. Bartlett think the retirement age should be raised. Others have written similarly. In every case, the writers believe the Social Security retirement age was originally designed to be greater than the age most people lived to – a kind of sly “conspiracy” to keep most people from ever drawing benefits. But they all misconstrued what life-expectancy really means.

Life-expectancy is not the age people in a past era typically lived to. It is a statistic calculated by adding all the ages people born in a certain year lived to, then dividing that sum by the number of people. Thus, a group of 100 people, of which eighty lived to age 70, ten lived to age 5, and ten lived only six months, would have a “life-expectancy” of 56.6 years – i.e., LE = (5600+50+5)/100. Without data about the entire population, the statistic is misleading.

Past life-expectancy figures were low, in large part, for two major reasons: war deaths and high infant mortality. Over 600,000 Americans (i.e., nearly 2% of the population) – most of them young people – died in the Civil War. More than 400,000 died in World War II.

Before the twentieth century, children died at appalling rates. My great-grandparents lost five of their ten children in the 1870s. Three died of diphtheria on one terrible February day in 1879. Their other five children lived into their 70s and 80s, but the family’s “life-expectancy” statistic was only 40. My grandparents lost two of four children in infancy, making their family’s life-expectancy 37.5. Even my parents and my wife’s parents each lost a baby in the 1930s and ‘40s when childhood illnesses were still dangerous and antibiotics were unknown.

In an old cemetery you’ll see many graves of children and young people. But most people who reached adulthood – excepting women who died in childbirth – tended to live to ripe old ages. The early deaths depressed the life-expectancy number, making non-mathematical analysts think that no one lived much past 40 or 50. But that is a spurious interpretation.

Today, children still die, but far less frequently. It explains the dramatic increase in life-expectancy. Mr. Barlett ignores this. So do most writers in his camp – either because they don’t understand the statistic, or because it is inconvenient to their argument.

People who reach old age now are living longer. Mr. Bartlett cites data showing that men who reach 65 can expect to live 16 more years. (+19 for women.) In 1940, those post-65 expectancies were 11.9 and 13.4 years, for men and women. Mr. Bartlett claims these are the life-expectancies that ‘really matter,” as they determine how much Social Security will have to pay in benefits.

But again he is mistaken. The rest of the population matters, too. Of a hypothetical population of 100, if ninety people live to age 60, and the other ten live to age 100, the age-expectancy of those who reach 65 is 35 years. To Mr. Bartlett, this would look like a big problem, but it would not be. 90% of that population would have paid taxes for forty years, only to die before drawing any benefits. They would more than compensate for the 10% who lived to great age.

Most significantly, Mr. Bartlett and others who make similar arguments ignore the physical and mental difficulty of working to age 70. In many cases, it simply cannot be done. Of course, it’s absurd to think that workers in physically demanding jobs – e.g., construction and most of the trades – can work on to age 70. Many are virtual cripples in their 50s. Even office workers lose acuity and energy, not to mention the vitality and good looks businesses want in sales and other high-profile jobs. (If there is a CEO with a secretary in her late 60s, I’d like to know his name.)

Businesses will find ways to get rid of older workers. Indeed, they are doing so now. All the age-discrimination laws in the world cannot stop them. The case for age-discrimination is exceedingly difficult to make. An added incentive for pushing older workers out is health-care costs. I know people in their late 50s who were laid off from long-time jobs but cannot find new work at the same level.

Will workers in their late 60s have to empty trash baskets at their old offices or flip hamburgers at McDonalds until they can finally draw the retirement they earned? Or perhaps we could adopt the European retirement model, where an old person sits at the entrance of every public restroom, collecting ½ Euro from patrons of the facilities. How does that sound? Not exactly the same as living on the beach in Aruba, is it?

Even doctors and other professionals – who are self-employed and can work as long as they want to – eventually realize that they can’t keep punching the heavy bag much past age 65. A good friend had a long career as a pediatrician and thought he would work indefinitely. He loved his work and was making good money. But with heart trouble and other old-age ailments weighing him down, he finally walked away at age 67. (He said you can get up in the middle of the night for sick kids only so many times, and he had used up his quota.)

There’s a time to work and a time to stop working. The people who picked 65 as the right age for retirement knew something. Letting our workers walk out with dignity, under their own power, to enjoy a retirement they have fairly earned, is something that sets America apart. We shouldn’t arbitrarily change this model based on the lie of misconstrued statistics.