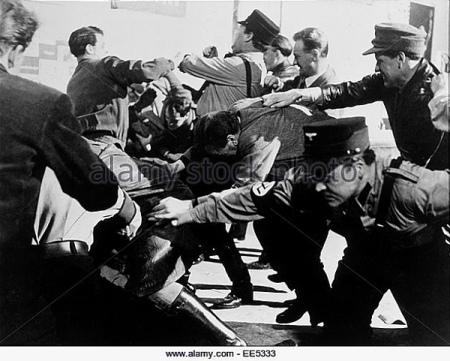 Return of the Brownshirts

In the 1930s, gangs of brown-shirted street thugs smashed Jewish shop-windows, terrorized voters at the polls, and generally raised hell all across Germany until they brought an unlikely ex-Army corporal to power. After watching all this from what seemed a safe distance, Americans soon tasted the poisonous fruit of genocide that cost six million lives and a world war that killed 50 million more.

Accordingly, one would have thought that Americans would be on guard against any political movement that employs those same tactics in our own country. But one would have been wrong. The Brownshirts have come back to terrorize businesses, schools, churches, and even entire governments – this time, in America itself.

These are not right-wing, white-supremacist “militias,” as leftists have warned against for decades. Instead they are the shock troops of the militant gay lobby – grown preternaturally strong via vast support from the Mainstream Media and nourishment by one of the country’s two dominant political parties.

A small cadre of people dedicated to the advancement – indeed, the ascendancy – of deviant sexuality across all of American society has been on a long, rampant march that is laying waste to America’s religious traditions, its time-honored customs, and its societal norms. Anyone who interferes with complete acceptance of homosexual practice – and lately of the absurd new construct of “same-sex marriage” – must be shouted down, stomped, and utterly destroyed. Nothing can be allowed to stand in the way of the Gay Brownshirts, as they sweep from victory to victory over what used to be called the Normal Culture. Those who oppose them are branded “haters” (as this writer undoubtedly will be again).

In 2015 a national media-uproar erupted when the Indiana legislature passed a new law recognizing an individual’s right to request legal redress of any government attempt to compel actions which contravened their religious beliefs. The law didn’t guarantee that any particular religious belief would necessarily prevail in such cases, but stipulated only that a religiously motivated person would be able to argue his case in court. Governor Mike Pence signed the bill, which mirrored a federal law passed almost unanimously in 1993 by the U. S. Congress and signed by President Bill Clinton. The ’93 law was hailed from both sides of the political aisle as a long-overdue protection for “persecuted” religious minorities, such as western-state Indians who use the hallucinogenic drug peyote in religious ceremonies.

The new Indiana law certainly protects peyote-stoned Indians; ditto for obscure religious sects that handle dangerous reptiles in their ceremonies. That’s good, but the heavily Republican legislature and Republican governor of Indiana probably had neither snakes or peyote in mind when they passed their new religious freedom law. More than likely, they were thinking about protecting individuals, businesses, associations, churches and religious schools from being charged with “discrimination” if they didn’t recognize or support same-sex marriage, either personally or organizationally.

Perceiving this probable intention, militant gay activists pounced, mounting a furious campaign to delegitimize the Indiana law by claiming that it would sanction discrimination against people for their sexual preference or orientation. To pressure the state to rescind the law, activists created lists on the Internet of Indiana businesses targeted for boycott. Several governors announced that their state’s employees would not be permitted to attend any professional events in Indiana. The Twitt-o-sphere was flooded with thousands of tweets protesting the “hateful” law, although commentators said the tweet-blitz was a “cyber illusion” created by a handful of known hackers.

Indiana’s governor backpedaled desperately, explaining in repeated public statements that the law sanctioned no such discrimination. But it was no use. The legislature caved, passing a revised law which clarified that it could not be used to defend discrimination against any individual on basis of race, nationality, sexual orientation, etc.

As this furor was unfolding, an “investigative reporter” from Indianapolis radio station WBND roamed 30 miles south of her home base until she found a pizza ship in Walkerton, Indiana, whose clueless proprietors said they probably wouldn’t cater a same-sex “wedding” reception because of their religious beliefs. Aha! Without asking how many wedding receptions were likely to request pizza-catering, national news media jumped on the story with both feet. This produced a new wave of outrage in the social and broadcast media, including outright threats of violence which soon drove the owners to announce that the shop would close – perhaps indefinitely. The Brownshirts had triumphed again. Ruining the O’Connor family’s business was their newest trophy, and an object lesson of the treatment any opponents of the gay agenda can expect.

But the Brownshirts’ victory lap was derailed. Like all zealots, they had finally gone too far. Evidently something in the Normal Culture snapped when reports emerged of the bullying endured by the little pizza shop in Walkerton. An opposition movement established an Internet-fund intended to help the O’Connors. In just 24 hours it raised over $250,000, and after a few more days the total funds pledged and collected had exceeded $800,000. The O’Connors thanked the public for their support, and announced plans to open a new restaurant. (Reports that it would be named “Gay Pride Pizza” were inaccurate.)

Cynics quickly claimed that the whole episode was a “stunt” intended to enrich the O’Connors, but the reporters and the threats were real enough. Thereafter, Big Media lost interest in the story. The Brownshirts had been stopped – at least for the nonce – but the Indiana governor and legislature emerged looking like wimps fleeing from a mob. Some political analysts said Mike Pence’s future in Republican politics was wrecked, but that prediction also proved inaccurate.

Is this America? How did we get to such a place in just 50 years? Like so many untoward developments, it happened not all at once but in many small steps. A long campaign has been waged, quietly but relentlessly, by patient strategists who understood that they could ultimately achieve their goals by simply making one innocuous demand after another – each one advancing the ball a little farther downfield – until full acceptance of their “lifestyle” was finally won. They never got discouraged; they never tired; and they never quit. Somnolent Americans – warmed by the righteousness of their tolerance, and convinced of their sophistication in allowing subversive, decadent lifestyles to flourish openly in our society – rested sublimely, like the frog who is unaware that it is gradually being boiled in the heated pot, until it is too late to escape.

A half-century ago, homosexuals pleaded for society to let them live their chosen lifestyle in peace. “All we want is to be left alone” was their piteous request. “You go your way, and let us go ours…” was their mantra of that time. And being a decent, generous people, we agreed to those terms. We thought the matter was settled. Where’s the harm? All would be well.

But the pleaders had lied. To be “left alone” was not all they wanted. It was just the start of a long march. Perhaps it was all they wanted then, but the times changed, and so did the demands of those advancing “gay rights” – as Big Media began to call their cause. Some journalists and social observers likened it to the cause of civil rights for racial minorities in the 1950s and ‘60s.

Denizens of the Normal Culture were vaguely aware that attitudes toward homosexuality were changing in media, government and academia, but most people thought none of it would affect their own lives. In the early 1990s I warned a senior vice-president of the engineering firm I worked for that gays would demand a “place at the table” to promote their particular interests. “Oh, that’s ridiculous. It can’t happen,” he replied.

Now here we are. Gay activists – emboldened by the timidity or indifference of government officials, business executives, religious school administrators, and even church-leaders – want status as a “protected class” in business, government and academia. They demand the full benefits of quotas and affirmative action in hiring and enrollment. Their Brownshirts march confidently toward what looks like final victory in the quest for full legitimization in American society.

The furor in Indiana was just an opening skirmish in an all-out war on the Normal Culture. The Gay Brownshirts’ only serious opponents are Evangelical Christians and the U. S. Supreme Court. These keep disrupting the Gay Pride victory-parade, as we saw in a recent Supreme Court decision. A Colorado baker named Jack Phillips had declined, because of religious convictions, to bake and decorate a wedding cake for the “marriage” of two gay men. When the State of Colorado fined him $135,000 for illegal discrimination, Mr. Phillips sued. After his lower-court appeals failed, the Supreme Court took the case. There a 5-justice majority found for Mr. Phillips, saying that a tolerant society must accommodate good-faith dissent based on religious principles.

Gay-rights advocates have brushed off the decision, saying that it was “narrowly tailored” to the Phillips-case, but conservative analysts hail it as “far-reaching” and a likely model for similar cases. Has the worm has turned? We’ll see. But conservative voters certainly won’t forget that Mr. Trump’s Court-appointee, Justice Neil Gorsuch, was the deciding vote in the gay wedding-cake decision.

The Court’s stance on the wedding-cake case is encouraging, but unless more Americans decide to contend for it, Christianity will be vilified, stomped, and utterly discredited as an important voice in our culture. Militant gays will have won (as Robert Southey said of the Battle of Blenheim) “…a Famous Victory…” And we’ll find out what living in an entirely pagan culture is like. Short of a real religious revival in the country, there will be no going back. 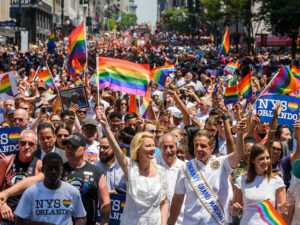 Return of the Brownshirts was last modified: June 18th, 2018 by Woody Zimmerman
27 comments