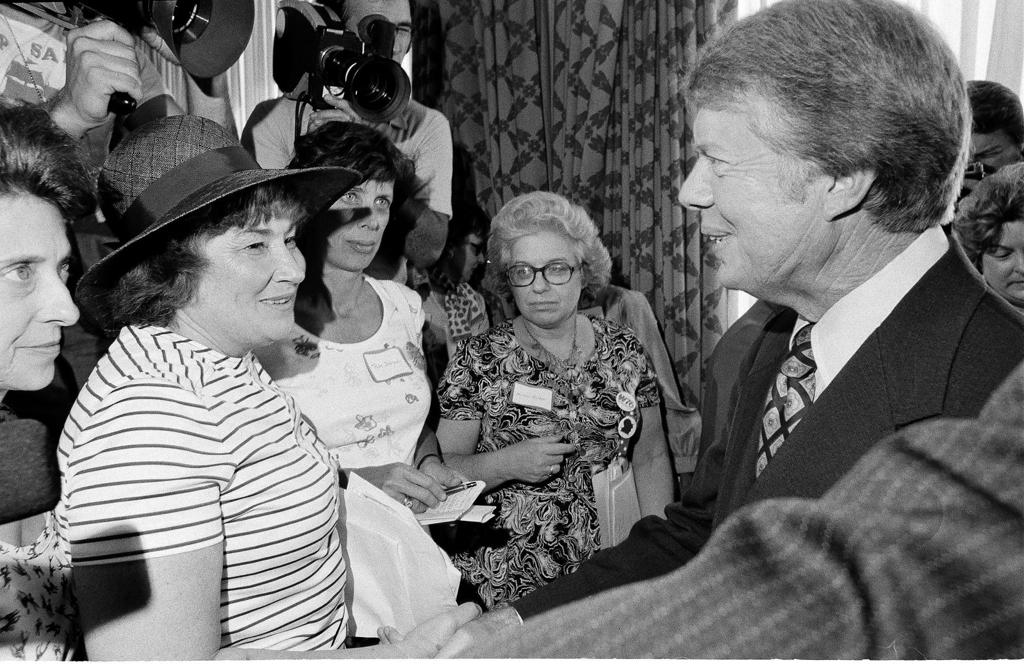 Many Americans think of the Equal Rights Amendment (ERA) as an issue from another era in American history.  And so it is – a 22-word amendment to the Constitution first proposed in 1972, fiercely debated, but failing of ratification by the deadlines Congress established, then extended by majority vote, for it.  But for some advocates, including prominent politicians, the ERA is very much alive and will become a part of our Constitution, they think, if just three more states “agree” to it, instead of the 38 normally required for an amendment to become part of the Constitution.  And one of those advocates is on the verge of taking a powerful post where he might make all the difference.

Consider the ERA’s unique history. The amendment was approved, as the Constitution requires, by two-thirds majorities in each house of Congress in 1972 (before the Supreme Court abortion rulings) and sent to the states for ratification.  As approved, the preamble to the ERA gave the states seven years in which to ratify the ERA. The ERA met with swift approval in many states, but its broad implications, including on abortion, and the intellectual and political leadership of Phyllis Schlafly and her Eagle Forum slowed its march. When the initial deadline of March 22, 1979 was looming, Congress voted to extend the deadline to June 30, 1982 – but did so by a simple majority vote.  The second deadline came and went with no new ratifications, and five of the original ratifying states voted in the meantime to rescind their approval of the amendment.

The amendment is, therefore – and rightfully – legally dead and unavailable for ratification.  But Nadler and others do not want to restart their engines and propose a new ERA, with or without an abortion neutrality amendment.  They want to use ex post facto maneuvers and judicial passivity to revive the ERA by this radical and unprecedented “three-state” process.  And they think they have fresh reasons for doing so.

Protecting Roe at Any Cost

The contentious and tawdry fight over President Trump’s Supreme Court nominee, Brett Kavanaugh, has shown that the Constitution itself does not support abortion.  The Justices themselves legalized abortion in Roe v. Wade.  The Constitution did not establish such a right.  Should the moribund ERA be “ratified” under Nadler’s scheme, the history of the amendment shows that abortion would become constitutionally protected. Nadler and ERA proponents fear that President Donald Trump will appoint judges who will undo Roe.  Especially now, the ERA is an end run around the true meaning of the Constitution on this question.

Scholars have long acknowledged that Roe was a weak prop for abortion.

Harvard’s Laurence Tribe (pro-Roe and ERA) has written: “One of the most curious things about Roe is that, behind its own verbal smokescreen, the substantive judgments on which it rests are nowhere to be found.”  John Hart Ely, past Dean of Stanford Law School, stated that Roe v. Wade “is not constitutional law and gives almost no sense of an obligation to try to be.  What is frightening about Roe is that this super-protected right is not inferable from the language of the Constitution …”[2]

Before Ruth Bader Ginsburg became a Supreme Court Justice she shockingly stated, “Frankly I had thought that at the time Roe was decided, there was concern about population growth and particularly growth in populations that we don’t want to have too many of.”[3]

Ginsburg wrote in 1985, “the Court presented an incomplete justification for its action … the Court’s Roe position is weakened … by the opinion’s concentration on a medically approved autonomy idea, to the exclusion of a constitutionally based sex-equality perspective.”[4]

Again, during her 1993 Court nomination hearing, Ginsburg said:  “It is essential to woman’s equality with man that she be the decision-maker, that her choice be controlling.  If you impose restraints that impede her choice, you are disadvantaging her because of her sex.”[5]

Ginsburg also thought it was unwise to publicly acknowledge the ERA-abortion link, “I understand the view that for political reasons the reproductive autonomy controversy should be isolated from the general debate on equal rights, responsibilities, and opportunities for women and men.”[6]  She told a 2014 National Press Club gathering, “If I could choose an amendment to add to the Constitution, it would be the Equal Rights Amendment.”[7]

Because legal abortion has no actual constitutional authority, abortionists and their Congressional allies are convinced they need to add the ERA to the Constitution to keep abortion “legal.”  Taking a radical short cut to this goal is, in their view, self-justifying.

The ERA: Dead Letter or Frozen in Time?

The ERA was sent to the states on March 22, 1972, ten months before the January 22, 1973 Supreme Court decisions in Roe and Doe v. Bolton struck down the abortion prohibitions of all 50 states.

The 1972 ERA states, “Equality of rights under law shall not be denied or abridged by the United States or by any State on account of sex.”

Liberal Congresswoman Bella Abzug (D-NY), speaking in support of the ERA in 1971, told the House Judiciary Committee, “Thus the amendment … eliminates all existing legal distinctions based on sex and rejects the assumption that sex is ever a reasonable legal classification.”[8]

Like Ginsberg, pro-ERA Members of Congress also downplayed the ERA-abortion connection.  Sen. Birch Bayh (D-IN) wrote an article for the Notre Dame Law Review six months after the ERA was sent to the states without even mentioning the word abortion.[9]  An ERA leader, Congresswoman Martha Griffiths (D-MI ), claimed the ERA “has absolutely no effect on any abortion law of any State.”[10]  And the 1972 U.S. Senate Report on the ERA, written by Sen. Bayh, claimed that legislation applied to one sex would not necessarily be invalid.[11]

Yet the premier 1971 Yale Law Review article by ERA “brain trust” lawyer Thomas I. Emerson stated:  “Protection against indirect, covert or unconscious sex discrimination is essential to supplement the absolute ban on explicit sex classification of the Equal Rights Amendment. … The courts will have to maintain a strict scrutiny of such classifications if the guarantees of the Amendment are to be effectively secured.”[12]  ERA advocates constantly cite the Yale Law Review article as definitive for the ERA’s legal effects.  “Strict scrutiny” under the ERA applied to abortion law means abortion on demand.

Major ERA supporters gradually affirmed that courts would make clear the ERA-abortion connection was legally inevitable.  In the 1976 case of G.E. v. Gilbert, Emerson and Ruth Bader Ginsburg authored an amicus brief for the Women’s Law Project challenging General Electric’s interpretation of ERA-like language covering GE’s insurance disability program:  “If G.E. were a state employer subject to the ERA, its treatment of disabilities related to pregnancy and childbirth would not survive the scrutiny appropriate under the amendment.”[13]

When the ERA was reintroduced into the U.S. House of Representatives in 1983, it followed word for word the text of the losing 1972 ERA.  During the House hearing, Congressman James Sensenbrenner (R-WI) cited the legal analysis from the Library of Congress’ American Law Division on the impact of the proposed ERA on the legality of abortion and the Hyde Amendment’s prohibition on using federal tax money to fund abortions:  “… the conclusion indicated that sex is a suspect classification and the Hyde amendment would be overturned under strict scrutiny by the United States Supreme Court,” Sensenbrenner said.[14]

On the other side of the Capitol, Senator Orrin Hatch (R-UT) asked  Sen. Paul Tsongas (D-MA) what he thought would be the effect on the legality of abortion and the tax funding of abortion (Hyde Amendment) of his identical, reintroduced ERA.  Sen. Tsongas answered that federal courts would make those decisions.[16]

Pro-life leader Representative Henry Hyde (R-IL) testified before the 1983 Senate Judiciary Committee hearing on the ERA: “Suppose that the Federal Government provided funding for procedures designed to treat most diseases, but enacted a special exclusion for sickle cell anemia, which affects only black people.  The courts would certainly declare that exclusion unconstitutional. Other laws regulating abortion would be treated similarly.  Conscience clauses … which give doctors and nurses in State-supported institutions the right to refuse to participate in abortions would be treated like laws giving State officials the right to deny services to blacks but not to whites.”[17]

Chair-to-be Nadler is among the more than 206 current Congressmen and Senators, however, who are supporting legislation which purports to revive the original 41- to 46-year-old ratifications from 35 states and to do so by a simple majority vote in Congress.  ERA supporters know the ratification deadline ran out in 1982.  President Jimmy Carter wrote to House Judiciary Chairman Peter Rodino (R-NJ) on July 12, 1978, “I am hopeful that ERA will be ratified before the present deadline expires.”[19]  Other ERA leaders knew they could not secure ratifications from 38 states by March 22, 1979, so they lobbied Congress for more time, which resulted in the majority vote for a 39-month “extension.”

Now the ERA manipulators want to ignore the 39-month extension deadline their political ancestors lobbied Congress to enact and seek to add alleged “ratifications” from Nevada (2017) and Illinois (2018), which were passed 35-36 years after the ERA deadline had expired.  They also refuse to acknowledge ERA ratification rescissions passed by five states in the 1970’s.

ERA supporters are pursuing grassroots efforts now to gain support in the 13 state legislatures which have never ratified the ERA (before or after the legal deadline).  If only one of these states “ratifies” the non-pending, “dead ERA” in 2019, Nadler’s majority Democrats on the House Judiciary Committee will credential the three-state tactic as authentic and constitutional. Defeating this legerdemain requires a multi-level response, including grassroots efforts in the Congress and in the 13 remaining states ERA advocates are likely to target.

Every pro-life American should contact their two U.S. Senators and Congressman today (and those newly elected to Congress on November 6) to oppose this illegitimate, duplicitous, and unconstitutional three-state ERA ratification process.

Church bulletins should alert members of their congregations to increase citizen contact with legislators to make them aware of the grave threat the ERA poses to the lives of unborn children.

Further, if you live in one of the following states that have not ratified the ERA – Alabama, Arkansas, Arizona, Florida, Georgia, Louisiana, Mississippi, Missouri, North Carolina, Oklahoma, South Carolina, Utah, or Virginia – please contact your state legislators to oppose any three-state ERA ratification maneuver.  ERA proponents are active right now, lobbying organizations and local officials in these 13 states to support ERA ratification by their respective state legislatures.

If you live in Illinois or Nevada, contact your state legislators to ask them to rescind their bogus ERA ratifications from 2017 and 2018.

A three-state ERA ratification process is a revolutionary act on the part of progressives to graft the legal authority for the killing of unborn children into our Constitution.  It will set back the cause of life for decades.  Inaction or silence in the face of this threat is unacceptable.  Act today: the lives of children and the future of Judeo-Christian institutions in America hang in the balance.