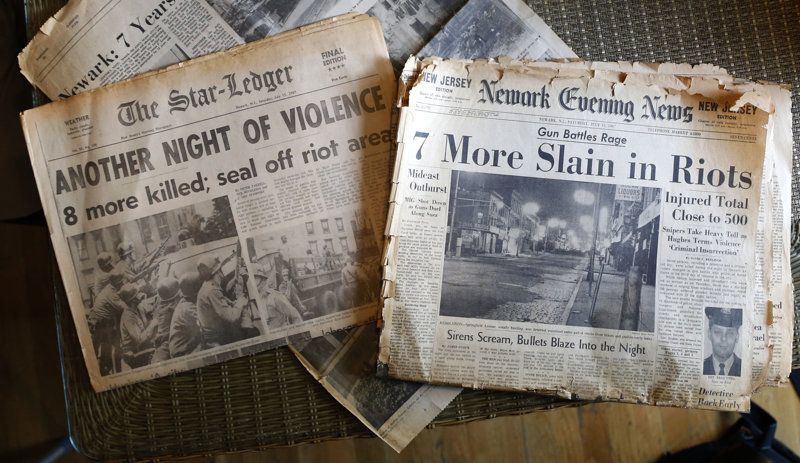 Few events in the last 50 years were as pivotal in terms of how and where we live, work, and whom we associate with than the riots that rocked American cities in the 1960s.  What I call “Revolution Summer, 1967” was noteworthy above all other “long hot summers.”  Some 160 cities erupted, and as July 1967 closed, after days of rioting, 47 lay dead in Detroit, 26 in Newark and one (a police officer) in Plainfield, NJ.  Most of these victims were black. 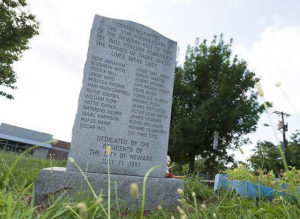 1997 memorial to the victims of the Newark riots 40 years earlier (Photo Credit: NYT)

I grew up in New Jersey during this era, worked at The Star-Ledger newspaper in Newark as a proofreader, stringer and reporter (1978-1983), and covered Newark and Plainfield.  In addition, I have served Leesburg (an urbanized town) for 10 years as a local elected councilmember and county supervisor.

I have studied the 1960s riots extensively and have lived in numerous cities with large minority populations, too.  No, I am not an “expert,” just an observer, and here are a few examples of how the race riots reshaped our country and politics:

What is the lesson here? First, the loss of a commercial tax base in these cities could not be replaced by government largesse alone.  Having political power is no substitute for economic power and advancement.

Today, Newark is rebounding – not because of government, but because Millennials and developers are discovering bargains on real estate compared with New York and Hudson County, NJ.  Newark is in a good position due to its close proximity to New York, which is unaffordable to young people.  DC is seeing a housing boom.

Second, it’s hard not to understand why African Americans rioted in so many cities in the late 1960s.  They were angry and resentful of the white establishment in their communities, notably the police, which had few black officers.  Blacks were migrating from the Jim Crow South and their expectations in the urban centers were not being met.

The people who agitated, looted and burned did so to their detriment as did those who rioted in Ferguson, MO, and Baltimore in recent years. The “Black Lives Matter” movement has fizzled and has garnered only sympathy from the media, academia, Hollywood and radical activists.

Violence only begets more violence.  It’s arduous to “work through the system” but Martin Luther King Jr. did it successfully.  He aptly noted:  “The ultimate weakness of violence is that it is a descending spiral, begetting the very thing it seeks to destroy. Instead of diminishing evil, it multiplies it.”

Links to learn more about the 60s riots

NBC News series on Detroit after the riots

Footage of the 1967 Detroit riots and interviews with Gov. Romney others

NEWARK – Examination of Newark’s efforts to rebound after the riots

[…] During and after the 1960s riots, urban whites in the Democratic Party’s New Deal/Great Society held black rioters in disdain, but white mayors and governors were not reluctant to quell the unrest.  However, these largely blue-collar voters moved out of the cities in drove to the suburbs and exurbs and became Republicans over time.  I wrote about this phenomenon here in 2017 REVOLUTION SUMMER 1967 […]

Excellent and interesting read!! My father was in Vietnam in 67 during the turmoil and my mother wrote to him two or three times a week describing what life was like in the United States during that pivotal year. One of my many unfulfilled journalistic dreams has been to compile those real life accounts of her first hand view (she was always keenly interested in world events and politics) and my father’s replies to her about what was happening in his world, the world of 1967 Vietnam.