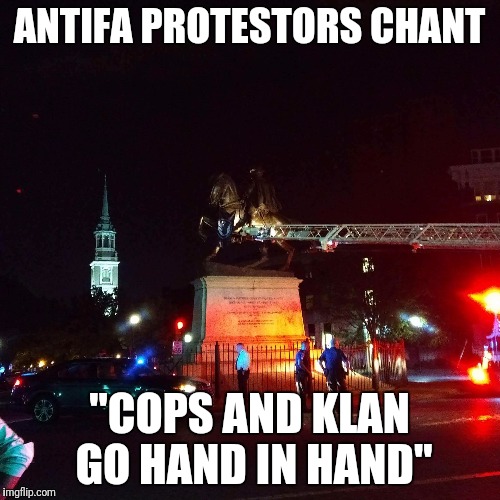 A rose is a rose is a rose, by any other name. So shouldnâ€™t a congregation of violent extremist idiots follow the same nomenclatural standards?

Last night in Richmond, barely 24 hours since a young woman and 2 brave state troopers tragically lost their lives, the phony charlatan gang of thugs known as â€˜ANTIFAâ€™ managed to pry 100 or so adult children away from their dorms for the purpose of terrorizing Richmond residents. Several assaulted area residents attempting to film their misguided display, and Monument Avenue residents were awaken to sounds of frenzied protesters vandalizing their property. Well, free speech â€“ right? Yes, free speech; as in the journalist who wasÂ hospitalizedÂ for daring to film these brats.

Letâ€™s call a spade a spade. I have personally witnessed the outright hypocrisy and violence from a group that calls themselves â€˜Antifascistsâ€™ yet cant get enough of silencing free speech and throwing bricks at people who donâ€™t agree with them. Last night was an atrociously stupid display that couldnâ€™t have come at a worse time.

Making matters worse, our ‘leaders’ fail to recognize violence when it benefits them. Â Congresswoman Maxine Waters tweeted “Not both sides Mr. President. Your side.” Racist Vice-Mayor Will Bellamy, who has referred to Caucasian women on twitter as ‘white bitches’ continues to blame one side. As foul as the Klan and Nazis are Mr. Bellamy, Antifa was there swinging bats and spraying pepper spray. They had come looking for a fight, not dialogue.

This nation needs to heal. wielding thugs with masks, be they left or right wing, are probably not part of that healing process. The ones who actually change history are the nonviolent voices with their eyes on the prize. Ghandi and Martin Luther King have laid down the blueprint; yet some people seem to feel Goebles or Farakhan offer a better model.

I call on the leadership not only at VCU but also in the City of Richmond to get off their hands and lead. No more veiled rhetoric or divisive double speak. How many Richmonders are living in poverty and we are arguing about statues? Meanwhile, the white-nationalists are planning another â€œmuh statues!â€ rally onÂ September 16th. Mayor Stoney, the ball is in your court.

[…] has previously reported on local groups terrorizing the citizens of Richmond; yet has anyone noticed the slimy mud holes from which this filth seeps? Well, in the back of the […]

When Antifa burned and rioted at Berkeley I didn’t think that much of it, at least not in the context of what the local mayor of Berkeley had to do with it – I figured, hey, they are all just morons and it was a surprise and they didn’t know how to deal with it.

Now, I’m not so sure. When the mess in Charlottesville took off I thought, wait a minute, surely they knew this was going to happen, right ? I mean it had to have been obvious that antifa and these nationalists were going to go at it, so where were the cops ? Why didn’t they get involved and keep people separate ?

NOW, after days of news coverage with barely a MENTION of antifa, I’m starting to think there is a lot more to it. I think the left is SUPPORTING antifa at this point. I’m starting to think that these mayors might be intentionally turning a blind eye and letting antifa tear everything up so they can blame everything on Trump or something. As if Trump has anything at all to do with local policing, or in this case, the total lack of it.

Is Antifa operating with impunity ?

Is Antifa being given tacit consent to beat the *&^% out of people that left leaning politicians don’t like ?

Looks like the angry left is going after John Adams, too…

The antifas are the Hitler brownshirts of today, and they will assault you if you speak out. Over the weekend they picked out a relative meaningless group of white supremacist fools to attack, and they intentionally left the clear message that you will be punished and even killed if you “resist” their socialist totalitarian ideas. These people are now quite active in Western Europe, spreading chaos and injury at every chance.

, It is not in the mayor’s hands. It is in your hands, my hands and people like us to say, enough is enough. These are no more then thugs in training and should be treated as thugs. Dismiss them out of their schools until they can act in a civil manner. Treat Antifa as a terrorist organization and handle it as a terrorist organization.
When I was young, once on a Halloween night a carload of us “pranksters” threw a cherry bomb in a mail box. it blew out both ends. Three days later a car with FBI agents showed up at our school and we got called out, was dismissed from the school for a period of time,We had to go and immediately buy a new mail box and install it under their watchful eyes, apologize to the home owners and were told it was a federal offense and we would be put into jail the next time this happened not only to us but any classmates. Let me tell you on this 17 year old at the time -THAT MADE AN IMPRESSION because we knew they meant it and 67 years later, I still remember it as does my classmates.of the time. Nothing racist about it, they did not care, your background, color, etc.made no difference. It was just plain civility and responsibility we were taught that day. It stayed with all of us and our parents FULLY supported the officials plus we got “grounded” at home.

Fair enough, thanks for sharing