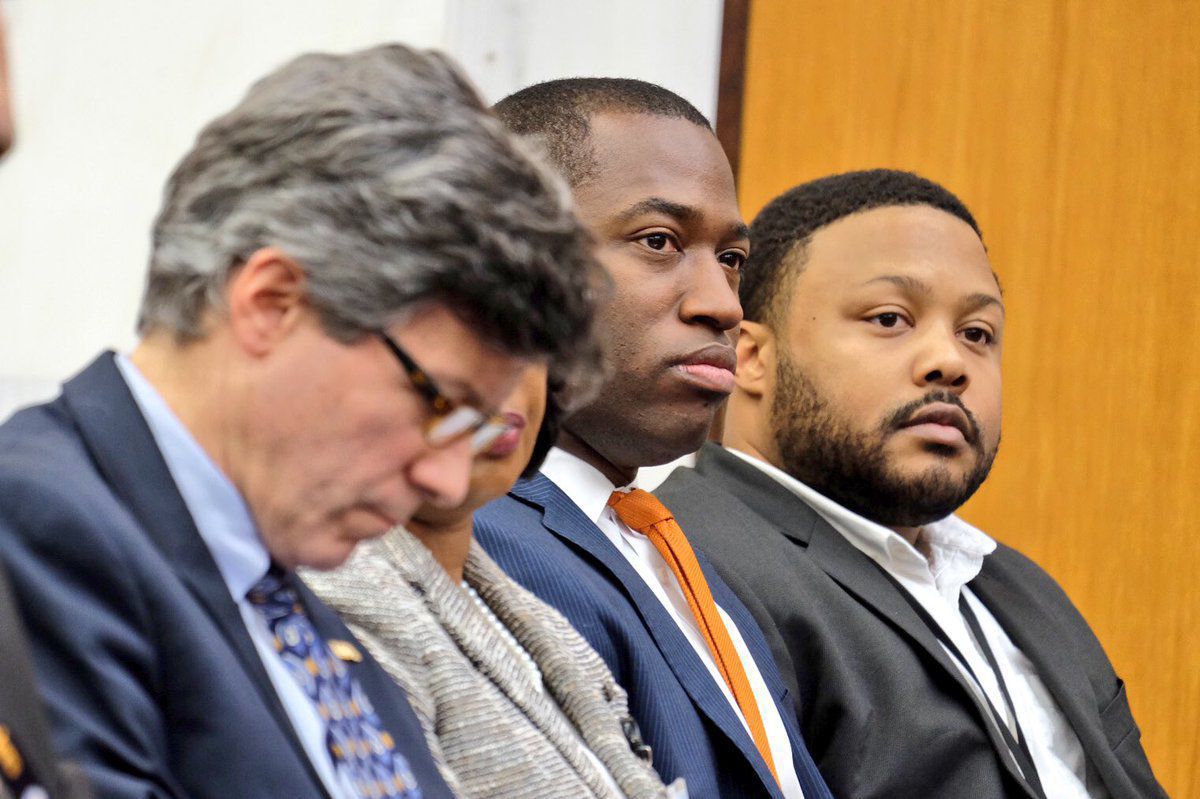 Richmond Mayor Levar Stoney has hired an executive assistant who was convicted in 2015 of embezzling $240,000 from the state. The intended use of the money was an educational program on substance abuse. Steven Hammond Jr. embezzled the money while he was a program coordinator for the Virginia’s department of Alcohol Beverage Control. He plead guilty to the theft that began in 2009 and continued until 2013. He had written checks to friends who then shared their bounty.

Hammond could have faced up to ten years in prison but Judge John A. Gibney Jr. was impressed by Hammond’s statements of regret. The Judge sentenced him to only 3 years probation, 240 hours of community service and payments of $150 a month.

Mayor Stoney said he hired Hammond because he “believes in redemption.”

“The mayor has worked throughout his public service career to advance the idea of restorative justice, and Steve’s hiring demonstrates that he practices what he preaches,” Stoney’s press secretary, Jim Nolan, said in a statement. “Steve deserves a second chance.”

Who will Mayor Stoney hire next?  Joe Morrissey?

More on this hard-to-believe story here and here.

Just hold the mayor responsible for any indiscretion. No problemo.

The mayor did hire the felon so yeah he’s responsible. It now comes out the felon violated his parole in 2016 and STILL no jail time?! Yeah something fishy here!

This will never happen, but I would love to see statistics
showing the disproportionate number of black politicians, per capita, caught in felonious corruption as opposed to white politicians.
Did I just say that?
YES I DID!

Go look it up, then divide it by population, economics, party, location — use your computer and wolfram alpha.

And then go look at the people who look the other way, then divide those the same way and eventually you get to why Justice wears a blindfold.

No need to look up the obvious. It’s like looking up the crime map of America, and wringing your hands, asking why here, why there? All you have to do is check the demographics, and you have the answer

Criminals cause crime, there are a rainbow of reasons why they do so, the easy answer is that there is no easy answer other than don’t travel in places on the map marked ‘Here be Crime.’

Rocinante, I agree with many of your posts, and I agree with your statement that criminals cause crime. However, I couldn’t care less about the “rainbow of reasons” why these low life scum commit crimes. But, judging by your reply, you, like many bloggers on this site suffer from a blind spot.
Blacks, far outnumber, disproportionately, the violent crime in this country, and worldwide. Moreover, the black on white violent crime in this country has been at an epidemic level for years, exacerbated by the racist pig Obama, Hollywood, and academia. And, 99 percent of it has been censored by the MSM, including the frauds at Fox News, and talk radio. (Occasionally, Sean Hannity and Laura Ingraham would bring it up on their radio shows).
Please, don’t reply with the usual crap that Democrats and Cuckservatives vomit out. You’re better than that.

I don’t think you are wrong in the abstract, certainly statistics are on your side, but the intentional destruction of the black American family and culture by the progressive movement including and thanks to Margaret Sanger and Planned Parenthood is at the top of the rainbow.

Black on black crime is worse than Black on white crime and you are right that THAT is at epidemic levels.

But now that we’ve been dealt this crappy hand, how do we play to win?

If I were King I would disperse the population concentrations that give rise to the crippling cycle that creates such self-defeating attitude and culture.

But I’m not King, and have enough foolish optimism to think that things can be fixed.

I am not wrong in the abstract, nor in the reality of the situation. Brutal violent crimes are committed every day by blacks on whites in this country. There are a few websites that report on this, all documented, many with video.
I am thoroughly familiar with Margaret Sanger, et al. Whether the destruction of the black family was intentional is debatable, IMO. However, I never did study it out, other than a glancing look.
Black on black crime is more rampant, due mostly to the targets being close at hand, etc. That’s not my problem, that’s theirs. “How dare he say that.” Oh yeah, only blacks and Hispanics can be for their race. A white man by even saying the phrase “white man” brings shock to the American sheeple. But, I digress. Black on white violent crime is not just about stealing money. Much of it is motivated by extreme hate. (One example, see Eldridge Cleaver’s book, “Soul on Ice”).
You state we have been dealt a crappy hand; how do “we” play to win. Two things: 1. The word “we” has been eliminated from my talking points for years when referring to us Americans; there is no “we” anymore.
2. “Playing to win” for me, is staying informed of what is really going on in this country, and worldwide. And, also to protect my wife, neighbors, and surrounding communities.
“If I were king,” I would contain the cancer, and destroy it where needed, not disperse it. Look what the Muslim cancer has done to Western Europe.

I appreciate you.
With respect,
John

Kinda like when people complain about there being more of one race in jail then another. Duh?! More of that race commits crime!

It appears not to be to deep of a talented roster.
Redemption is one thing someone (of quality) should have filled this void without having to look toward a redeemed individual.

If it’s a political appointment, he can do what he wants.

Are you say Richmond should have elected Joe instead?

FYI, Richmond is not a state.

And therefore there can be no embezzlement?

This is outrageous. Rewarding an un-incarcerated felon with a city government job is lunacy. Hammond won’t have this paid off until 2150, not including interest. How did he escape jail time? What was Stoney thinking? Poor Richmond. Glad I don’t live there.

Not much I can add to that.

Fortunately we have independent cities here in the Commonwealth. They being said, my own Henrico is pretty much a smaller Fairfax County at this point.

Why would anyone expect anything different from a mayor with a history of association with criminal political violence? He may be charming, and he may seem inspiring or whatever, but underneath is someone willing to go to really horrible lengths (or to excuse or ignore such behavior) to advance the leftist cause.

Steve, I have family In Richmond and this is personal to me. My brother in law, who runs a local art&entertainment blog, had Stoney knock on his door and couldn’t stop gushing about what a ‘nice man’ he was. Basically gave him free publicity.

Start building the carriage house, you’re going to get some permanent house guests in the future.

Seems like Detroit had a mayor like that for some time, didn’t seem to hurt them right?