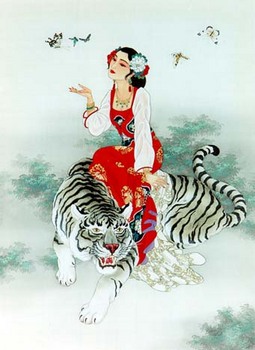 Recent developments in various cities across the country have reminded me of a famous limerick, originally attributed to W. C. Monhouse:

A smiling young lady of Niger
Went out for a ride on a tiger.
They returned from the ride
With the lady inside,
And the smile on the face of the tiger.

Limericks make us laugh – often at some sly, off-color humor like “The man of Madrass” or “The Barmaid of Sale” – but they usually don’t teach us much. Occasionally they do, however. This is one of those times – metaphorically, at least.

Through most of the past year, numerous Democrat-run cities have endured riots which damaged property worth many millions of dollars, injured citizens, and caused at least 25 deaths. (An accurate count of the latter is almost impossible to find, due to media-suppression.)

In most cases, city mayors and state governors soft-pedaled the riots – calling them “mostly peaceful demonstrations” that were protesting a particular police shooting or racial injustice in general. In some cases, the demonstrations were initiated by citizens who were genuinely concerned about racial relations in the country. They were not out to cause damage to property or to injure anyone. But they were soon joined by violent elements from Antifa and Black Lives Matter who smashed windows, looted and burned stores, and hurt people. An unofficial count estimated that 48 cities across the country suffered riots of this kind at some time during 2020.

“…mobs are roaming across the nation’s great cities: smashing, looting, burning, hurting and even killing, while babbling young radicals assure us that all this is necessary to purge the unspeakable crime of ‘systemic racism,’ which has infected America for over 400 years. The wholesale trashing of businesses and property is referred to as ‘unfortunate collateral damage,’ in this noble campaign to remake the country by pulling down its historical monuments, wrecking its economic and social structure, destroying minority-owned businesses, and abolishing the ‘obscene tyranny’ of organized policing…

“Reports have also emerged that prosecutors are giving a pass on criminal charges to protestors arrested for rioting in several cities. In St. Louis, the District of Columbia, Philadelphia, and New York, felony charges against hundreds of people who were arrested for theft, vandalizing and arson have been dismissed… In New York, where a new bail-reform law has crippled judges’ power to keep violent offenders locked up, the criminal justice system is in an uproar. Police Benevolent Association President Pat Lynch has called the controversial law ‘asinine.’

“In Minneapolis, where the original atrocity against George Floyd occurred, a proposal to eliminate the city’s police force and replace it with a ‘community-based public safety model’ (i.e., a bulldog with no teeth) is supported by a majority of the City Council. Mayor Jacob Frey opposes the move, but insiders say a majority of the council supports it and will probably enact it over the mayor’s veto. ‘This council is going to dismantle this police department,’ said Council Member Jeremiah Ellison. Representative Ilhan Omar (D-MN), whose congressional district includes Minneapolis, has also voiced support for the council members’ plan.”

In some cities, the rioting and civil disruption went on for weeks or even months. Rioters in Seattle, Washington, seized control of a six-block section of the city, declared it to be the Capitol Hill Occupied Protest – later the Capitol Hill Autonomous Zone (CHAZ) – and barred police or other city officials from entering the area. Originally covering six city blocks and Cal Anderson Park, the CHAZ was established by protesters on June 8, 2020, after the Seattle Police Department (SPD) left its East Precinct building. Police finally re-established control over the area on July 1, 2020, after the occupiers pulled out.

An accurate accounting of the many violent riots that occurred during the year is obviously impossible in this column-space. Attempts to describe the evolving national situation were made by this author, by other writers in thebullelephant.com and in other conservative publications. We did our best to publish accurate reports, but Mainstream broadcast media and left-slanted publications paid little attention to the rioting. Their non-reporting produced a segment of citizens who either knew nothing about the riots, or else thought the “mostly peaceful” protests over the death of George Floyd were being exaggerated by conservative media.

A neighbor, who reads only the New York Times and the Washington Post, thought I was crazy when I mentioned the city-riots and the kid-glove treatment being given to rioters who had smashed, looted and burned businesses last summer. He knew nothing about all that, and didn’t believe my report.

Big Media’s non-reporting of the rioting was remarkable enough, but the really curious aspect was the tolerance for violence and destruction shown by mayors and governors in Democrat-run cities and states. In fact, it was pretty obvious why they were so tolerant. They were simply acting as a forward arm of a national effort to wound President Trump severely enough that voters would deny him a second term. Democratic city and state officials were so desperate to give The Donald the bums-rush that they were willing to sacrifice good order and the wellbeing of their citizens to make it happen.

Those Democratic mayors, governors and district attorneys who countenanced violence and disorder as a tool for getting rid of President Trump probably expected a return to tranquility and good order, once that objective had been accomplished. To produce a radical result, they went for a ride on the “tiger” of rioting and disruption. But they forgot something important about riding a tiger: you can’t get off, because – as the famous limerick teaches – you’ll be eaten if you do.

Today, with Joe Biden issuing scores of leftist executive orders from the White House basement, blue state and city officials are once again seeing violence, looting, burning and killing erupt in their jurisdictions. Maybe they thought that was all over, with the hated Trumpster out of the way. But they were wrong.

As one masked, anonymous rioter observed: “this isn’t the end of all this; we’re just gettin’ started. You ain’t seen nuthin yet. It’s all got to go so we can rebuild from the ground up.”

Recently I’ve seen TV-news reports about attempts in some cities to establish curfews, repel rioters with phalanxes of armed cops, and make arrests – all in contrast to their earlier hands-off policies of standing back and letting “protestors” have a free hand. At this writing the jury is still out – literally – on whether the weakened, defunded and demoralized police forces of Democrat-run cities and states have the strength and grit to deal with organized rioters who have become accustomed to lax treatment.

History shows that it can be very difficult to convince an enemy that you are now strong and resolute after you repeatedly showed him that you are weak and spineless. I once heard a veteran of the Pacific campaign against the Japanese Empire describe what it took to beat an enemy whose soldiers believed they were physically, morally and attitudinally superior to the American soldier.

“They thought we weren’t tough enough to take them,” he said with a wry grin. “But they found out differently.”

Antifa and BLM are currently getting millions of dollars in “tribute” and protection-money from weak-kneed American businesses and government-agencies. Convinced of their own superiority, those organized rioters might be an enemy that will need the same level of persuading as our former Japanese enemies, before they let us have our country back. It could be a deuce of a fight.