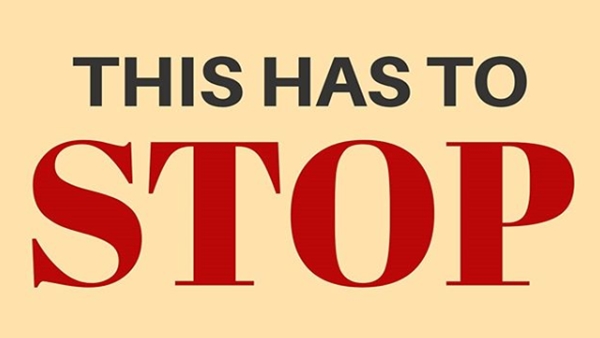 Right From the Start: I Just Can’t Stand the Hate

It’s terrible, it’s bitter, it’s hypocritical, it’s divisive and I can’t stand it anymore. It has now crept into every facet of American life and it must stop. I do not want to hear it anymore.

The low hanging fruit is the rioting, burning, ransacking, and looting in many of our cities. There are legitimate peaceful protesters with a bone to pick, but it’s hard to make them out through the smoke and mayhem.

You want to end systemic racism? Great. Let’s start with the root word ‘system’. The implication is that racism is built into the system. OK, let’s go after that. What do Washington, Baltimore, Atlanta, NYC, Chicago, Detroit, Los Angeles, Minneapolis to name a few have in common? In 2020 they are all run by people of color. That is great because people of color should be able to elect people from their own communities.

The KKK, the poster boys for violent racism and universally scourged by decent society, was never endorsed, supported or connected to the Republican party. It was the militant arm of the Democrat party. LOOK IT UP! It fought the Republicans from the end of the civil war until the Democrat Party eventually turned its back on them in the late 60’s and they are only an emaciated shadow of their former selves with no party to call home in 2020.

What about this newly found hatred of anything related to the antebellum south? It’s a movement to hate any white person who has lived south of the Mason-Dixon line for the last 300 years. Hell, the Dixie Chicks, proud liberal Democrats, are being pressured to change their names. (with “Dixie” & “Chicks” both offensive, it would seem) This kind of scorched earth policy does not do a damned thing to address racism, which, by the way, is at its lowest point in American history right now.

Hatred of the police is the one thing that I just can’t square with logic or reason. 99% of police are good men and women trying to help their communities. They make mistakes, and sometimes people die because of those. That will never change as long as there are armed criminals confronting police. But police culture is not inherently racist because of the 1%.

9 unarmed black men killed by police, some justified, some not. 7500 MURDERS of African Americans by African Americans. Where is the hatred for that statistic? Where is Black Lives Matter on this? Where is Nancy Pelosi? (With a screwdriver taking down a 150-year-old plaque of a Democrat House Speaker who once fought for the confederacy.)

Finally, there is the generic hatred going on across the fruited plains. Even my small town has been affected, with the 2018 and 2020 elections becoming bitter, nasty fights, with out-of-town influence peddlers tearing down the good people. In both elections the good guys lost. My slice of Norman Rockwell is now tainted for at least 2 more years with mindless hatred and division.

My Facebook feed is full of bitter hatred from top to bottom. Like a slippery slope, I slide in every other day or so. The new reality is that if you deviate one scintilla from the mob’s orthodoxy, you are instantly vilified in a hostile, vicious wave of hateful criticism. No diversity of thought tolerated. You become instantly hated by people who don’t know you.

But the hardest part is when people who have known you your entire life, who truly know your heart is not dark, spew hate at you just to score points with the mob. I’m reminded of a classic line from Jane Eyre, “If all the world hated you and believed you wicked, while your own conscience approved of you and absolved you from guilt, you would not be without friends.”

Right From the Start: I Just Can’t Stand the Hate was last modified: June 18th, 2020 by Frank McDonough