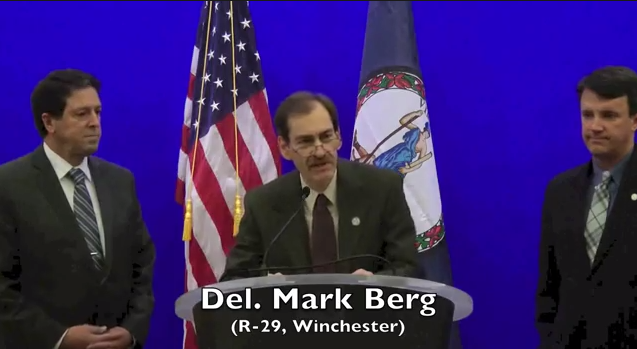 Rights and Wrongs on the Berg Affair

First, some very quick background: Del. Mark Berg (R-Winchester) lost to Chris Collins in a primary for the 29th House of Delegates district. Some of Berg’s former supporters decided to mount a write-in campaign for the General Election earlier this month, encouraging people to write in Del. Berg instead of voting for the Republican nominee. Berg, who also sat on the Republican Party of Virginia’s State Central Committee, declined exhortations to publicly disavow the write-in effort.

The Party’s rules state that if a member of an official committee “allows” his name to be used for a candidate in opposition to a Republican nominee, he will automatically be deemed to have resigned his position on that committee.

Prior to the election, RPV Chairman John Whitbeck wrote a letter to Berg reminding him of this provision, and alerting him to the fact that the RPV General Counsel had advised that the word “allow” meant not just affirmatively giving permission for someone to use one’s name, but also meant not taking some step toward opposing that effort; someone can allow something to happen by facilitating it, or by not taking steps to oppose it. Whitbeck’s letter said if Berg were to merely say in an email to Party officials that he did not support the write-in effort, that would be enough to satisfy the requirement and avoid the automatic trigger. Berg did not take this step and, pursuant to a subsequent official ruling of the General Counsel, was deemed to have resigned his seat on the State Central Committee and, as a consequence, the 10th District Committee.

Del. Mark Berg: He is right to feel badly if he lost in a primary contest where his opponent actively courted Democrats to participate, as has been alleged. But he was wrong not to distance himself from the write-in effort. Even entirely apart from whatever the rule says, this comes down to an issue of Party leadership: when one is a member of the State Central Committee, one had better be able to support all of the party’s nominees. If that can’t be done, then at the very least non-opposition to the nominee must be made clear. In his defense, though, he did not read the rules provision to require him to take any affirmative action. More on that in a the next section.

The RPV Plan of Organization If there is a real culprit here, it is a rule that leaves too much room for subjective interpretation. There are other self-executing provisions where this is not the case. For instance, members of official committees will be familiar with the provision that a member is deemed to have resigned if they miss too many meetings in a row. This is clear, and the trigger is an objective fact. But the term “allows his name to be used” leaves too many unanswered questions. For instance, how does one disallow something if they don’t know about it? (And, is notice of it a requirement?) What steps must be taken to disallow? Whitbeck’s letter to Berg set forth many reasonable options, but these options aren’t set forth in the rule. In the absence of clarity on these questions, who gets to decide the answers? So, while the Plan is right to address what is often a problem after hard-fought primary battles, we as a State Central Committee need to fix this provision to prevent a recurrence of this kind of unhelpful controversy.

Chairman Whitbeck The Chairman was right to encourage Berg to support the nominee, or to at least disavow the write-in effort. And he was right to seek advice of the General Counsel, and to advise Berg the reasonable steps that could satisfy the requirement. That’s what I would have done in his situation. However, in retrospect, I wish he had been less proactive in officially “deeming” Berg to have resigned. I would like to have seen that decision discussed at the 10th District meeting, where it could have been made clearer that Berg could have been reinstated with a simple majority. As it is, I believe the unintentional impression left among many members of the 10th District Committee was that Berg was simply out, and that it was final, and that a successor had to be elected. Some have asked why Chairman Whitbeck didn’t involve himself in other similar controversies elsewhere in the state. I suspect the answer here is that none of the other controversies reached his plate, as none involved sitting members of the House of Delegates and the State Central Committee. Last, while the Chairman was right to publish a piece helpfully clarifying what had been done, I believe he was overly critical of the TBE piece initially reporting on it, and of its author, Jeanine Martin. More on that below.

The Bull Elephant. We’ve provided thorough coverage of this story, and in furtherance of that coverage, Jeanine Martin was on hand at the 10th District Committee meeting where Berg’s successor was elected. In her reporting (which she invited me to edit given that she was on a mobile device at the time), Jeanine described Berg as having been “removed,” before explaining that it was as a function of him being deemed to resign. Jeanine was right that the action achieved the same result as a removal. However, technically it was a resignation. As someone who is very familiar the usage of the word “removal” in the same section of the rules, and someone who should have understood that the distinction could lead to unnecessary confusion, I should have addressed this when editing the post instead of as a later correction.

Finally, TBE was right to provide space for a counterpoint by the Chairman to Jeanine’s original post. We’re open to the free exchange of ideas, and to healthy criticism of what we write. It was in that spirit that I posted the Chairman’s piece, which I took as a critique among friends. However, some among our TBE community have interpreted that as me being critical of my business partner on this. Nothing could be more wrong. Not only did I edit her piece, I understood it to simply be reporting on events as they happened in the 10th, using words that came up at that meeting. I agreed a correction was necessary to make the distinction between “removed” and “deemed resigned,” but do not agree that the piece (which got most of its readership after the corrections were made) did a disservice to the Party or warranted the criticism it received. I apologize for leaving that impression

That’s the last I’ll say about this issue here. Time to move on to selecting a new President.

Rights and Wrongs on the Berg Affair was last modified: November 13th, 2015 by Chad Ochocinco
17 comments