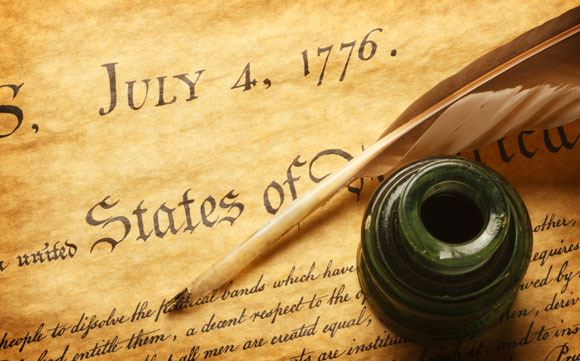 “We hold these Truths to be self-evident, that all men are created equal, that they endowed by their Creator with certain unalienable Rights, that among these are Life, Liberty and the pursuit of Happiness”.   Thus began the Declaration of Independence.

Not too long ago, the truth of this sentence was almost universally debated as the basis for legislative decision making and action.  It was understood that rights belong to each individual and were given by God. When man makes the law, such law could not be independent of the Constitution or the moral foundation inherent in recognizing and honoring God.

However, within the past half century, the concept of God given Rights has been eroded deliberately by the left.  In many instances, the words “So Help me God” no longer end the swearing in of witnesses even in the Halls of Congress.  (When recently asked why the omission, a Democrat Committee chairman indicated that the omission was deliberate, not just a slip of the tongue.)

Today, the God given right of self-defense is under attack.  The Democrat leaders of Virginia’s government have advanced legislation which damages this Right, and they do so with an arrogance that is obvious to all.  The push back has been enormous with counties and cities creating gun sanctuaries and local law enforcement making the claim that they will not enforce State law.

However, the Democrat leaders of Virginia’s government are hiding other attacks on other elements of the Bill of Rights.  While the focus is on guns and the Right of self-defense, the legislation proposed also attacks other rights. For example:

The Right of innocence until proven guilty is being stood on its head.  The God given Due Process Right protects the accused from the arbitrary accusations of the accusers.  However, none other than Congresswomen Nancy Pelosi, the Democrat Majority Leader in the House of Representatives, has stated that “allegations” are sufficient to advance impeachment.  Or, to put it another way, proof of guilt is not needed and the innocent must prove their innocence. Guilty until proven innocent is the new standard of man’s law.

The Right of security in one’s property is also being attacked.  Many refer to the “Red Flag” laws as attacking both the Due Process and Security in Property rights.  (In certain parts of the nation, the government can seize someone’s property through forfeiture law. Trying to get lost property back, and that includes guns, is both time consuming and expensive.)

Probably the worst example of the abuse of God given Rights is the intrusion of the federal government into the overall Rights of the People.  Rather than being limited by the Ninth and Tenth Amendment to the Constitution, the Federal Government, through a massive and growing bureaucracy, has subsumed the Power of the People in ever expanding and overly complex sets of laws and regulations.  It is now to the point where many people think that socialism, which is State control, is superior to capitalism, which is individual freedom.

At this point, the fundamental question of the future of the United States of America has to be considered.  Each generation of citizens has the responsibility to advance the vision of the American founders or lose the Constitution and their individual Rights.  The gun-rights protest in Virginia may be a watershed that advances the concepts of Rights or is just a temporary perturbation in the socialist onslaught against America itself.

As noted in a previous TBE article, “[The] main cause of the ruinous [Russian] revolution — is that Men have forgotten God.”  (Thus warned the Nobel prize winning author Aleksandr Solzhenitsyn.  His words of warning now all too silently echo throughout America. Nevertheless, We the People best not ignore them no matter how difficult they are to hear.)