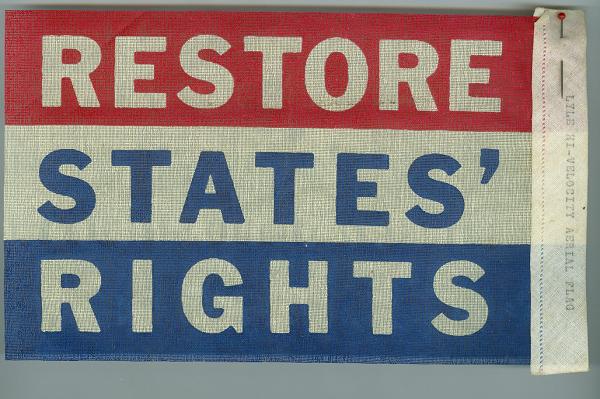 When our Founding Fathers wrote the Constitution and gave us a bicameral legislature, they did so with an understanding that both The People and The States needed to be represented at the federal level.  The people directly voted for their own representative to the more numerous chamber, and then voted for legislators at the State level, who in turn elected Senators to act directly as to what each individual state needed.

During the Progressive Era, do good liberals decided this was counter to the best interests of the people, and thus decided to have direct election of each U.S. Senator instead of having two Senators elected by the each of the United States.  There were several reasons the 17th Amendment was passed.  One of the principal reasons was because in some western states the legislators could not easily decide whom to send to the Senate, resulting in certain states not being fully represented in the Senate.

Senator Susan Collins represents Maine.  Whether I like her politics or not, the fact is that she probably represents the State of Maine quite well.  Maine is a moderate to liberal state which prefers more government interference in our lives.  However there is no way that Arizona and Alaska residents would support such meddling by the federal government in their health care.  Quite frankly, John McCain and Lisa Murkowski (Alaska) are no longer representative of their home states.  To the contrary, if you were to look at their campaign finance filing forms, there’s a good chance you’ll see they’ve both taken a lot of money from the insurance lobby.  And the insurance lobby would benefit the most from a bailout of Obamacare by the federal government.

McCain and Murkowski may be the latest to go against the wishes of their own state, but they’re not the only ones. Look at Lindsay Graham of South Carolina.  Just last week, he said, “The key here is to be fair to the 11 million illegal immigrants starting with the Dreamers…To the people who object to this, I don’t want you to vote for me because I cannot serve you well.”  Does anyone really think that the average South Carolina voter supports amnesty for 11 million illegals?

For the record, Graham has a 45% approval rating in his state.  But he knows that the opposition to him will be fractured in any primary, and thus he keeps getting re-nominated each 6 years, and thus keeps getting re-elected.  He may not be popular with South Carolinians, but is popular with those who profit off of illegal  immigration, aka the United States Chamber of Commerce.  Note in this poll that his counterpart, Tim Scott, has a much higher approval rating.  The list goes on and on.

Having a United States Senator selected by our 60+ Republican House of Delegate members and our 21 Senators in Virginia would be preferable to having big money select Mark Warner or Tim Kaine.  Does anyone really think that after voting for Obamacare Mark Warner would have been re-appointed by Dave LaRock or Ben Cline or Todd Gilbert? Of course not!  Senators would have to do the bidding of the people of Virginia and the legislature – not what Big Pharma or Big Corn or Big whatever you call it wants.

The Progressives thought that letting people vote directly for their own Senators would bring the Senator and the people closer together.  To the contrary, direct voting of the U.S. Senators has pushed them farther apart.  It’s time to get rid of the 17th Amendment once and for all.

I don’t understand the mechanics — how will getting rid of the 17th Amendment ensure the outcome you’re seeking? Isn’t the real objective to quit electing RINO’s?

need to fix the 2nd one first

My only hesitation is that we would have strictly one party representation in the state. Currently, we may have two Democrat senators, but I thankfully have a Republican Congressmen. Not long ago, in addition to our two democrats in the Senate, I also had a Democrat as a Congressman, and I felt like I had no representation all. On the few occasions I wrote to my “representatives”, I (eventually) received a response that meant “Tough luck. I don’t care what you think.”. Oh, yes, the words were a bit more politely worded, but not by much. And the intent was clearly the same. My concerns were completely irrelevant and my questions were ignored. Ridding us of the 17th Amendment might exacerbate this effect.

We know that there is life on the planet Earth. However, does this article bring into question if there is still intelligent life in the Shenandoah Valley?

I would never surrender my right to vote for someone to represent my beliefs, values or concerns to any political party to advance their political agenda.
Wouldn’t this lead to the gestapo party?
The statement keep the people away from the Federal Government is beyond belief?????????
So State political majorities know better?
Change this from “We the People” to We the politically elected.
And the 45% who keep electing Graham is the SC Republican corporate brotherhood just like Va’s weak butt Republicans that nominated Ed¡
Remember gang of 8? Graham lied when he said the illegal would meet the IRS, total lie they protect them and their illegal employment right here in Va yes the Shenandoah too.
The crackhead should never blame the crack.

Huckabee is just trying to help his daughter because evidently she needs all the help she can get to remain as Trump’s personal liar. That’s why he is behind this Senate BS. That’s his excuse.

The guy who wrote this article looks to have went to lunch years ago and never came back……..

I do not fall for all of these little campaign gimmicks that lure you in just because the other part (d) has gone to far for then you are raped (and kicked to “the gutter” SBT)by that party (r) while they seek the advancement of their selfserving hidden agendas.
The Author is saying the elected majority knows what is better for you, nothing less nothing more.
If the Author thinks a State Republican can nominate a Senator to handel the many complicated task of the Fed. maybe they should first exhibit success on a State level.
Clean up the shorline at home first only then they might be able to drain the swamp other wise they are just another reptile looking for a different habitat
( more lucrative ).
End the reptilian relocation project.

Next get rid of the Federal Court System and FBI.
Both Illegal

You think,,,, About time some starts talking about this.

Good article John, several comments:
1. The Senate will never allow this change back to the original Constitution. It will absolutely take a COS to kill the 17th Amendment.
2. America needs to come to the realization that ALL elections are state elections. Even when we vote for the President we are really electing party delegates to the Electoral College. We have bought into the liberal mistake that because we are electing Senators and Representative to a Federal position it is a Federal Election, It is not. That is why up until the Civil RIghts Act that began Federal Control over “Federal” elections, any change to the states’ ability to run elections had to go thru the Amendment process.
3. Any appointment by the State Legislatures should be limited to one 6 year term and the salary and benefits for those two offices, including staff, should be paid for by the state.

4. Pies shall be required to be in the sky.

Not pie in the sky. More like a vision about how America should be and unwilling to accept the BS that passes for governance today.

I agree. It is time to assess the situation. Senators all too often start out as representative of the party in power and then find a way to survive election after election regardless of state interests and party interests. I hope Trump strips away some perks to make a point.

You do understand amending the constitution requires a 2/3 vote in the senate, correct?

Never said it would be easy. But this must be done

All politics is local. You have to fix the local politicians first. Otherwise you go through all the trouble nationwide to get rid of the 17th only to find out the same people are selecting the senators as before the repeal. Currently you only get to vote for the candidate they select/fund. Why would it change just because you no longer vote for a senator? Reform the parties, reform the process. Neither state’s rights nor voter’s rights exist under the current system.