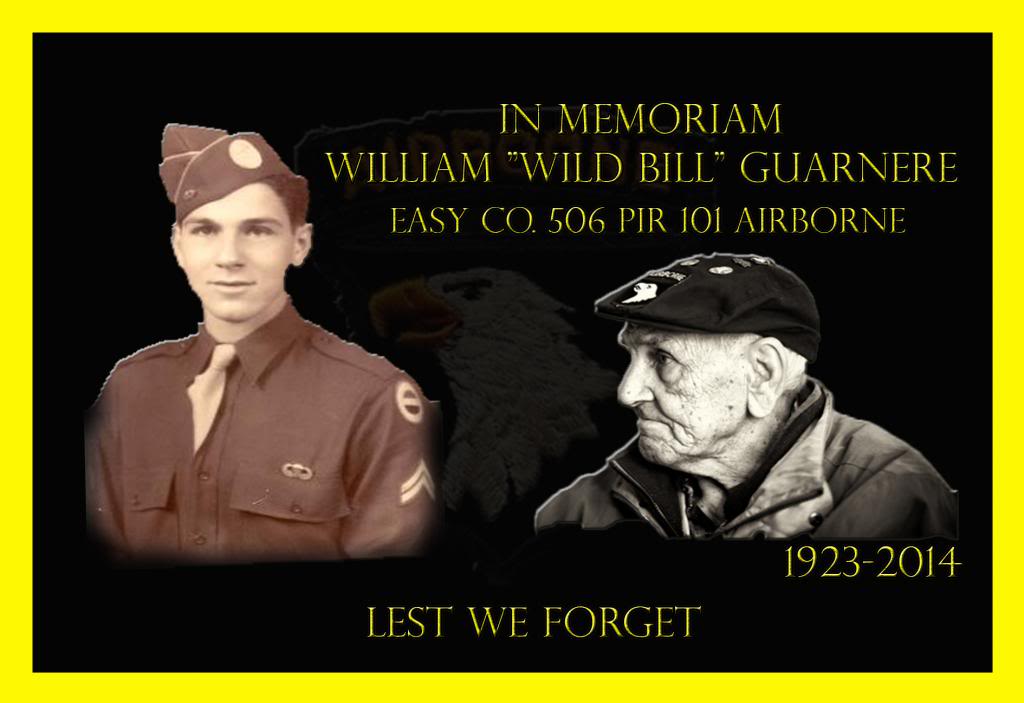 Four years ago this week, one of the last of the original Band of Brothers – Platoon Sgt. William Guarnere left us to go home to be with the Lord.  He was 90. Guarnere was an original member of Easy Company, the famed members of Company E of the 506th Parachute Infantry Regiment of the 101st Airborne, made famous by the Stephen Ambrose and then Tom Hanks miniseries – Band of Brothers.

Guarnere was a high school dropout working for a regional locomotive and Army tank manufacturing plant when the Japanese attacked Pearl Harbor.  Guarnere wanted to join the army after hearing of the attack on Pearl Harbor, but took orders from his mother – and they made a deal. He would go back to school, work the night shift at the locomotive plant, and then could join the US Army.

Guarnere was one of the 1st members of Easy Company of the 506th PIR.  He was known to his comrades as Wild Bill for his battlefield prowess.  As Easy Company Historian Jake Powers stated: He (Guarnere) was one of the best combat leaders not only in his company but also in the entire division (101st Airborne).  If there was a fight going on with the 1st platoon or 3rd platoon, Bill would miraculously show up and leave 2nd platoon to go help.  He would march to the sound of gunfire.  He had no reservations and was just a fearless man in combat”.  The night before D-Day, Guarnere found out that his oldest brother Henry had been killed by the Nazi’s at Monte Cassino.   On D-Day, Guarnere was part of a contingent of Easy Company which singlehandedly took 4 German artillery pieces which had been raining fire on the Allied forces trying to take Normandy wiping out an entire company of German soldiers and suffering few losses.   Guarnere received his first Purple Heart in mid October 1944, and because he so loved his fellow soldiers, tried to sneak out of the hospital to get back to the front. An officer saw what Guarnere was doing and demoted him to private, and made Guarnere face a court martial.  Guarnere said that he could care less, and that if he was left in the hospital, he would only desert again to get back to his comrades. He was restored to his rank of Sgt. and went back to Easy Company and the court martial was dropped.

Guarnere lost a leg at the Battle of the Bulge, and during his 6 months in continental Europe, was awarded the Silver Star (Brecourt Manor on June 6, 1944) 2 Bronze Stars, and the Purple Heart.  After the War, Guarnere was one of the leaders of the 101st and Easy Company alumni, and is one of the major reasons that history has gotten to know Easy Company.  Powers believes that Guarnere was the glue that kept the legacy of Easy Company alive, stating “The heavy lifting that Bill did after the war kept all these men together”.   Guarnere didn’t let him being an amputee get in the way of having a good life, as he married his then girlfriend Frances. They had 2 children, 9 grandchildren, and 14 great grandchildren.

Guarnere suffered horribly during his time in Europe but never lost a sense of humor about it.  During the documentary part of Band of Brothers filming, when the aging veterans were in Bastogne, Guarnere went to fellow veteran Babe Heffron and yelled out “Hey Babe look – it’s me leg”!  All of the remaining vets had been somber before that moment, but busted up in laughter after Guarnere’s statement.

Guarnere was honored by the Pennsylvania Governor with a half staff order.  RIP Wild Bill.

For all of its horrors, it was WW2 that allowed Italian-Americans to enter the American mainstream. As a result of their bravery and camaraderie on the battlefield, Italian American soldiers such as “Wild Bill” were able to shatter the ugly stereotypes of the Mafia hood or the “olive oil greaser” that had plagued Italian Americans for over a generation.