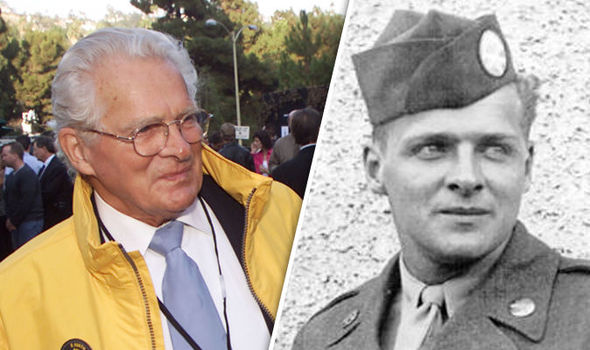 While our hearts go out to the victims of the Las Vegas shooting and to all of their families, I want to take a few minutes to recognize and honor an unsung American hero, one of the last living members of Americaâ€™s Greatest Generation. Â Sgt Donald Malarkey, who passed away a few days ago at age 96. Â

Malarkey and the stories of the Greatest Generation were finally told in the Stephen Ambrose book Band of Brothers, and then brilliantly brought to life by Tom Hanks and HBO in the miniseries which shared the name of the book. Â Sgt. Malarkeyâ€™s life is so typical yet so unique to the American story. Â After the bombing of Pearl Harbor, Malarkey wanted to be a Marine, but could not qualify because of a dental issue. Â He then tried out for the Air Force but did not have the necessary math skills. Â So Malarkey, wanting to be among the best of the best, learned about the paratroopers, a new form of infantry, and joined up with the 101st Airborne. Â The paratroopers were the elites of the US Army, with only one in six who tried out getting their jump certification. Â Malarkey received his certification in 1942. Â

Jumping into France behind Nazi lines the night before DDay, Malarkey and several members of Easy Company of the 506th PIR (Parachute Infantry Regiment) were under orders to take a series of German artillery. Â Remember that a full company of infantry at the time was 160-175 soldiers. Â At the time because of problems with the jump, Easy Company of the 506th PIR only had about 25 soldiers who were available to take the guns. Â Under the leadership of then Lt. Dick Winters, Malarkey and Easy Company took all 4 of the German guns, ensuring that the Americans could link up Omaha and Utah beaches and thus continue landing troops at Normandy. Â The tactics used by Lt. Winters, Malarkey, and the remnants of Easy Company on how to take a fixed position are still taught at West Point to this day. Â

Malarkey fought on the front lines longer and for more straight days than any other member of Easy Company of the 506th PIR. Â He was there every day from June 5 through the end of the war. Â Malarkey fought for 23 days at Normandy, 80 days in the Netherlands, 39 while being surrounded by the Wehrmacht at the Battle of the Bulge, and then another month at Heguenau France, was there at the last gasp of the German army in the West, witnessed the liberation of the prisoners at Kaufering IV, part of the Dachau concentration camp network, and was part of the group who captured Hitlerâ€™s Eagles Nest at the very end of the War. Â At the time, the US Army had done a very detailed study of combat and how combat affected the average soldier. Â It was an understood thing that after 110 days of combat, the average soldier could no longer function. Â Yet Malarkey spent about 170 days on the front line- never being out of the thick of the battle. Â 50% longer than the average man could stand. Â Malarkey was a manâ€™s man. Â A true soldier. Â An American hero. Â And yet unknown to history until HBO and Tom Hanks and Ambrose worked together to tell the story of the men of Easy. Â

For his bravery, Sgt. Malarkey received (among others too numerous to list) the following medals:

Being on the front lines for such an extended period of time took its toll on Sgt. Malarkey who likely suffered from PTSD later in life. Â But that did not stop this member of our Greatest Generation from being an outstanding citizen â€“ in 1954 Malarkey became the County Commissioner of Clatsop Oregon (similar to a Chair of the Board of Supervisors), and worked for conservative causes, lending his name to the 2005 campaign in Oregon to repeal their real estate tax. Â Sgt. Malarkey also gave of himself to Iraq War veterans to help them return to life after combat. Â

Sgt. Malarkey had a life of service to his fellow Americans. Â He served his country well in WWII, and his native state of Oregon afterwards as a member of the Republican Party. Â His feats of heroism and in a couple cases of abject stupidity (Note episode 2 of BoB where he rushed a group of dead Germans trying to find a Luger pistol only to realize it was a leather covering instead â€“ nearly getting himself killed) are legendary yet so typical of his generation. Â Malarkey made peace with his life when his story was told, coming to terms with the horrors he had seen, inflicted, and witnessed.

RIP Malarkey. Â A simple tribute for a simple yet great American. Â

Good article, John. Just one minor comment. There was no Air Force in 1942. It was the Army Air Corps. The Air Force was created after WW2 so that lazy pilots would not have to take the Army PT text. :>) Airborne all the way!

I’ll yield on this, it was the Army Air Corps