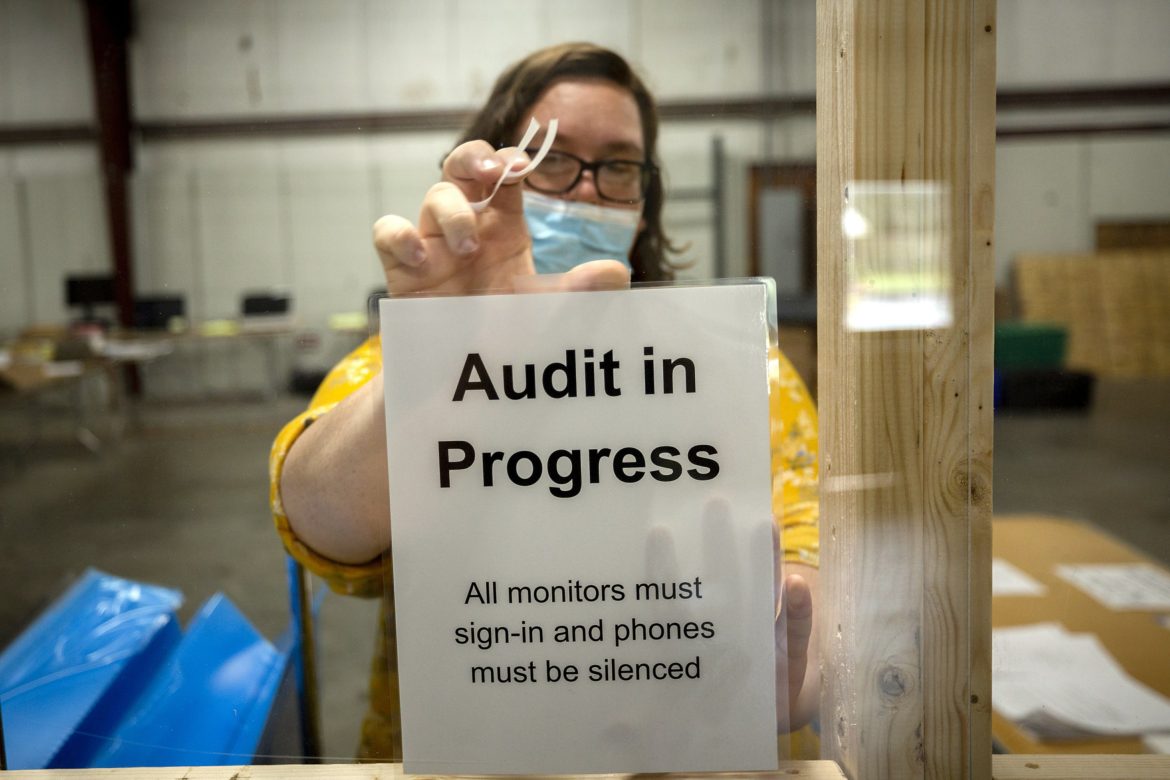 Under Virginia law (§ 24.2-671.1), the Department of Elections (DoE) has to “coordinate a post-election risk-limiting audit annually of ballot scanner machines in use in the Commonwealth.” This year’s audit took place a week ago. I wish I could say it accomplished what the law requires.

The audit method used would seem a little strange to most people. Of the nearly 4.5 million votes cast for President last November, the company conducting the audit, Voting Works, decided to audit 1400 ballots across the state to determine the accuracy of Virginia’s election. That represents .0003 (three ten thousandths) percent of the ballots cast. Voting Works was very scientific in the way they went about choosing the 1400 ballots. For example, the locale I observed had to choose fourteen ballots from the more than 35,000 that were cast. And the Registrar could not pick just any random ballot. Her team was told to unseal the ballots from specific precincts and pull out of those boxes a specific ballot or two or three. The numbers varied with each specific precinct.

Thankfully, instead of having to count down to ballot number 3666 (in one case), the state provided a scale. The tellers weighed 100 ballots, then divided the weight by 100, and got a fraction of a gram. That weight was the average weight of a ballot. The tellers then multiplied that average weight by the number of each of the ballots they had to pull. When that exact weight showed on the scale, they took the top ballot and declared that to be the number ballot that they were supposed to audit.

Granted it is hard to imagine that auditing such a tiny number of ballots will produce any kind of meaningful results. But this is statistics. In the process of earning my doctoral degree, I took four statistics classes and a research design class. Voting Works created a truly impressive method of gathering the sample of ballots they wanted, but there were several flaws in the actual process.

I do not mean that the individuals working at the audit station I observed did anything wrong. They followed instructions to the letter. The problem is with the methodology of the survey. Granted a researcher can learn a lot from a survey with a small sample, but the smaller the sample, the greater is the chance for error. The DoE and Voting Works claim that the statistical chance of the November ballot count being wrong was some miniscule number. Certainly no one has shown proof that the election results were in error, but the statistical chance that errors exist in the audit results is larger because of the small sample size.

Also, when the precinct workers pull the paper ballots out of the ballot counting machine on election night, they place the ballots in a box in no particular order. (I know this because I have been a chief election officer for a number of years.) Also, some of the boxes into which some precincts placed their ballots were over-sized. That means the ballots slid around inside the box like cards being shuffled. The whole “pull out a specific ballot number” operation sounds scientific, but it means little in reality because the ballots were never in any particular order in the first place.

Statistics have to be interpreted. Most people don’t know enough about statistics to be able to interpret the numbers, so they have to rely on statisticians to do so. The first adage of statistics is “You can make statistics say whatever you want them to say. It’s all in how you interpret them.”

The bigger issue is that this audit did not do what the Code of Virginia requires. As noted in the first paragraph of this column, the audit is supposed to be “of ballot scanner machines.” This audit did not do that other than peripherally. It is possible to program ballot scanner machines in a way that allows one candidate to get 1.25 votes per ballot while another candidate might get only .75 votes for a ballot. It is also possible to keep that miscount from happening until after the first 100 ballots are counted. If that is done, then the standard verification process of running five or so ballots through each precinct’s scanner to prove its accuracy is likewise meaningless.

The DoE needs to do a better job of complying with the law as written and showing that the ballot scanner machines are accurate for every ballot they count. That is a MUST step if the DoE wants to remove the concerns that a large percentage of Virginians have about the accuracy of elections in the Commonwealth.