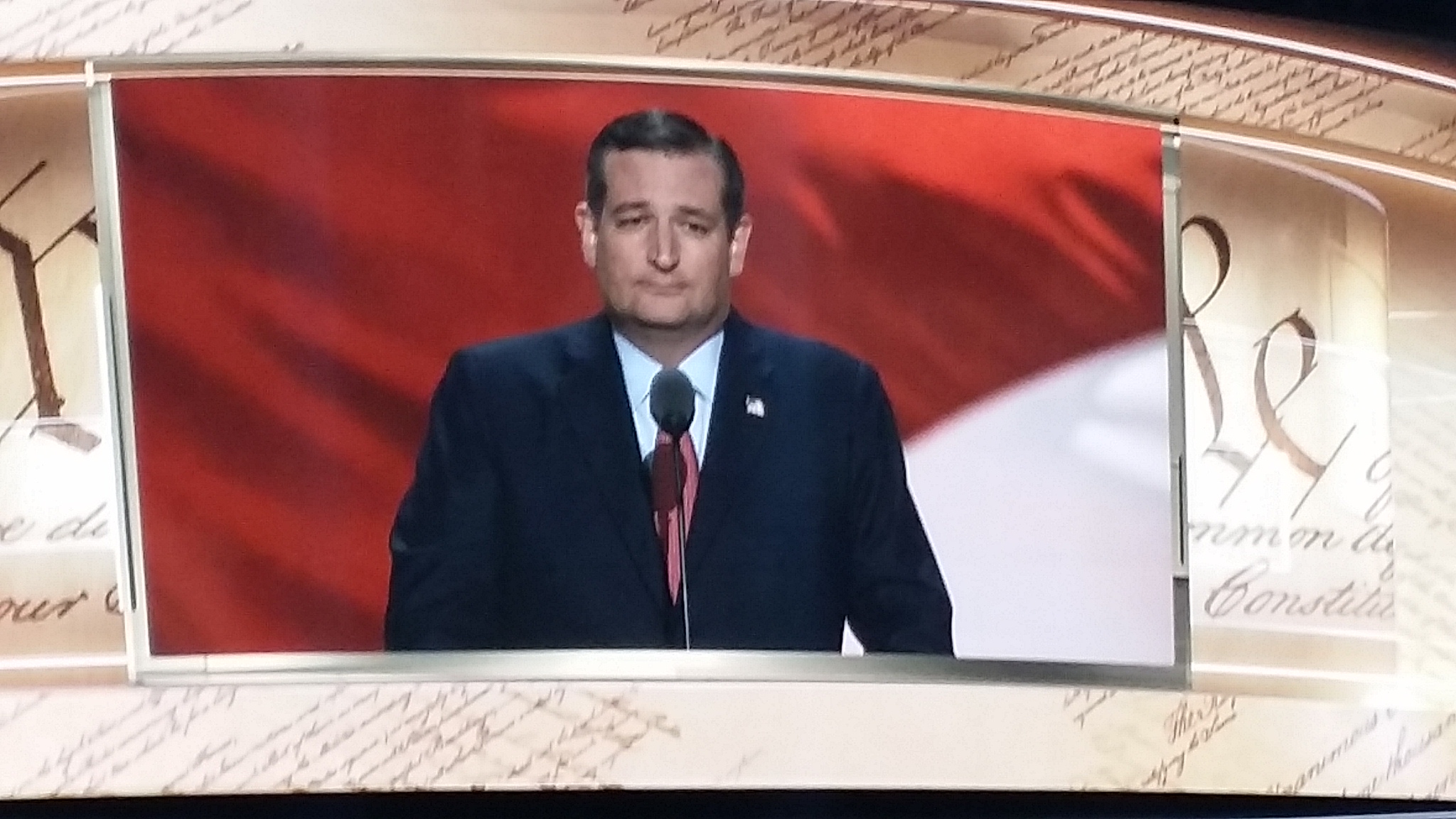 Day 3 of the Republican National Convention is usually all about the Vice Presidential candidate’s speech, introducing himself to the nation and making the case for the ticket, however, this year has definitely not been a typical election year, and the only thing anyone wants to talk about is Ted Cruz’ speech.  Before we get to that, though, there was quite a lot of other things to cover.

Our day started with a great speaker at our delegation breakfast.  Former UN Ambassador John Bolton came to talk to us about radical Islamic terrorism and Hillary’s failure as a Secretary of State.  He gave quite a speech and kept the room riveted. 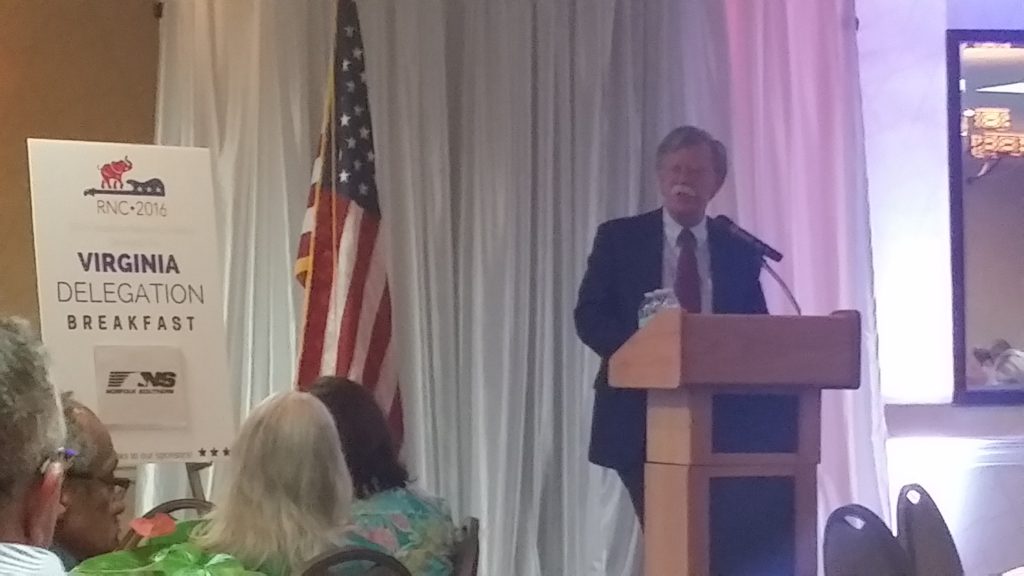 Afterward a number of us went to a thank you event for Ted Cruz down by the waterfront.  There were thousands of people standing in line to get into the event which was standing room only.  Cruz gave a nice speech thanking all the people that worked on his campaign.  At one point Ted Cruz said, “now we have a nominee,” and at that very minute Donald Trump’s plane flew by, coming in for a landing with the giant “TRUMP” emblazoned on the side.  Ted laughed and said, “I couldn’t have timed that better if I tried.” 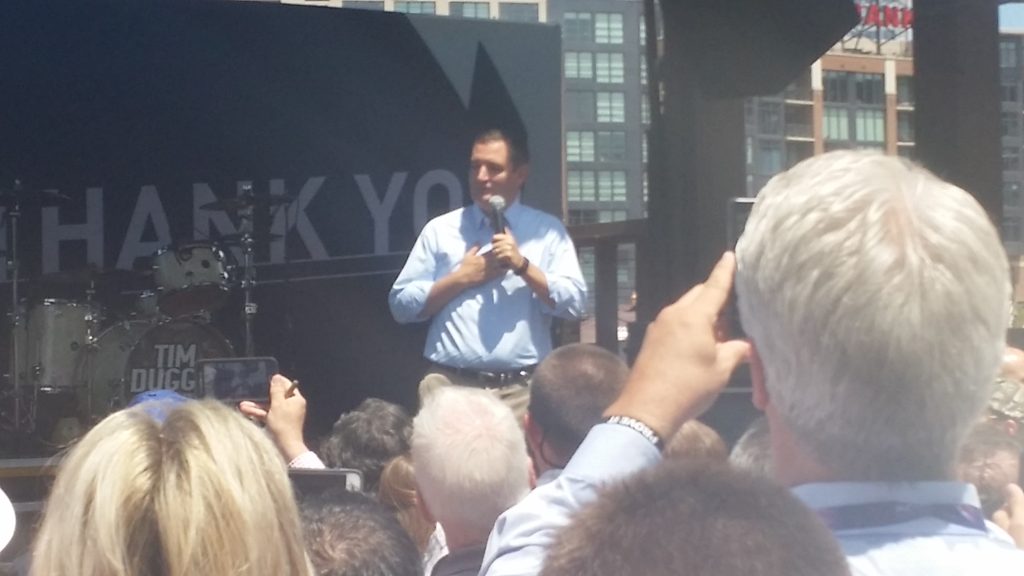 Afterward it was back to the hotel to clean up and get ready for the nights speeches.  Laura Ingraham started the night off with a bang, making the case for Trump. 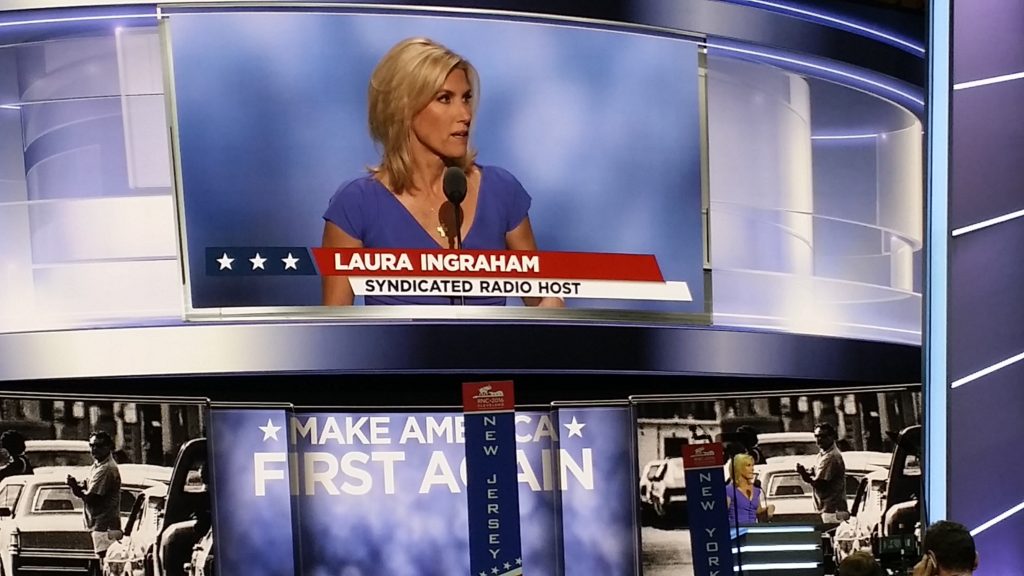 Throughout the last two nights, former Loudoun Supervisor Eugene Delgaudio has done an amazing job getting as many Alternates and guests a chance to spend some time on the floor and to get out of the cheap seats our guests have been sitting in.  Seeing that orange hat going up and down the stairs was a familiar sight all night. 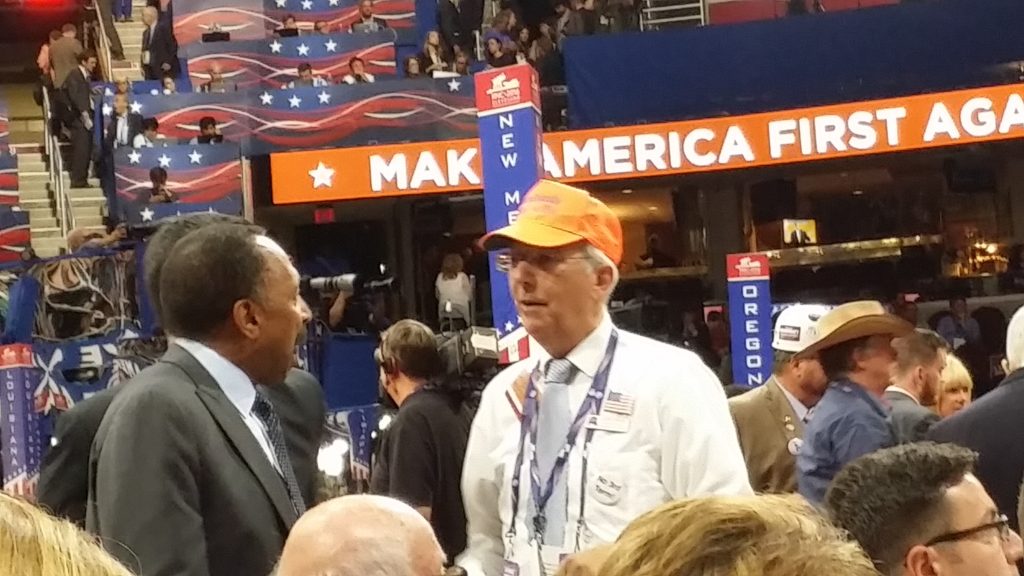 Next up was Wisconsin Governor Scott Walker who made the case against Hillary Clinton ever setting foot in the White House again with a speech who’s theme was “American Deserves Better than Hillary.”  So very true. 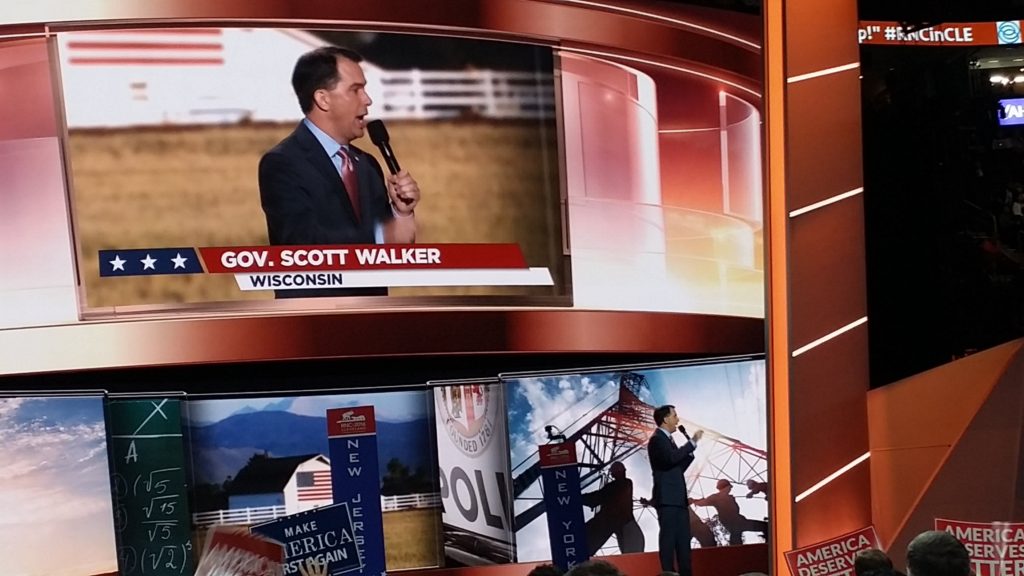 Finally, the stage was set.  It was time for the speech everyone was waiting for.  Senator Cruz came out to great applause and for the first two thirds of his speech wowed the audience with a passionate speech about life and liberty.  There were a few sour moments during his speech, namely when GOP floor leaders were whipping people in the audience to start chanting, “Trump! Trump!” multiple times while Ted was trying to speak.  A delegate from Arizona told me later that a friend of his who was serving as a floor whip for the convention, took off his official “whip” hat, refusing to do it.

Ted implored people around the country not to stay home on election day, and everyone in the audience waited with anticipation.  Would he endorse? He then told everyone to vote your conscience for candidates up and down the ballot for candidates that you believe will defend liberty and the constitution, and it was at that moment that the crowd began to split.

Cruz supporters were a mixed bag of emotions.  Some were sad that he didn’t endorse and support the ticket.  Others were happy that he stood strong for his principles.  All were surprised at the wording he used.  The phrase, “vote your conscience” this week has been almost like a dog whistle for people on both sides, as that was the phrase all of the “free the delegates” and “delegates unbound” people were using.  My feeling was that if Ted was going to give the speech he did, he could have at least said, “vote for freedom” as freedom had been the main theme of his speech the entire night.

Trump supporters lost their minds.  They began to heckle Ted, and interrupt him.  Angry Trump supporters advanced on Ted’s wife Heidi, who was right behind the VA delegation, in a threatening way and she had to be escorted out of the convention.  In the end Ted was met with resounding boos when he finished, and left the stage. 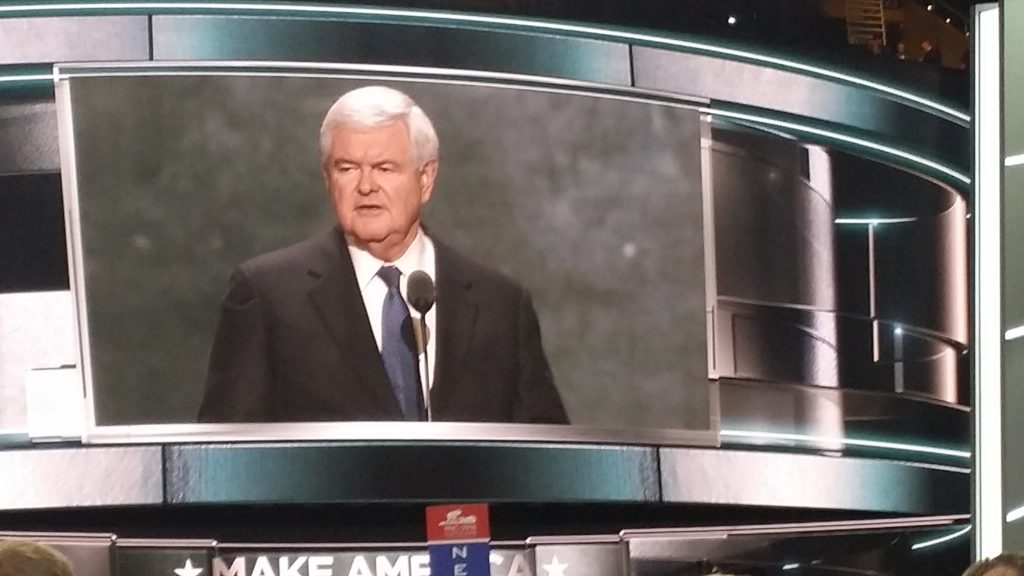 There has been speculation about whether Trump knew that Cruz was not going to endorse him ahead of time, with the Trump campaign saying they knew all along but let him speak anyway.  Others are saying that Ted promised to endorse Trump but then broke his word.  Sensing that Newt was going “off book” from his speech I was able to grab a shot of the teleprompter during this section of the speech and this is what was there, which clearly did not match what Newt said. 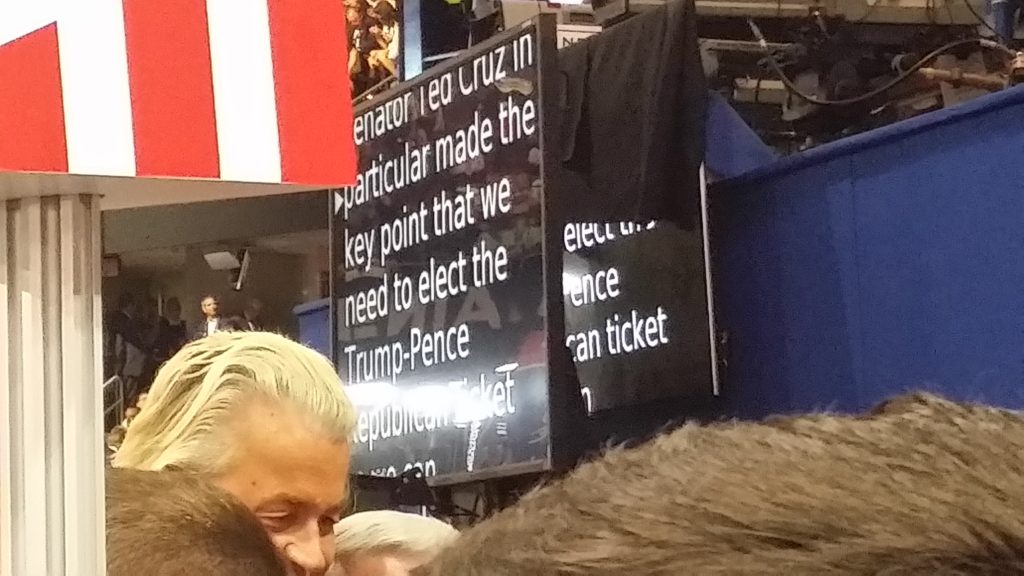 I admit that I didn’t stay to hear the speech by Governor Mike Pence.  Given the fact that Ted Cruz had stolen his thunder, and sensing a mood in the crowd, I decided to go get my mother, who is my guest at the convention, and head for the buses to take us back to the hotel.  It was a good thing, too, because as we got to within about 50 yards from the buses the Homeland Security team stopped everyone from going any further.  We were told that there was a VIP they were waiting to get through the area and so we were delayed, and the crowd behind us got bigger… 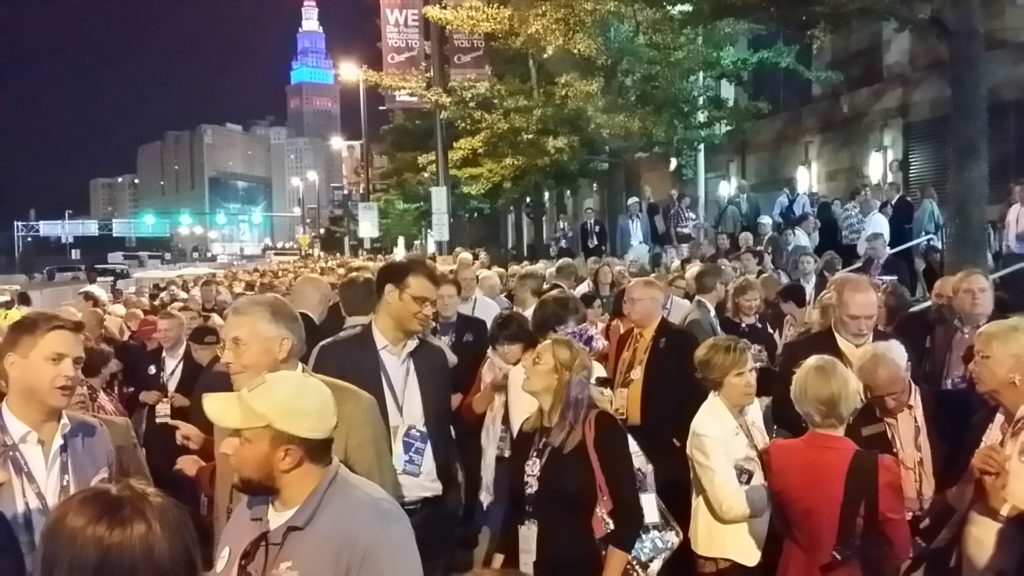 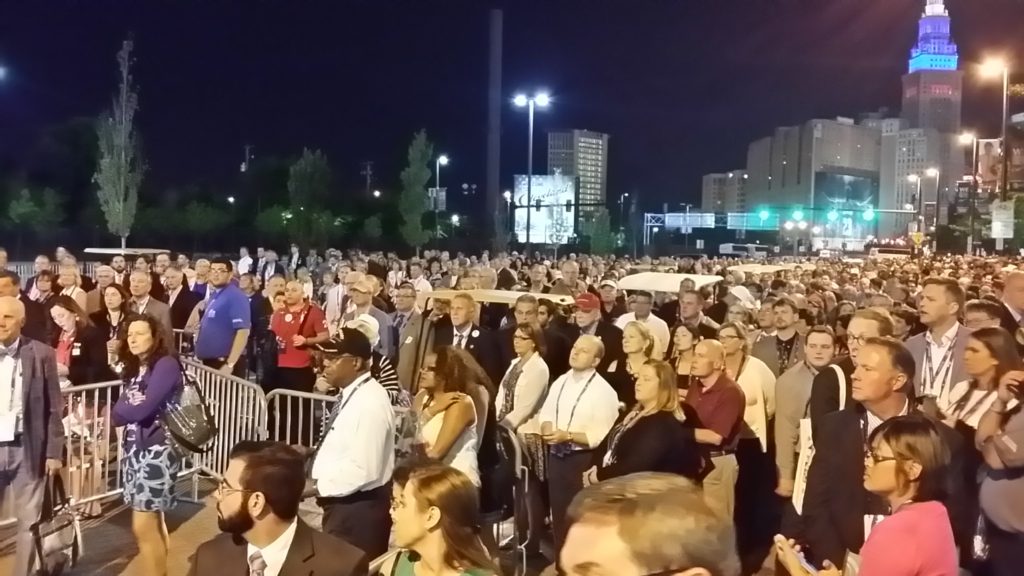 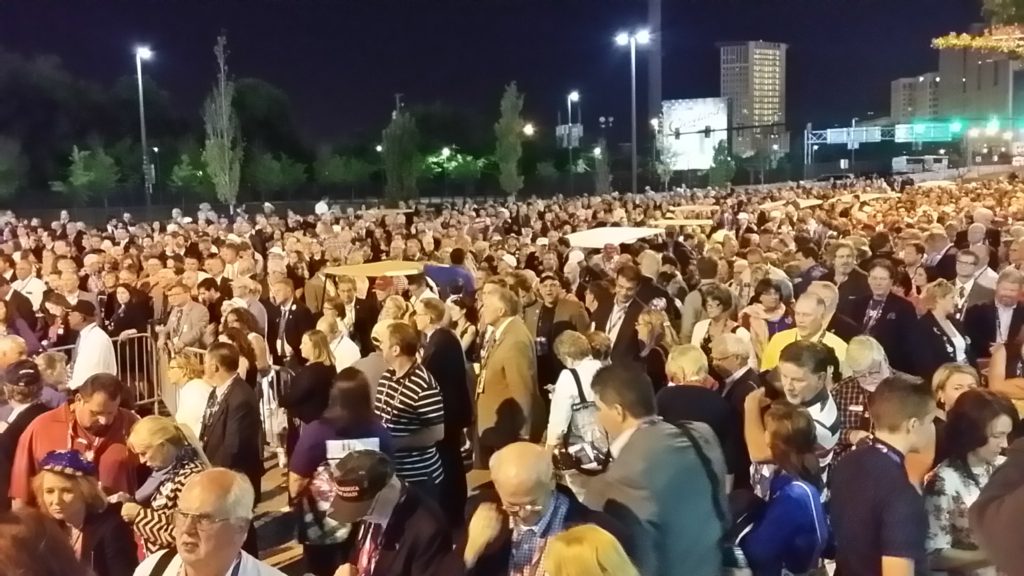 For me I will just say this.  I find it interesting that we say we want politicians who stand for what they believe in and will fight for those values and those principles, even at the expense of their own career.  Yet when Ted Cruz did exactly that last night, he has been roundly criticized for it.  Whether you love him or hate him, whether you agree with him or disagree with him, Ted Cruz walked onto that stage and stood for what he believed in, knowing he would be booed, knowing he would disappoint some of his own most committed supporters, knowing that he could be ending any hopes of ever becoming President or even getting re-elected to the Senate.

Some say Ted was only thinking about himself and his career.  I think the opposite.  In the eyes of many he has hurt his career, possibly even doing it irreparable harm.  The easy thing to do would have been to say he is voting for Donald Trump.  The hard thing to do was what he did.  It is never easy to stand up for what you believe in.  If it was, everyone would do it.

For myself, I view Ted’s speech last night as both a challenge and an opportunity.  Ted Cruz never said not to vote for Donald Trump and he certainly didn’t say to vote for Hillary.  He said to “vote for candidates up and down the ticket who you trust to defend our freedom and to be faithful to the Constitution.”  It is now up to the Republican Party to prove to the people that we are indeed the party that stands for freedom and the Constitution. It is up to each and every candidate running on the Republican ticket, including Donald Trump, to prove that they know what is at stake and will keep the promises they have made on the campaign trail.  It is that skepticism of the level of commitment our party and our candidates have shown in the past to keeping their promises that have so many people struggling with uniting behind Trump.

The brilliance of Trump, he gave Cruz the rope, and Ted hung himself. I used to think people of DC couldn’t stand Cruz because he claims to be conservative, but now I get why they despise him.

Rockefeller pulled the same stunt in ’64 after Goldwater beat him. Not a role model of Cruz that he has talked much about.
The most inept campaign of all time.

So Mick, do you support the nominee of the GOP, Donald J. Trump?

Since Cruz’s speech had been vetted, why didn’t Newt get the memo?

Cruz was scheduled for 9 minutes, he went for 22.

Charles Krauthammer said it best about Cruz speech at the convention,”Cruz read the longest suicide note!”

Trump was magnamanious in allowing Cruz to speak and instead of being gracious Cruz stabbed in him in the back! Cruz once again lied about supporting the nominee. Cruz is so self absorbed and a narcissist!

Way to go winning the Cruz supporters over to your side. I’m sure they’ll be jumping at the chance to support Trump now.

Cruz supporters are welcome and encouraged, I have heaps of scorn for the Nevers. No room for that crap in the GOP.

We don’t have to “win” you to our side, it is up to you to get up off your duff, quit whining and get behind the nominee. The people working to save our country are beyond tired of Cruz whiners. TRUMP IS THE NOMINEE, whether you like it or not. Get on the train or get left behind, in this case it is a plane.
http://www.thegatewaypundit.com/2016/07/north-carolina-gop-chairman-cruz-delegates-find-way-home/