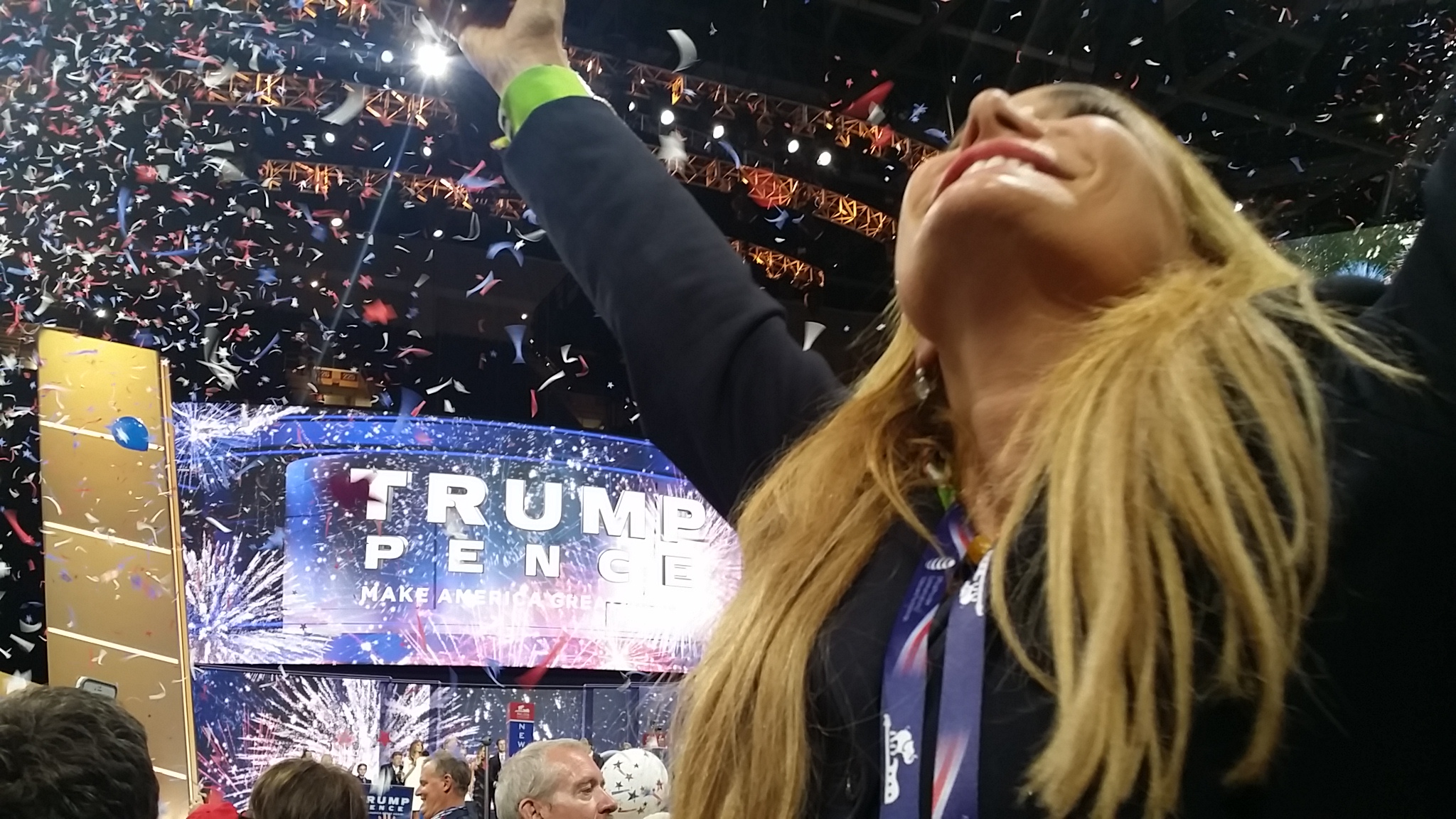 Forgive the delay in posting this, but we got in very late Thursday night and I spent all day Friday on the road driving home.

Our last day in Cleveland started with a little star power in the form of Ben Carson and Congressman Louie Gohmert (R-TX) who were there to speak to our delegation breakfast.

First was Ben Carson who talked about the need to come out and vote for Trump. 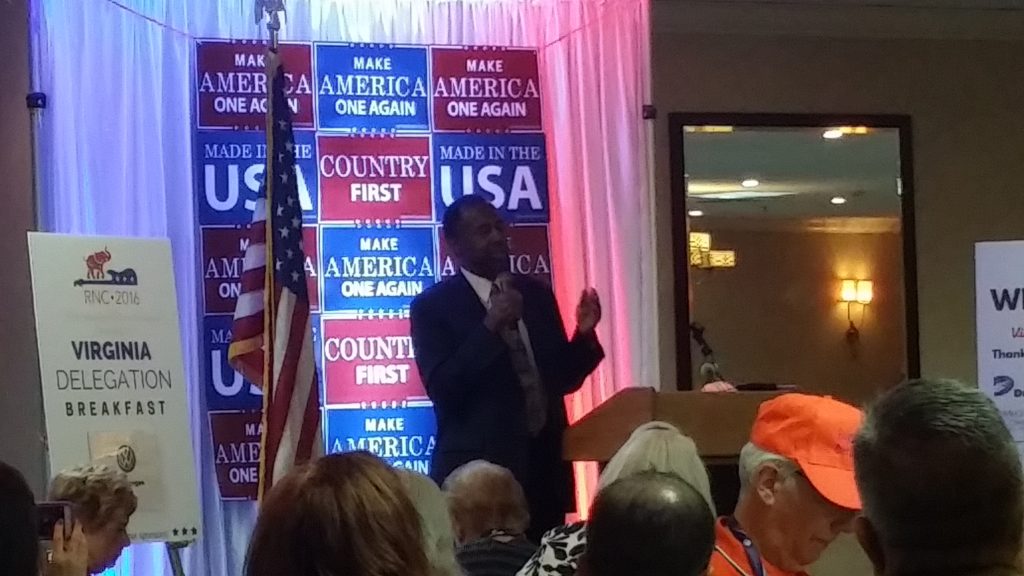 Then Congressman Gohmert spoke and focused his talk on the way the Democrats are always breaking the rules. 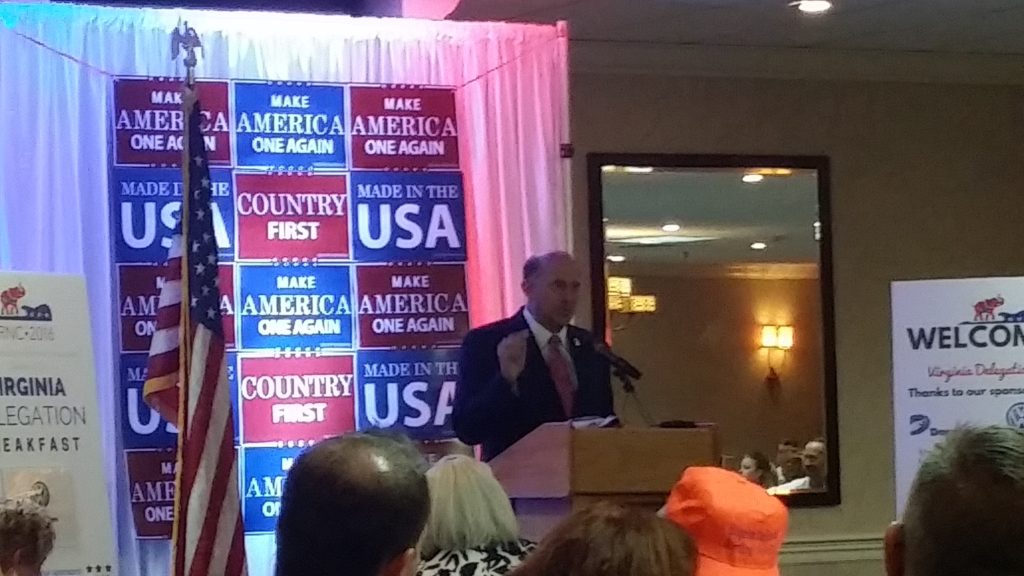 After breakfast it was time to clean up and get ready to head downtown. We had a reception sponsored by Budweiser that afternoon and everyone was eager to get moving.  All we needed were some buses. Luckily the folks at MENSA decided it would be a good idea for men and women who were trying to dress up nice on the off chance they might be on TV to ride windowless trolleys down the highway at 70 miles an hour. #FAIL. 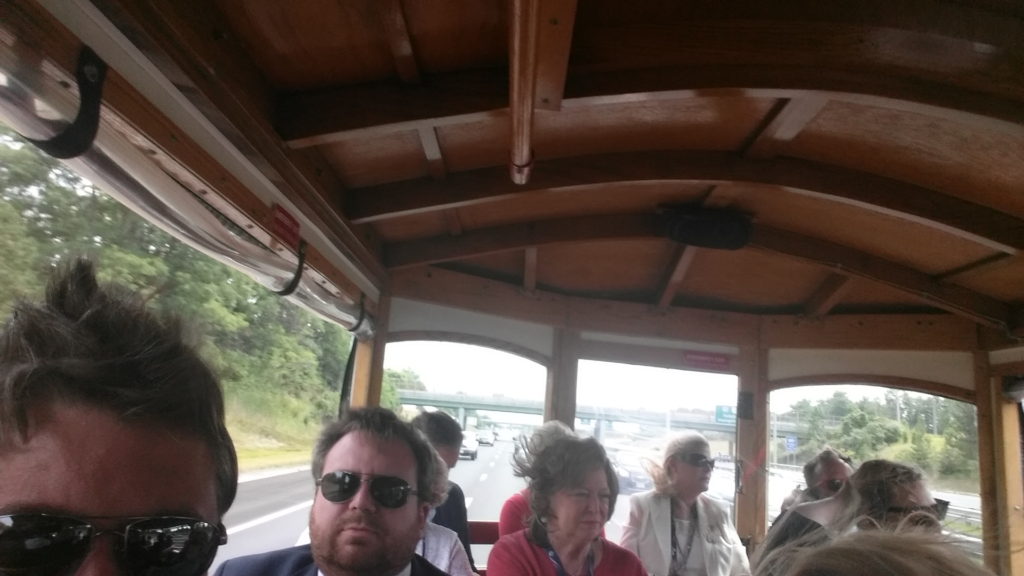 After the reception we headed over to the convention center to start off the night’s speeches.  The night started off a little rocky as news got out that someone had leaked Trump’s speech, along with a handful of others, to a Democrat Super-PAC which released them to the press. Coincidentally, the schedule of speakers got jumbled up with some being left off and others being moved around.  Oh, and there was this guy at the beginning of the night.  Gotta love unity. 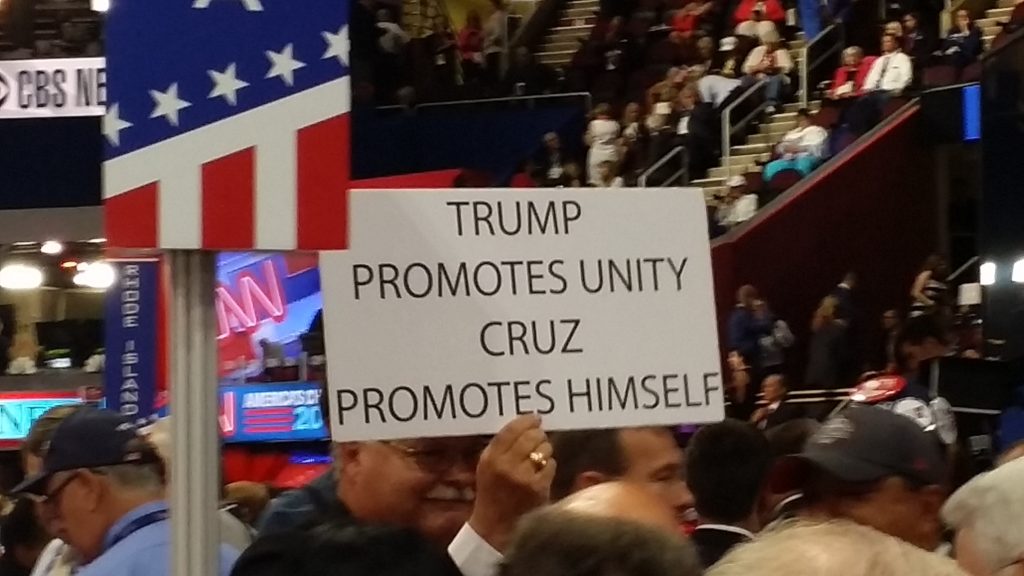 During slow points in the program, they would either play music or they had a live band playing to keep the crowd fired up.  Former Alexandria Vice-Mayor Bill Cleveland definitely got into the swing of things. 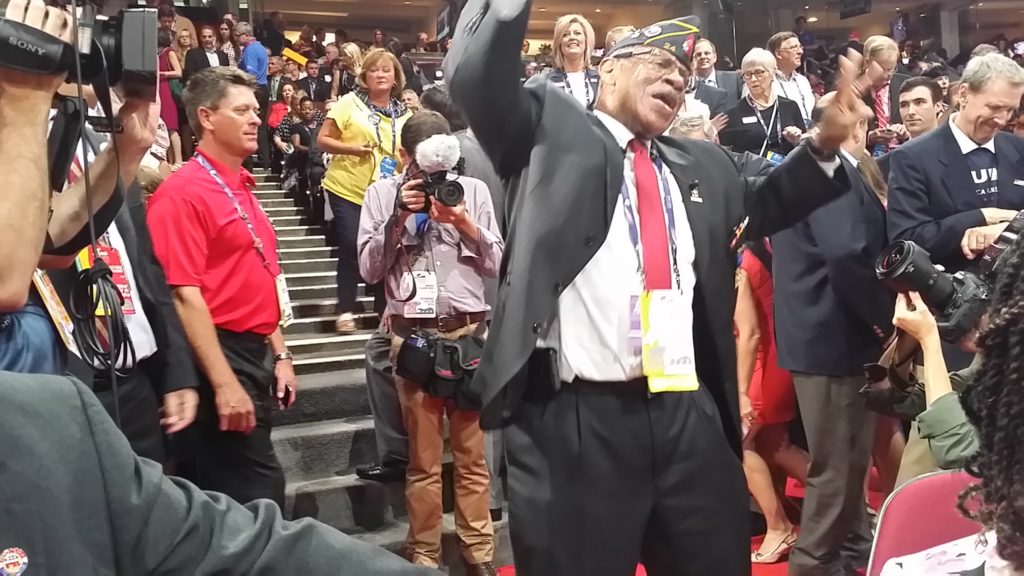 The list of speakers Thursday was much shorter than other nights, as there was less time to have to fill and more time they wanted to devote to Trump and his daughter Ivanka.  Nevertheless there were some interesting speakers on the night.  Arizona Sheriff Joe Arpaio talked about the economy and repairing critical infrastructure….just kidding. Of course he talked about THE WALL. 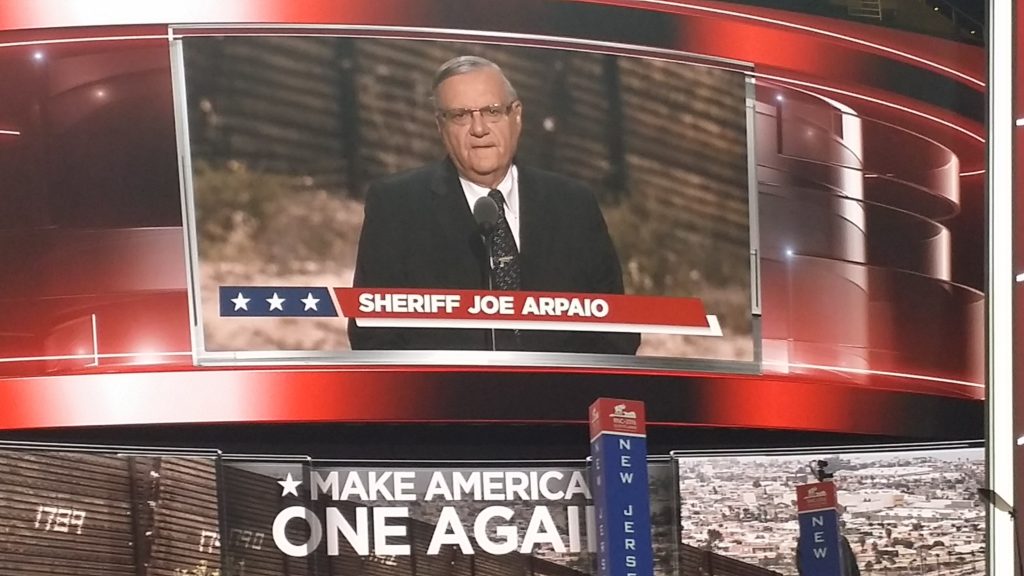 Jerry Falwell, Jr also spoke and made the evangelical case for Donald Trump.  For some reason, Jerry didn’t give a shout out to Virginia. Not sure why. 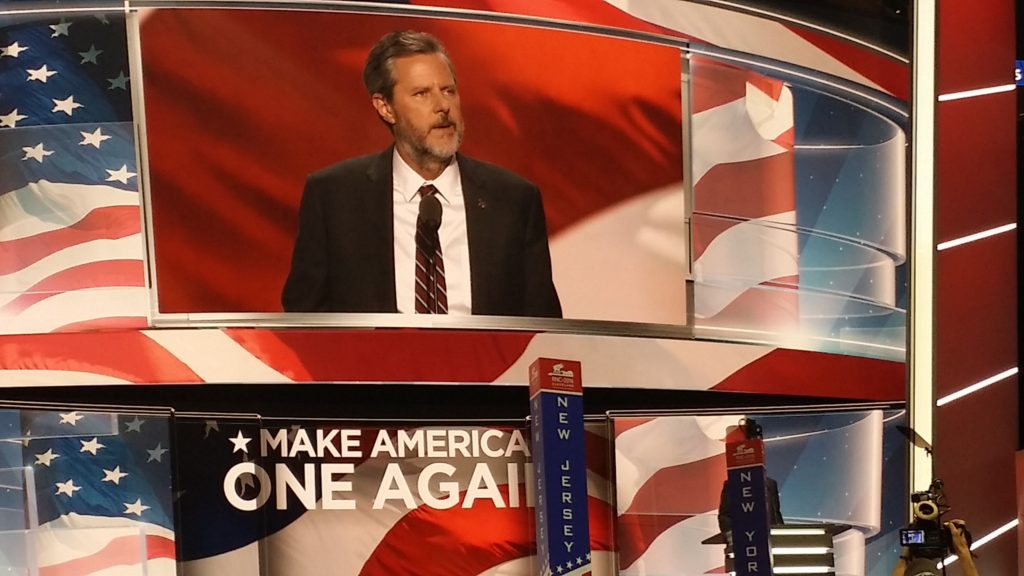 Of course, soon after Falwell spoke Peter Thiel, the openly gay co-founder of Paypal, got up to lecture the crowd about why we should ignore the Republican platform’s social conservative planks and give up what he called “fake culture wars.”  Paypal, you may recall, is boycotting the state of North Carolina over it’s policy of keeping men out of the girls bathroom.  Can you feel the love yet, Conservatives?

A little later on we started to get to the main event.  Ivanka Trump came to talk to the crowd with a slightly different speech.  She talked about how she doesn’t consider herself a Democrat or a Republican, and that she, “votes for the person, not the party.”  It’s almost as if she said she…votes her conscience… 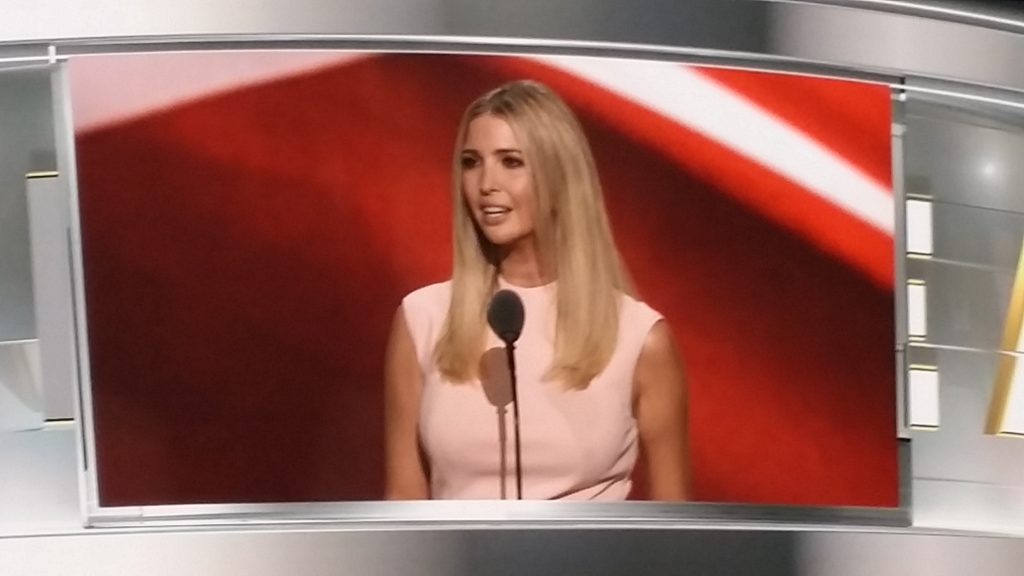 Nevertheless, she did her best to give her father a good lead in, and then introduced him to a roaring crowd.  I don’t think most of the networks showed the jumbo screen when he came out, but this was what they had up there.  Yeeeaaahhh….nobody’s compensating for anything here… 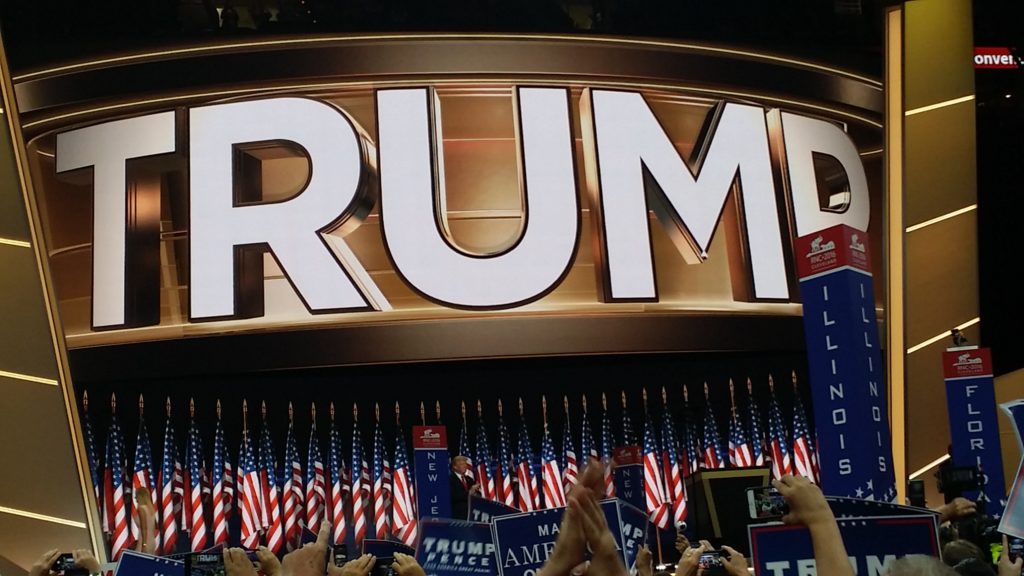 I was eagerly anticipating Trump’s speech.  I mentioned in my day 3 recap that Trump had the opportunity to reach out to conservatives that were still struggling with supporting him.  He had the chance to try and bridge that gap and show why he could be a leader conservatives could trust. 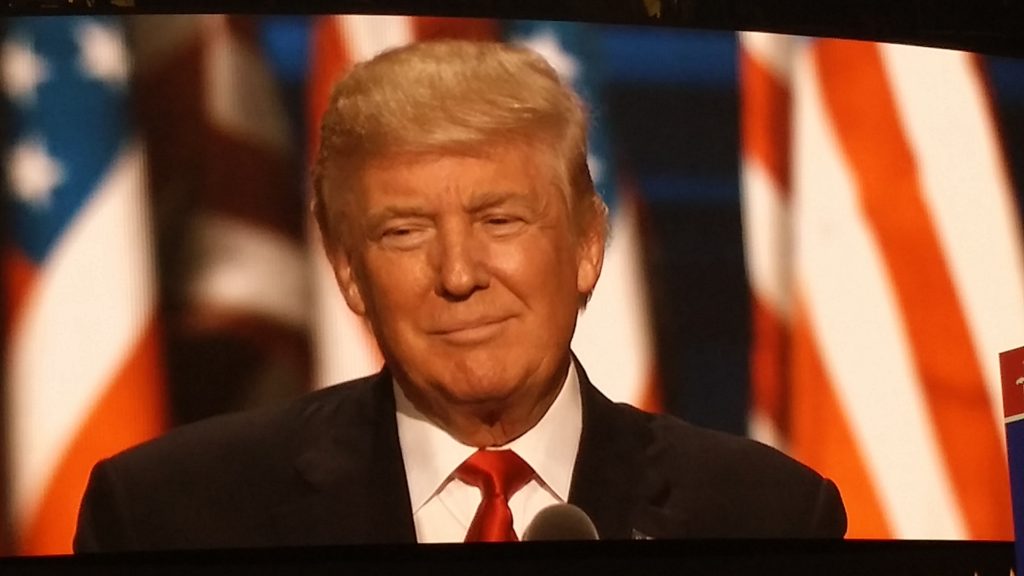 Unfortunately, what I got instead was more of the same things I have heard Trump saying for months now.  Oh, he hit a lot of the points his supporters wanted to hear.  Build the wall, law and order, take care of ISIS, no more wars, Make America Great Again, etc…  What I didn’t hear was any acknowledgement of the issues conservatives care about.

He never once mentioned pro-life issues.  He glossed over his support for Gay rights and transgender bathroom issues.  He mentioned he was going to try and repeal IRS rules that prevent churches and religious institutions from exercising political speech, but said nothing about protecting Christian businesses from exercising their religious beliefs. Overall he gave a fairly good speech (although it was waaay too long), but I think he really missed an opportunity to unite the party and bring wayward conservatives back to the fold.  He is going to need those votes in November.

My opinion was in the minority, though, as the crowd in the hall thoroughly enjoyed the speech.  As the balloons and confetti dropped, I snapped some photos of our Virginia Delegation.  Here is John Whitbeck and his wife. 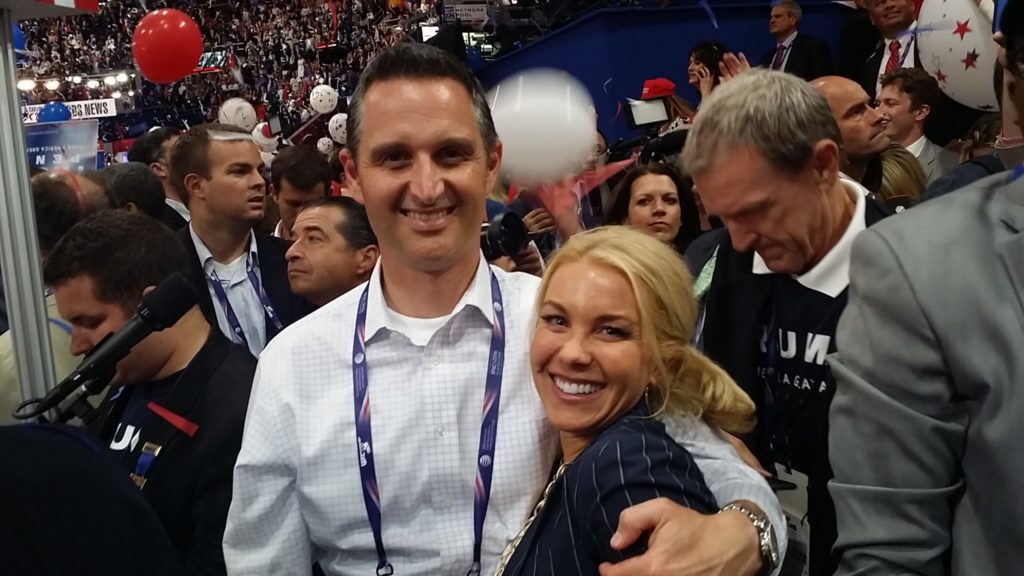 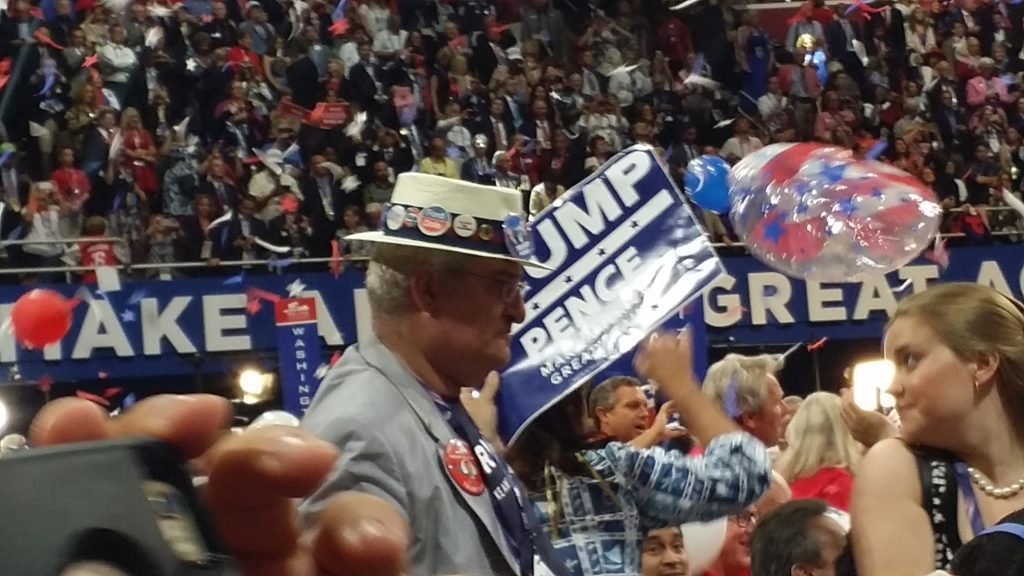 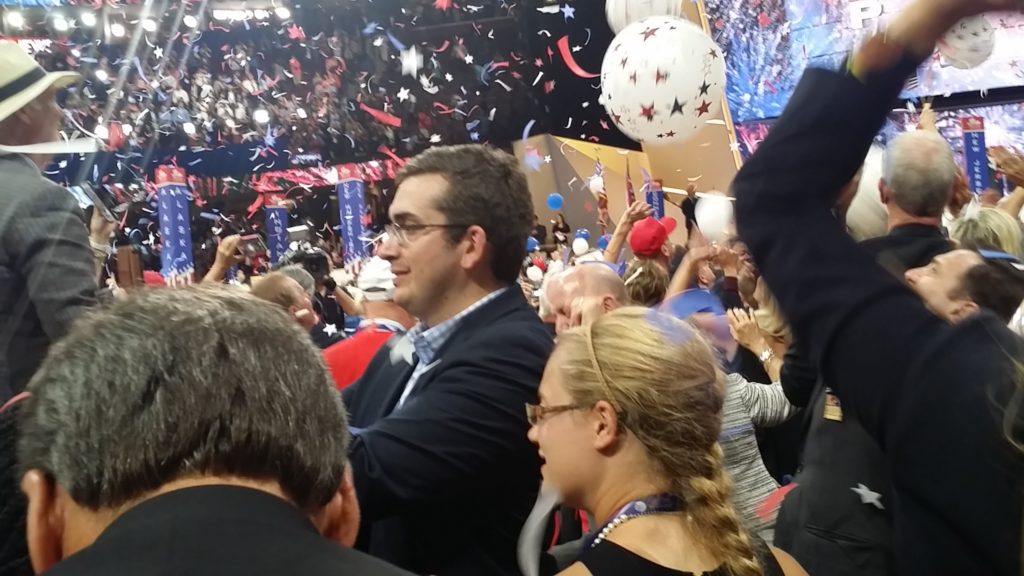 Last but certainly not least, there was a waving Waverly Woods. 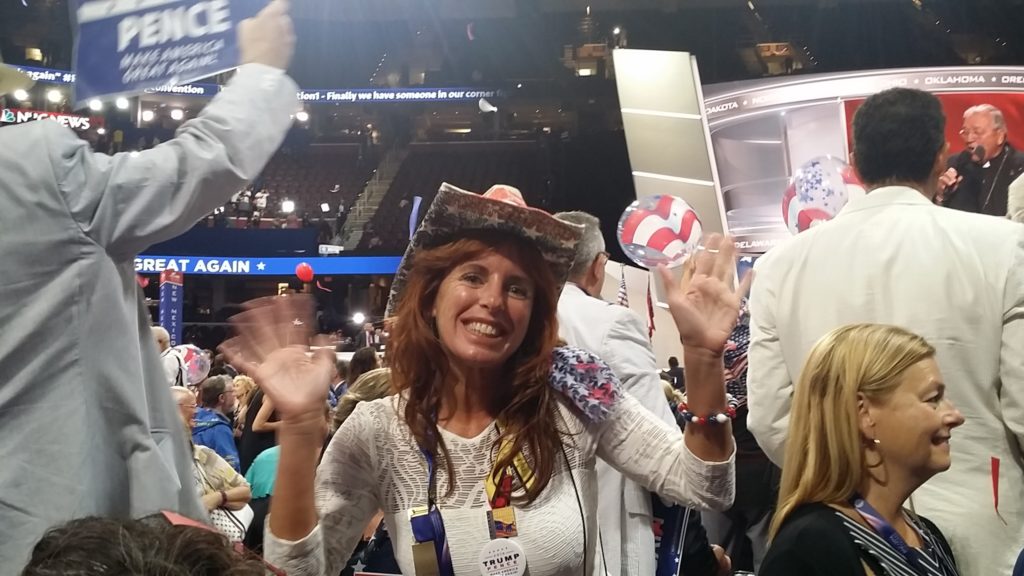 As the night finally came to a close, I thought back on the week.  It was such an amazing experience that was a privilege to be part of.  I was honored to be among so many good people who care so much about this Country.  I spent time with old friends, and met so many new friends I can’t even count. I want to thank all of the people of the 10th District who voted for me to represent them.

The convention is over.  We have a nominee.  Now it’s on to November! 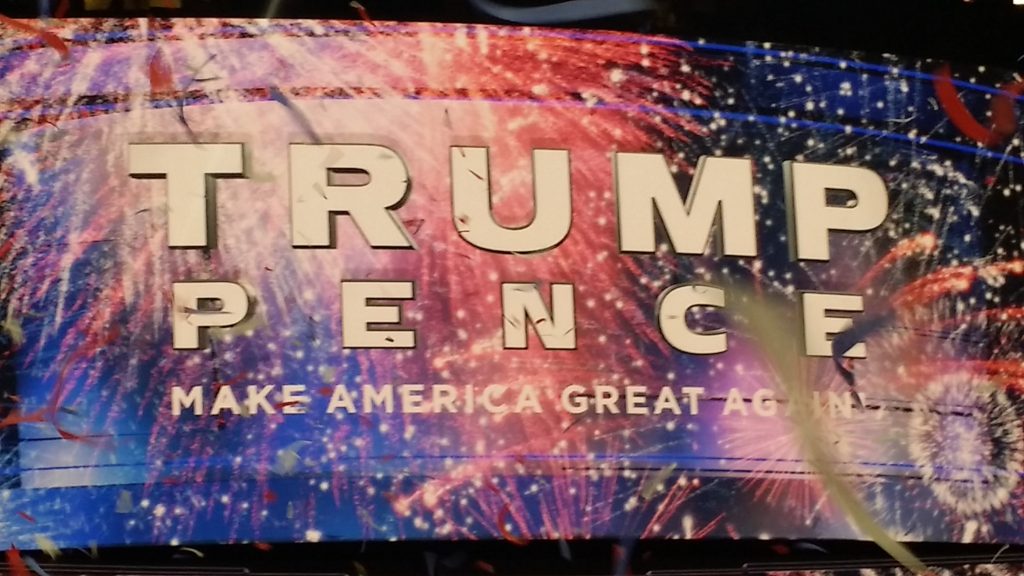 You say the speech was too long and didn’t cover the topics you wanted covered. If he had added them would the speech have been okay or just longer. Isn’t it a Presidents job to appoint Supreme Court Justices that make the social decisions if that is the case the list of 11 eliminates your concerns, doesn’t it? Seems like party unity increased quite a bit in spite of sour pus Ted and his fragile bond.

Trump has already said he could pick someone from that list, or someone else. He’s not committed to any name on that list.

With all of that, what makes you believe that Trump will actually nominate Supreme Court justices that will uphold the values of social conservatives? It is those doubts that make it hard for people to trust Trump on these issues.

I’m stating to think that you’re not super-keen on our nominee. I wasn’t keen on a bunch of them in past elections, nor our current Congressman, but I support them.

Support isn’t concern trolling nor fighting a primary or convention over again when it didn’t turn out the way you like.

It’s not the Mick Staton party and it’s not the Rocinante party. (Although it really should be) we are Republicans and should support our Republican nominees.

You were elected to represent the 10th and did so admirably — it was YOUR convention that elected the best ticket we’ve had since Reagan/Bush.

You (and Dick and Beau and Ken) will have my eternal gratitude for making this ticket happen — it did so on your watch and couldn’t have happened without you! Thank You!

In Defense of Peter Theil, I’m glad to have him within the Republican Party. He’s really good on economic issues and that’s what he cares about. And he’s right regarding the “fake culture wars”. This whole bathroom thing is embarrassing for both sides. No one wins, except for the powers that be that want us distracted by this issue rather than focus on the 19 trillion debt. That’s what Theil was talking about. I don’t think he was referring to abortion, which is an actual issue. He was a big supporter of Ron Paul in 2012 and held a fundraiser for him at his FL house during the last Republican Convention.

Lovely – now I’m thoroughly jealous that I was not there.

GREAT post! Thank you so much for painting this picture of the convention for us.