In today’s mail we received a mailer from candidate Rob Wasinger urging us to vote in Saturday’s primary.  I immediately saw something that is illegal in Virginia.  He clearly doesn’t know the laws of Virginia or even how our political parties work.  This fits with his stance throughout the campaign, to ignore republican gatherings and republican voters.  He doesn’t even almost get it.

I am sure our astute readers will spot the error immediately.  Click to enlarge. 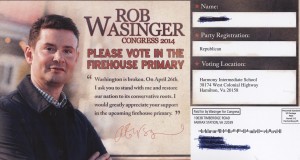 Party Registration is illegal in Virginia. The ad is not illegal but what he says in that section is. One would think a candidate for office would be aware of our election laws.

Its not illegal for a party to register people, maybe its illegal for the state to do it…

It says “Party Registration” but clearly you cant be registered as there is no party registration in Virginia. That said, I don’t think the ad is illegal or violates the law. The only requirement legally is that it say “Paid for by Wasinger for Congress” which it does in the lower right.

It doesn’t violate the law, but it does show ignorance of a basic fact of Virginia politics, which is that there is no official party registration.

Which is doubly odd since anyone who has voted in Virginia should know that!

He needs to go back to Kansas!