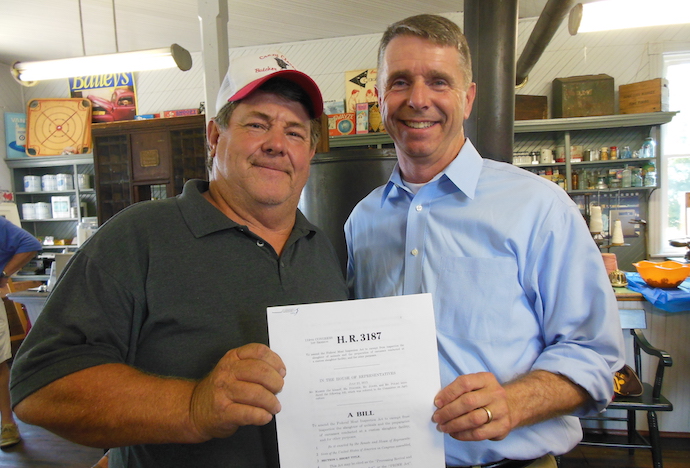 Congressman Rob Wittman has signed onto a bill that will encourage more local production and processing of meat in Virginia. The PRIME Act, H.R. 3187 (Processing Revival and Intrastate Meat Exemption), was introduced by U.S. Representatives Thomas Massie ( R-KY). If enacted, it will make it easier for small farms and ranches to serve local consumers. The Act would give individual states freedom to permit intrastate distribution (within the state) of custom-slaughtered meat including beef, pork, and lamb to consumers, restaurants, hotels, boarding houses, and grocery stores.

With the ever growing demand for local food and consumers wanting to know how their food is produced, they may now likely know where and how it was processed. If this new legislation is passed, consumers will also know the butcher. The bill will allow local “custom processors” to sell meat by the piece or cut instead of whole animals. Current law requires consumers wanting to do business with a local producer to buy the animal and pay for the processing. Purchasing what is typically a year’s worth of meat at one time, along with the cost of a chest freezer is cost prohibitive for most consumers.

In 1967 congress passed the Wholesome Meats Act. Promoted to make meat safer, the Act has actually has done just the opposite, while also driving out the small processing plants, having the effect of increasing concentration and consolidation in the meat industry. Smaller local and regional processors have been crushed under the constantly increasing costs and federal regulations.

Mike Callicrate owner of Callicrate Cattle Company and an expert on federal meat law explains “The biggest packers, who welcome any regulation of costs that disadvantages smaller competitors, have continued to increase their market share and market power, further forcing out locally produced meats. This has left consumers with the big packers industrially produced meat sourced far from their communities and to a large extent, imported from other countries. Additionally, the only meat available is most often produced in factory farms and processed by unskilled, low paid workers.” He continues, “The result of the flawed past policy favoring big food companies over local food suppliers has resulted in unprecedented recalls of contaminated meats and a growing and risky reliance on imported food. And while our nation’s meat has become less safe, less affordable and lower in quality, the small locally owned processors have been forced to comply with costly and burdensome rules that have nothing to do with improved food safety.”

The simply worded three page bill, if enacted, will allow for the processing and distribution “directly to household consumers within the state, or restaurants, hotels, boarding houses, grocery stores, or other establishments located in such State that—are involved in the preparation of meals served directly to consumers; or offer meat and meat food products for sale directly to consumers in the State.”

This bill will not only reacquaint consumers with the local farmer and the local butcher but will also allow the locally owned and operated “mom and pop” restaurants and grocery stores to serve locally raised meats, processed by someone they know and trust, rebuilding our local economies from the soil up.

Wayne Burch owns Crazy Clover Butcher Shop in Middlesex county and has gone through USDA certification emphasizes that farmers need to be able to sell directly to consumers:

The overly burdensome and extremely costly USDA regulations have not made our food safer, but have made it nearly impossible for the small butcher shop to make a profit and remain in business. I thank Rob Wittman for signing onto this legislation. It is a good start in rebuilding our local food economies.

I hope everyone calls to thank Congressman Wittman for sponsoring this important piece of legislation.

This is an extremely worthwhile piece of legislation that not only supports Virginia’s small farmers and ranchers but for the public provides a path for moving our food production source closer to the consumers who are better able to see the quality and care involved in this type of local production. If you ask why is that important to me visit a mass production slaughter house or food processing plant some time and the answer will be self evident to you. Thank you Congressman Wittman you clearly understand that many Virginians still retain a significant investment in maintaining their rural roots and traditions.

Thanks go to Bernadette and Congressman Wittman for producing this very important legislation. I just hope other legislators and their constituents get behind this effort to further strengthen local farmers.

Thanks Rick, can you get your Congressman on board?

Are you listening Congressman Hurt?