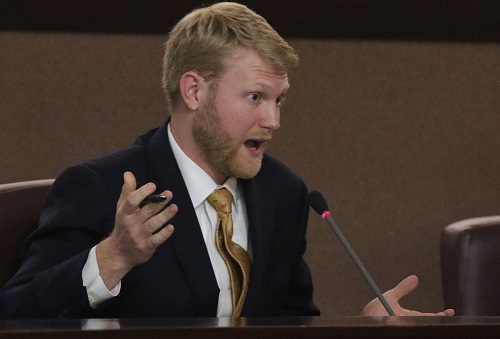 In Ron Meyer’s March 27 mass email, his friend and supporter, Supervisor Matt Letourneau, branded Ron as a “…disrupter” for Ron’s performance in the Senate Transportation Committee hearing of the Greenway Fix bill. Since Matt was not at the hearing, he is conveying this “disrupter” spin, which obviously was fed to him by the disrupter himself, Ron Meyer.

Ron took it upon himself to be part of the hearing of Senator Bill Stanley’s Greenway bill. Ron did certainly disrupt the hearing, but in an entirely unproductive way. Ron’s disruption was so harmful to this important piece of legislation, which had every Senate Republican signed on in support as co-patrons, that a bill that couldn’t fail, did fail.

For what it’s worth, Supervisor Ron Meyer opened his remarks to the Senators with a lie, saying, “I am here on behalf of the Loudoun Board of Supervisors.” Ron was not given that authority. If he had been, he would have been prepared with a proper message.

In our campaign’s latest video featuring Supervisor Matt Letourneau (R-Dulles), who has endorsed our campaign and spoke at our kickoff, he said, “Ron is what I think of as a disrupter — and I mean that in the best possible sense.”

Supervisor Letourneau shares the true story of what happened this year, when a Senator flipped her vote in the Senate Transportation Committee on a bill that would have dramatically lowered tolls on the Greenway:

”     At the last second, as the Committee is about to vote, there’s a lobbyist from the Greenway who is talking to one of the senators. And, lo and behold, when the vote is called, the Senator switches her vote…”

”     “Ron reacted like all of us would. He had just been at the hearing. He had testified at the hearing. He kind of threw his hands up and said, ‘What? Why?’… and immediately there was a big stir. And some Senators said, ‘what is this guy doing?'”

“     They weren’t upset because a Senator had switched their vote because a lobbyist had offered God knows what to do it. They were upset that Ron reacted to it.”

”   So when I say we need disrupters in Richmond, that’s what we need… We need someone who’s not going to be afraid to shake things up a little bit…     It’s time to elect somebody who’s going to go down to Richmond, fight like hell for us every single day, who we know is always going to be on our side.“

Here’s how it really played out.

Disruption one:  What Ron had to say in the hearing was part of the problem. The speech notes Ron pulled from his pocket were not words written with the idea of helping pass the Greenway Fix bill…not at all. What Ron rattled off was primarily directed at his aide, who was crouched down in front of him with a camera phone. The words were written by Ron, for Ron, with the sole intention of being used by Ron to claim responsibility for passage of the Greenway Fix bill. It was a Ron Meyer promotional sound bite, nothing else. The phony show of self-promotion detracted significantly from the credibility of the entire bill presentation.

“…And, lo and behold, when the vote is called, the Senator switches her vote…”

Senate Democrats voted NO for political reasons and one Republican voted NO. If one NO was cast as YES, the bill would have passed.

Did Ron’s self-promotional presentation to the Senate committee cause the vote to fail?  It sure seems that way. It is absolutely certain Ron Meyer “disrupted” the hearing and moved the outcome in the wrong direction.

Ron’s childish behavior “disrupted” his chances of ever being taken seriously in Richmond. He is now regarded as a spoiled child who was never taught self-restraint; in simpler terms, Ron behaved like a kid who had not been disciplined enough as a child. As they say, “You don’t get a second chance to make a first impression.” Senators treat others with respect and dignity; Ron apparently missed that memo.

If Ron had been sent by the Board, his remarks would have been on point and might have helped the bill pass.

Ron’s behavior was all about Ron. The Greenway fix should pass in the future, no thanks to Ron.

Ron Meyer should stay in Loudoun and let adults handle the business in Richmond.